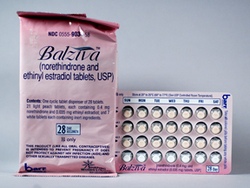 Balziva is a progestin-estrogen birth control drug. This is a monophasic low dose hormonal contraceptive with the possibility to be protected from pregnancies for almost 98%.

Norethisterone acetate and ethinyl estradiol are active synthetic gestagen and estrogen medication. Balziva is a contraceptive for oral administration with a predominant progestin content (however, the progestogen content is relatively small – 0.4 mg). The action of the drug is determined by inhibition of the gonadotropic function of the pituitary gland. Suppressing the production of follicle-stimulating and luteinizing hormones, the drug prevents the maturation of the ovule in the follicle and ovulation, as well as cyclic changes in the endometrium, disrupting its implantation ability.

Due to the combination of estrogen with gestagen, the drug under the appropriate schemes of use can either stimulate or delay menstruation and help stop the acyclic uterine bleeding.

Tablets are taken without interruptions in administration. Women should take one tablet a day, consistently, for 28 days. Each subsequent package should be started the day after the last tablet from the previous package was taken. Bleeding, as a rule, begins on the 2-3rd day after the start of taking inactive tablets and may not yet be completed before the start of the next package.

In the first months of taking Balziva, the following side effects are possible:

Long-term use of the drug in some cases can lead to the appearance of brown spots on the skin and deterioration of the tolerability to the contact lenses.

Skipping inactive tablets can be ignored. Nevertheless, they should be thrown away, so as not to accidentally prolong the period of taking inactive tablets. The following recommendations apply only to the omission of active tablets: if the delay in taking the drug is less than 24 hours, the contraceptive protection is not decreased. A woman should take the missed tablet as soon as possible, and the next tablet is taken at the usual time.

If the delay in taking the tablets is more than 24 hours, the contraceptive protection can be reduced. The more pills are missed, and the closer the skipping of tablets to the phase of taking inactive tablets, the higher the probability of pregnancy is.

Balziva is not prescribed during pregnancy and lactation.

If the pregnancy is diagnosed during the administration of the drug, it should be immediately discontinued. However, extensive epidemiological studies did not discover any increased risk of developmental defects in children born to women who received sex steroids prior to the pregnancy.

Existing data on the results of taking Balziva during pregnancy are constricted, which does not allow us to draw any conclusions about the effect of the drug on the course of pregnancy, the health of the newborn and the fetus. There are no significant epidemiological data on this birth control drug at present. Taking combined oral contraceptives can reduce the amount of breast milk and change its composition, so its use is not recommended until the end of breastfeeding. A small number of sex steroids and/or their metabolites can be excreted with milk.

Product
Friday, September 3, 2021
★★★★★
“ Best pill I've taken for birth control. Gave me the lightest periods I've ever had while being on the pill. I'd still be taking it but insurance is always switching brands.”
- Sonia