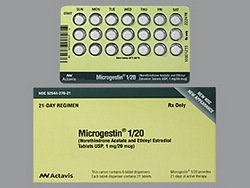 Microgestin 1 / 20 is a birth control drug aiming at providing the suppression of the ovulation. The suppression is carried out by ethinyl estradiol and norethindrone by means of the increase in cervical mucus secretion.

Oral contraception. The following health conditions of the female organism may be treated by this preparation:

Microgestin 1 / 20 has a contraceptive effect. It contains the optimal ratio of 2 hormones – progestogen (norethisterone) and estrogen (ethinyl estradiol). It aims at suppressing the production of gonadotropic hormones, inhibits the maturation of the follicle (the structural and functional ovary element) and ovulation. The birth control drug does not affect the lipid metabolism.

Microgestin 1 / 20 is prescribed for an oral administration. The pattern is 1 tablet daily, starting from the 5th day of the menstrual cycle (that is, the 5th day after the onset of menstruation). The package contains 21 pills, after taking the last one a 7- days break is required. If menstruation is delayed, the diagnosis of pregnancy should be excluded. At the onset of menstruation, the application of the drug is renewed after 7 days the last tablet of the previous cycle is taken. If a regular menstruation does not occur on the background of birth control drug, after the doctor doesn’t confirm pregnancy, the reception is continued.

Breakthrough irregular bleeding is the most common side effect caused by Microgestin 1 / 20 and any other hormonal contraceptive drug.

Adverse reactions are subdivided according to the following frequency of their appearance:

Effect of a combination of ethinyl estradiol + norethindrone on other drugs

Microgestin 1 / 20 can affect the metabolism of other drugs, leading to an increase (eg, cyclosporine) or a decrease (for example, lamotrigine) in their plasma and tissue concentrations.

In vitro, ethinyl estradiol is a reversible inhibitor of CYP2C19, CYP1A1 and CYP1A2, as well as an irreversible inhibitor of CYP3A4 / 5, CYP2C8 and CYP2J2. In clinical studies, the application of a hormonal contraceptive containing ethinylestradiol did not lead to any increase or resulted only in a slight increase in the concentration of CYP3A4 substrates in plasma (eg midazolam), while plasma concentrations of CYP1A2 substrates may increase slightly (for example, theophylline) or Moderately (eg melatonin, tizanidine).

If you miss a dose within 12 hours or less take the pill immediately. If more than 12 hours have passed you should take the pill even if 2 pills simultaneously need to be taken. If you skip the placebo pill just throw it away.

The combination of ethinyl estradiol + norethindrone is contraindicated during pregnancy and breastfeeding.

If the pregnancy is diagnosed when this drug was applied, the reception should be immediately arrested. Extensive epidemiological trials have not discovered an increased risk of developmental defects in children born by women having undergone the course of hormonal contraceptives.

The application of Microgestin 1/20 can reduce the amount of breast milk and change its composition, so its use is contraindicated during breastfeeding. A small amount of sex hormones and/or their metabolites can penetrate into breast milk and affect the the child’s health.