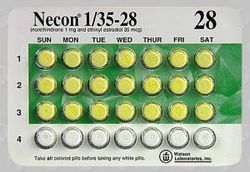 Necon 1 / 35 is a combination birth control pill containing ethinyl estradiol and norethisterone (also known as norethindrone), that are used to prevent pregnancy.

Norethisterone and ethinyl estradiol are active synthetic gestagen and estrogen (respectively). Necon 1 / 35 is a contraceptive with a predominant progestogen content (however, the progestogen content is relatively small). The action of the drug is determined by inhibition of the gonadotropic function of the pituitary: the active substances inhibit the production of follicle-stimulating and luteinizing hormones, the drug prevents the maturation of the ovule in the follicle and ovulation, as well as cyclic changes in the endometrium, disrupting its implantation ability.

Due to the combination of estrogen with gestagen, the medication can both stimulate and delay menstruation (under the appropriate schemes of use) and help stop the acyclic uterine bleeding.

Each Necon 1 / 35 pack contains 28 pills: 21 active pills containing 1 mg of norethindrone and 35 mcg of ethinyl estradiol, followed by 7 inert pills that do not contain any medication.

The schedule for taking the drug for contraception is similar to that for other commonly used hormonal contraceptives. Taken 1 tablet per day for 28 days, without interruption. Menstrual bleeding occurs 2-3 days after you started taking inert pills (pills 22-28 in the blister). When switching to Necon 1 / 35 from another combined oral contraceptive, the first pill should be taken on the first day of the menstrual period.

The package may also contain 21 tablets. In this case, there are no reminder (hormone-free) tablets. Take 1 tablet daily for 3 weeks. Then don’t take any tablets for 7 days. You’ll get your period during the fourth week while you aren’t taking any hormone-containing tablets.

To ensure a constant level of hormones in the blood plasma interval between doses of the contraceptive should not exceed 36 hours.

In the treatment of gynecological disorders, the dose of the drug is established in each case individually, depending on the indications.

In some cases, Necon 1 / 35 tablets can the following side effects:

Long-term use of the drug in some cases can lead to brown spots on the skin and deterioration of the tolerability of contact lenses.

The drug is contraindicated in the following conditions:

The use of Necon 1 / 35 before pregnancy does not increase the risk of various fetal defects. Unintentional use of the oral contraceptive in the early stages of pregnancy does not have a teratogenic or mutagenic effect on the fetus.

If you’re on a birth control pill and you get pregnant during your period, the drug should be canceled.

Ethinyl estradiol and norethisterone inhibit lactation. A small amount of these substances can penetrate into breast milk.

Missing an active pill of Necon 1 / 35 may cause menstrual bleeding.

One package of the drug is intended for use during a single menstrual cycle (“calendar” packaging). With special care and strict indications the contraceptive should be used in diabetes mellitus, arterial hypertension, varicose veins, phlebitis, otosclerosis, multiple sclerosis, epilepsy, liver diseases, endometriosis, Sydenham’s disease.

Use of Necon 1 / 35 should be discontinued in the following cases:

The use of hormonal contraceptives increases the risk of developing thromboembolic diseases, which is exacerbated by cardiovascular risk factors (smoking, high blood pressure, impaired blood clotting and lipid metabolism, overweight). Given the risk of complications such as myocardial infarction, stroke, women over the age of 35 should either quit smoking or use other birth control methods.

Due to the fact that a number of drugs can reduce the contraceptive effect of Necon 1 / 35, additional contraceptive methods should be used during treatment and 7 days after it’s completed (eg, local). If it is necessary to take other medications on a regular basis, a doctor should be informed of the use of ethinyl estradiol and norethisterone contraceptives.

The effectiveness of the medication may be reduced by regular excessive alcohol consumption.

Before taking the drug and every six months during treatment, it is necessary to carry out examinations including gynecological control, breast examination, liver function, blood pressure and blood cholesterol control, urinalysis.