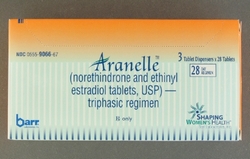 Aranelle is a birth control pill used to prevent pregnancy. The drug contains 2 female hormones, ethinyl estradiol and norethindrone, which are hormonal contraceptives.

The drug has a depressing effect on the gonadotropic function (effect on the ovaries) of the pituitary gland (a gland of internal secretion located in the brain): norethisterone acetate reduces the release of the luteinizing (causing the formation of the ovary’s yellow body) hormone. Ethinyl estradiol is a foldiculostimulating (hormone-stimulating hormone) hormone that inhibits ovulation (the exit of a mature egg from the ovary).

Aranelle is intended for oral administration. The pack contains 21 active tablets (ethinyl estradiol and norethindrone) and 7 inert tablets (no hormones).

Take 1 tablet per day for 28 days without interruption, approximately at the same time of a day, with a small amount of water, in the order indicated on the blister pack. Begin a new pack the day after taking the last tablet from the previous package.

In some cases, Aranelle can cause the following side effects:

Aranelle tablets are contraindicated in the presence of any of the conditions listed below:

If you have any of the conditions/risk factors listed below, use Aranelle contraceptive with caution:

The interaction of oral contraceptives with other drugs can lead to “breakthrough” bleeding and / or a decrease in contraceptive reliability. Women taking these drugs should temporarily use additional methods of contraception.

The drug is contraindicated for use during pregnancy. When a pregnancy occurs against the background of taking this contraceptive, you must immediately stop taking it. The available data on the use of Aranelle during pregnancy are too limited and do not allow to draw a conclusion about its negative effect on pregnancy or on the health of the fetus or newborn.

Aranelle is contraindicated during breastfeeding. Ethinyl estradiol and norethindrone can reduce the amount of breastmilk and change its quality. A small amount of sex hormones can penetrate into breast milk and affect the baby.

In some cases, you may not have a menstruation after the period in which you missed active pills. However, if you have no menstruation for 2 months in a row, you should exclude pregnancy.

If you have any questions about your schedule, consult your doctor.

Before taking the tablets and every 6 months during treatment, it’s recommended to undergo a general medical and gynecological examination (including gynecological control, breast examination, liver function, blood pressure control and cholesterol concentration in the blood, urine analysis, cytological smear analysis).

The use of Aranelle after childbirth is recommended only after the first normal cycle.

The drug should be discontinued immediately in the following cases:

The efficiency of the contraceptive effect decreases with regular excessive intake of ethanol.

Moderate spotting during the contraception course does not require discontinuation of Aranell. If you have a severe bleeding, stop taking birth control pills and undergo a gynecological examination.

Diarrhea and vomiting can reduce a contraceptive effect of the drug. In this case, you need to use additional non-hormonal birth control methods).

Smoking women have an increased risk of developing vascular diseases with serious consequences (myocardial infarction, stroke). The risk increases with age and depends on the number of cigarettes smoked per day (especially in women over 35 years of age).

Ethinyl estradiol and norethindrone may change the results of skin allergic tests, decrease the concentration of LH and FSH.