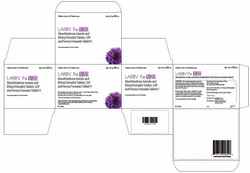 Larin Fe 1 / 20 is a microdose birth control medication. It is produced to prevent an unwanted pregnancy in women being sexually active.

Larin Fe 1 / 20 is intended to protect women from an unwanted pregnancy.

The contraceptive effect of the drug Larin Fe 1/20 is carried out through complementary mechanisms. The most important effect is the ovulation suppression The second effect lies in the increase in the cervix secretion viscosity, which results in difficulty for spermatozoa to penetrate the uterus.

With accurate drug use, the Pearl Index is less than 1. If you miss a dose or use the drug incorrectly, Pearl’s index may magnify.

The antiandrogenic effect of a combination of ethinyl estradiol and norethindrone is based on a decrease in plasma androgen concentration.

Larin Fe 1/20 should be taken in the order specified on the blister, every day at about the same time. The regimen includes 1 tablet daily for 28 days in a raw. The application of each next package starts the day after taking the last pill from the previous package. Menstruation-like hemorrhage usually starts on the 2-3rd day of taking placebo pills and may not end before starting a new package.

The contraindications specified on the blister of Larin Fe 1 / 20 are:

Side effects, the appearance of which requires immediate withdrawal of Larin Fe 1 / 20 are:

In the case of the other side effects, less severe, but more common the feasibility of continuing the use of the drug is decided individually after consulting a doctor assessing the benefit/risk ratio.

It is possible to combine Larin Fe 1 / 20 with drugs that induce hepatic microsomal enzymes, as a result of which the clearance of sex hormones can increase, which, in turn, can result in “breakthrough” uterine bleeding and/or to a decrease in the contraceptive effect.

For women who receive treatment with such drugs together with this birth control, it is recommended to use a barrier method of contraception or choose a different non-hormonal method of contraception. Barrier contraceptive method should be used during the entire period of taking concomitant drugs, as well as within 28 days after their discontinuation.

The missing of placebo pills can be neglected.

If the delay in taking the pill was less than 24 hours, the reliability of contraception is not reduced; Larin Fe 1 / 20 must be taken as soon as possible, and the following tablets should be taken at the usual time.

If the delay in taking the pill is more than 24 hours, the contraceptive protection will be reduced. The additional birth control methods should be applied.

Larin Fe 1/20 is contraindicated when you are diagnosed with pregnancy. The breastfeeding should be stopped when taking birth control drugs.