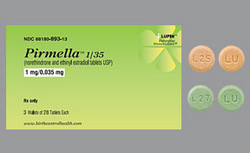 Pirmella 1/35 (ethinyl estradiol and norethindrone) is used as contraception to prevent pregnancy.

The drug prevents ovulation (the release of an egg from an ovary), causes changes in the cervical mucus and uterine lining, making it difficult for sperm to enter the uterus and difficult for a fertilized egg to attach to the uterus.

Each pack of Pirmella 1/35 contains 28 tablets:

Follow the instruction for use given on the leaflet. Do not take this drug in larger or smaller amounts or for longer than recommended by a doctor.

You can take the first pill on the first day of your period (the day when menstrual bleeding begins) or on the first Sunday following the onset of your period. If you are a Sunday starter, you need to use an additional non-hormonal method of birth control (a condom or a spermicide).

Take one pill every day, at about the same hour, for 28 days in a row. When you take the last pill from the blister, start a new pack next day. You may become pregnant if you miss pills.

Some women have acyclic breakthrough bleeding, especially during the first three months. Consult your doctor if this bleeding continues or is very heavy.

Switching from other birth control pills:

Switching from a vaginal ring or a hormonal patch:

Take the first pill on the day when you need to use a new vaginal ring or a new patch.

Switching from an intrauterine device:

Take the first pill on the day your an intrauterine device is removed. Use an additional non-hormonal method of birth control for 7 days.

Use of Pirmella 1/35 after an abortion:

After an abortion up to 12 weeks, you can take the first pill on the day of the operation. If the abortion was late (more than 12 weeks), 6you can start taking pills 21-28 days after it. Use an additional non-hormonal method of birth control for 7 days. If you had unprotected sexual intercourse before you started taking pills, you can start hormonal contraception only after you make sure you are not pregnant.

Use of Pirmella 1/35 after childbirth:

Take the first pill 21-28 days after delivery. Use an additional non-hormonal method of birth control for 7 days. If you had unprotected sexual intercourse before you started taking pills, you can start hormonal contraception only after you make sure you are not pregnant. If you are breastfeeding, do not use this drug.

Overdosage of ethinyl estradiol and norethindrone may cause nausea, vomiting, vaginal bleeding, spotting. There are no data on the occurrence of any severe adverse effects in the case of overdose. Treatment is symptomatic. There is no specific antidote.

Pirmella 1/35 is usually tolerated well. In rare cases, the contraceptive may cause the following side effects (mostly mild and temporary):

If you experience any severe/lasting side effects, stop taking birth control pills and consult a doctor as soon as possible.

Pirmella 1/35 may interact with some drugs. As a result, the clearance of sex hormones may increase, which may lead to acyclic breakthrough uterine bleeding and/or a decrease in the contraceptive effect.

Do not use this contraceptive with the following drugs:

Do not use Pirmella 1/35 for birth control during pregnancy because there is no reason for that. If pregnancy occurs when on the pills, stop using hormonal contraception immediately and consult a doctor. However, epidemiological studies have not revealed an increased risk of defects in children born to women who used sex hormones before pregnancy or used these hormones in the early stages of pregnancy.

Taking drugs based on ethinyl estradiol and norethindrone can reduce the amount of breast milk and change its composition, therefore, the use of Pirmella 1/35 during breastfeeding is not recommended. Breastfeeding women should choose a non-hormonal method of birth control.

Try not to miss pills since this increases your risk of becoming pregnant.

While taking combination oral contraceptives, you will need to visit your doctor regularly (at least 2 times per year).

Pirmella 1/35 will not protect you from sexually transmitted diseases, such as HIV and AIDS. For this purpose, you need to use a condom.

Use a backup birth control method if you have severe vomiting or diarrhea.

Store at room temperature away from direct sunlight, moisture and heat.

Keep out of reach of children and pets.