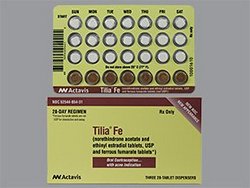 Tilia Fe is prescribed as the means to prevent pregnancy.

The contraceptive effect of this birth control drug, as well as other combined oral contraceptives, is based on the combination of various factors. This combination includes the suppression of ovulation and the change in cervical mucus secretion.

The progestin – norethindrone suppresses the synthesis of gonadotropic hormones, to a greater degree – LH, thus prevents the maturation of the follicle implying the blockade of ovulation.

The estrogen component of the drug – ethinyl estradiol – a synthetic analog of the follicular hormone known as estradiol, regulates the menstrual cycle.

Along with these central and peripheral mechanisms that prevent the maturation of an oocyte capable of fertilization, the contraceptive effect is maintained due to an increase in the cervix secretion viscosity, which makes it difficult for sperm to penetrate the uterine cavity.

In addition to Tilia Fe contraceptive properties have a number of effects that can be considered when choosing a method of contraception. Menstruation becomes more regular, less painful.

Taking combined oral contraceptives with a content of ethinyl estradiol reduces the risk of developing ovarian and endometrial cancers.

Tilia Fe is a course including 28 pills with a various hormone dosage. The regimen is specified on the blister. Every pill should be taken at one and the same time washed down with a glass of water. The latter 7 pills contain ferrous fumarate which application provokes the beginning of the menstruation. If you have any questions it is better to contact your gynecologist.

Tilia Fe, as any other birth control drug, has a number of contraindications about which you should inform your doctor. These are the following medical conditions:

Hepatic metabolism: interactions with inducers of liver microsomal enzymes may be possible which can facilitate to an increase in the clearance of sex hormones (for example, hydantoins, barbiturates, primidone, carbamazepine, rifampicin; and also oxcarbazepine, topiramate, felbamate, ritonavir, ketamine, felbamate, ceramide; rifabutin and preparations containing St. John’s wort). The maximum induction of microsomal enzymes is not manifested in the first 2-3 weeks of taking the combination of norethindrone + ethinyl estradiol, but it can be maintained for at least 4 weeks after the drug discontinuation. A violation of the contraceptive effect was also reported when taking the combination of norethindrone + ethinyl estradiol with antibiotics such as ampicillin and tetracyclines. The mechanism of this effect is unclear.

Ascorbic acid may increase the concentration of ethinyl estradiol in the blood plasma, possibly due to inhibition of conjugation.

COCs can affect the metabolism of other drugs and, accordingly, change their concentrations in blood plasma and tissues: increase (for example, cyclosporine) or decrease (lamotrigine, salicylic acid, morphine).

Missing a placebo pill from the fourth row in a blister can be neglected.

The given recommendations are related only to the missing of the active pills. If the delay in Tilia Fe intake was less than 24 hours, the contraceptive reliability is not reduced. A woman should take the missed pill as soon as possible and take the next pill at the usual time.

If the delay in taking the Tilia Fe pills is more than 24 hours, contraceptive reliability can be decreased. The more skipped pills and the closer the pill missing to the inactive placebo pills, the chance of becoming pregnant is higher.

The use of Tilia Fe during pregnancy is contraindicated. In the event of pregnancy when using this birth control drug it should stop taking it. The drug can affect lactation because COCs reduce the amount and change the composition of breast milk. The drug is contraindicated until the termination of breastfeeding. Small amounts of sex hormones and/or their metabolites can be excreted in breast milk.