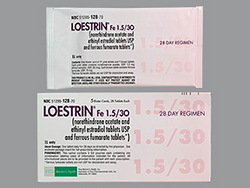 The mechanism of action is based on a change in the secretion of cervical mucus and inhibition of ovulation, thereby providing a contraceptive effect. In addition, the drug reduces the intensity and pain during menstruation, prevents the risk of iron deficiency anemia.

Each Loestrin Fe 1.5 / 30 pack contains 21 active tablets (with hormones) and 7 inert tablets (“reminders”). They should be taken orally in the order indicated on the package, every day at about the same time, with a small amount of water. Take 1 tablet per day, for 28 days. Taking the pills from the next pack begins without any breaks. “Withdrawal” bleeding usually starts 2-3 days after taking the last active pill and may not end before taking the pills from a new pack.

If a woman has decided to switch to Loestrin Fe 1.5 / 30 from another oral contraceptive, the drug should be taken the next day after the end of the previous one.

When switching from contraceptives containing only gestagens (implant, mini-pills, injection), you can start taking the drug on any day (the implant – on the day of its removal, the injection – on the day when the next injection is planned). At the same time, you need to use additional contraceptives for 7 days.

After childbirth or an abortion in the II trimester, the drug should be started in 21-28 days.

If a woman has been sexually active before taking birth control pills, she needs to wait until her menstruation.

No serious side effects from an overdose of Loestrin Fe 1.5 / 30 have been reported.

Symptoms may include nausea, vomiting and, slight vaginal bleeding.

There is no specific antidote; treatment should be symptomatic.

The following adverse reactions were reported in women taking this contraceptive, but their relationship with the drug was neither confirmed nor disproved:

In rare cases, women reported chloasma (especially those with a history of chloasma during the previous pregnancy).

Loestrin Fe 1.5 / 30 should not be used for birth control in the presence of any of the conditions listed below:

If any of these conditions develop while taking combination oral contraceptives, stop taking the medication immediately and consult your doctor.

If you have any of the following conditions, you should use birth control pills with caution:

Drug interactions, which increase the clearance of sex hormones, can lead to breakthrough uterine bleeding or a decrease in contraceptive reliability. This has been established for hydantoins, barbiturates, primidone, carbamazepine and rifampicin. There is also a suspicion of oxcarbazepine, topiramate, felbamate and griseofulvin. The mechanism of this interaction is based on the induction of hepatic enzymes by these preparations.

Contraceptive reliability is reduced when taking antibiotics such as ampicillin and tetracycline. The mechanism of this action is not clear.

Women receiving any of the above drugs should temporarily use a backup method of contraception during their concomitant use with Loestrin Fe 1.5 / 30 and 7 days after their withdrawal. When taking rifampicin and for 28 days after its cancellation, a backup method of contraception should be used. If the use of these drugs is started at the end of the contraceptive’s pack, the next pack should be started without taking inert tablets.

Women who are taking these drugs for a long time should be recommended other (non-hormonal) methods of contraception (for example, a condom).

Loestrin Fe 1.5 / 30 is contraindicated during pregnancy and breastfeeding. If pregnancy is revealed while taking the drug, it should be immediately withdrawn.

Combined oral contraceptives can reduce the amount of breast milk and change its composition, therefore, they should not be used during lactation.

The medication is indicated for use only after the onset of menarche.

In the case of missing an active pill, you need to take it immediately as soon as you remember, even if it means taking a double dosage. If the interval does not exceed 12 hours, the contraceptive effect does not decrease, if more than 36 hours have passed since the last active pill was taken, you should take the missed pills and use additional contraceptive agents in the first 7 days.

If you missed an inert pill, discard it and continue taking 1 pill every day at your usual time.

The contraceptive is not indicated for use in women after menopause.

Before taking the pills, a woman needs to undergo a thorough physical examination, including a study of the mammary glands and cervical mucus, to normalize blood clotting, exclude pregnancy. This examination should be conducted regularly, at least once a year.

This drug does not protect against HIV and other sexually transmitted infections.

Combined oral contraceptives cause a slight increase in the incidence of venous and arterial thrombosis and thromboembolic processes, such as myocardial infarction, deep vein thrombosis, pulmonary thromboembolism and cerebrovascular disorders. These processes occur in very rare cases. The risk of thrombosis increases with high blood pressure.

Patients taking Loestrin Fe 1.5 / 30 can experience irregular bleeding (spotting), during the first month of use.

If you have diarrhea or vomiting 3-4 hours after taking an active pill, take an additional pill of the contraceptive from another package.

In order to postpone the onset of menstruation, a woman can start a new pack without taking inert pills from the previous blister.

The most important risk factor for cervical cancer is the human papillomavirus (ASL). With long-term use of the drug, the risk may increase, but this information is contradictory.

Norethisterone and ethinyl estradiol can affect the results of some laboratory tests, including indicators of liver function, kidney, thyroid, adrenal glands, the level of transport proteins in the blood plasma, carbohydrate metabolism, coagulation parameters and fibrinolysis. The changes usually do not go beyond the normal levels.

The drug is discontinued 6 weeks before the scheduled surgical intervention, with prolonged bed rest.

Loestrin Fe 1.5 / 30 does not affect the ability to drive vehicles and operate other complex mechanisms.