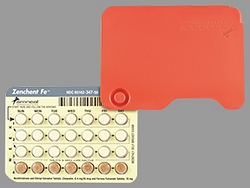 Zenchent Fe is a monophasic birth control drug. The course duration is 28 pills. It contains 2 female hormones progestin and estrogen.

Zenchent Fe belongs to a combined oral contraceptive drug containing norethindrone and ethinyl estradiol. The contraceptive effect is conducted by suppression of ovulation, an increase in the cervical secretions’ viscosity. The change in viscosity makes it difficult for spermatozoa to penetrate the uterine cavity. It also changes the endometrium that prevents fertilized egg implantation.

Zenchent Fe is prescribed for an oral application. The continuous application lasts for 28 days. 1 pill per day should be taken at the same time in the order specified on the package. The pill is washed down with water. The placebo pills (latest 7) will provoke menstruation. If it doesn’t come for several months it is necessary to address healthcare giver to exclude pregnancy.

Zenchent Fe is contraindicated in the following medical states about which your doctor should be informed:

As with other COCs, the following side effects may develop for women:

The interaction of oral contraceptive drugs with some medications can result in breakthrough bleeding. There is also a decrease in contraceptive reliability.

The reliability of the drug may decrease if a woman misses taking a pill containing norethindrone and ethinyl estradiol, and especially if a woman forgets taking the first pills from the blister.

If the delay in taking the drug was less than 12 hours, the contraceptive reliability is not affected. A woman should apply a tablet as soon as possible, the next tablet is applied at the time preferred.

If the missing of one or several active pills is for more than 12 hours, the contraceptive reliability may be decreased. It is necessary to use backup birth control methods.

In this case, a woman should be guided by the following 2 main regulations:

Zenchent Fe is contraindicated during pregnancy as it may result in developmental defects of the future newborn. It is also required to withdraw the medication during breastfeeding.