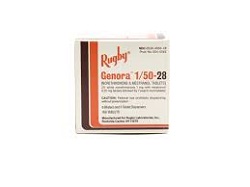 Genora 1/50 is a combined birth control containing norethindrone and ethinyl estradiol. It is prescribed for the prevention of unwnated pregnancy. It suppresses ovulation within a 28-days course.

Genora 1/50 is prescribed as a contraceptive means.

Genora 1/50 is an oral combination drug with antiandrogenic effect, contains norethindrone and ethinyl estradiol. Contraceptive effect of the drug is achieved due to various factors. The most important factors are inhibition of ovulation, increased viscosity of cervical mucus, changes in the motility of the fallopian tubes and the structure of the endometrium. The antiandrogenic effect of the combined oral contraceptive is based on a decrease in the concentration of androgens in plasma. Numerous studies have shown that taking this birth control drug led to the alleviation of symptoms of mild and moderate acne and had a positive outcome in patients with seborrhea.

This drug is taken daily as a course at one and the same time. The pill should be washed down with water. The treatment course is 28 days. No breaks are prescribed.

Get acquainted with possible contraindications in the list below:

Interactions associated with the activation of microsomal enzymes between oral contraceptives and other drugs can result in breakthrough bleeding and/or reduce the contraception effectiveness. These effects have been shown for hydantoin, phenobarbital, primidone, carbamazepine, and rifampicin. Such effects are also possible for rifabutin, efavirenz, nevirapine, oxcarbazepine, topiramate, felbamate, ritonavir, griseofulvin and herbal drugs – drugs of St. John’s wort (Hypericum perforatum). The mechanism of these interactions is based on the ability of these drugs to activate microsomal liver enzymes.

According to clinical observations, the simultaneous administration of certain antibiotics (such as ampicillin and tetracycline) can lead to a decrease in the effectiveness of contraception.

Women taking rifampicin should use barrier methods during the time they take rifampicin and 28 days after withdrawal. If the concomitant drug is taken at the end of the package, the next package should be started immediately, without the usual break.

Drug interactions that enhance the clearance of sex hormones can lead to breakthrough uterine bleeding and a decrease in the contraceptive effectiveness of the drug.

Genora 1/50 is contraindicated during pregnancy. If pregnancy occurs during drug use, then a woman should immediately withdraw the drug. Available information regarding the use of the drug during pregnancy is too limited to draw conclusions about the negative effects of the drug for pregnancy, fetal and newborn health. Extensive epidemiological studies have not revealed an increased risk of developmental defects in children born to women who took sex hormones for contraception before pregnancy or by negligence in the early stages of pregnancy. It is contraindicated for use in breastfeeding women.