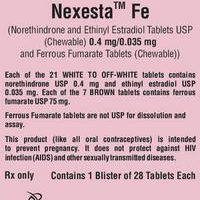 Nexesta Fe (ethinyl estradiol/norethindrone) is a combination chewable drug which is used to prevent pregnancy.

The drug works by inhibiting the ovulation, slowing the release of the egg in the ovary and preventing pregnancy.

Tablets may be swallowed whole or chewed and swallowed. If you chew the tablet, you should drink a glass of water after swallowing.

You may start using the drug either on Day 1 of your period or be a Sunday starter. For the first cycle of a Sunday Start regimen, you need to use an additional birth control method for the first 7 days.

Switching to Nexesta Fe from another COC:

Take the first tablet on the same day that a new pack of the previous COC would have started.

Take the first tablet on the day when next application/insertion/injection would have been scheduled.

Take the first tablet on the day of IUD removal. If the IUD is not removed on the first day of the period, use an additional backup contraceptive method for the first 7 days of the first cycle pack.

Switching from an implant:

Take the first tablet on the day of an implant removal.

After a first-trimester abortion or miscarriage, you can start using the contraceptive immediately. An additional barrier method of birth control is not required if the drug is started within 5 days after termination of the pregnancy.

If the drug is not started within 5 days after termination of the pregnancy, you should use an additional barrier method of birth control for the first 7 days of your first cycle pack.

Do not start using birth control pills until 4 weeks after a second-trimester abortion or miscarriage since you have an increased risk of thromboembolic disease.

Do not start taking the tablets until 4 weeks after childbirth since you have an increased risk of thromboembolic disease. If you have not yet had a period postpartum, you need to exclude the possibility of conception occurring prior to use of the drug.

Do not take an excessive dose of the drug. Overdosage may cause a headache, nausea, vomiting, difficulty breathing, spotting/bleeding. If you have any disturbing/lasting/severe reactions after taking an excessive dose of ethinyl estradiol and norethindrone, contact your doctor as soon as possible.

Nexesta Fe is usually tolerated well. In some cases, it may cause the following side effects:

If you have any disturbing/lasting/severe adverse reactions after taking COCs, contact your doctor as soon as possible.

Do not use Nexesta Fe for birth control if you have any of the following conditions/diseases:

Do not mix Nexesta Fe with any of the following drugs:

Before using this drug, tell your doctor about all medications that you are taking because you may need to use an additional method of preventing pregnancy.

There is no reason to use Nexesta Fe during pregnancy. Do not use the drug in breastfeeding period because the active components can enter the breast milk and affect the baby.

You should use an additional non-hormonal birth control method if you have sex within 7 days after missing the tablets.

If you miss any of the inactive tablets in Week 4:

If you have any of the conditions, diseases, or risk factors listed below, then the potential risk and the expected benefits of using Nexesta Fe should be discussed with your doctor. In any of these conditions, diseases, or risk factors occurs for the first time, consult your doctor immediately. You may need to stop using the drug.

Diseases of the cardiovascular system

The risk of venous thromboembolism is especially high in the first year of using such drugs. The increased risk is also present after you resume hormonal contraception after a break lasting 4 weeks or more.

Venous and arterial thrombosis can be life-threatening or fatal in 1-2% of cases.

Symptoms of pulmonary thromboembolism include difficulty breathing or rapid breathing; a sudden cough; acute pain in the chest; a sense of anxiety; severe dizziness; a rapid or irregular heartbeat.

Arterial thromboembolism can lead to stroke, vascular occlusion, or myocardial infarction. The symptoms of a stroke include sudden weakness or loss of sensitivity of the face, limbs, especially on one side of the body, sudden confusion, problems with speech and understanding; sudden one or two-sided vision loss; sudden gait disturbance, dizziness, loss of balance or coordination of movements; sudden, severe, or prolonged headache for no apparent reason; loss of consciousness or fainting with or without an epileptic seizure. Other signs of vascular occlusion include sudden pain, swelling and weak blueing of the extremities, the acute stomach symptom complex.

Symptoms of myocardial infarction include pain, discomfort, pressure, heaviness, feeling of compression or distension in the chest or behind the sternum; cold sweat, nausea, vomiting or dizziness, severe weakness, anxiety, shortness of breath; a rapid or irregular heartbeat. Arterial thromboembolism can be life-threatening or fatal.

Women with a combination of several risk factors have a higher degree of risk. In this case, the use of Nexesta Feis contraindicated. The risk of thrombosis and thromboembolism or cerebrovascular disorders increases:

The increased risk of developing thromboembolism in the postpartum period should be considered.

The increase in the frequency and severity of a migraine during the use of the COC is the reason for the immediate discontinuation of the drug.

The most important risk factor for cervical cancer is persistent HPV infection. There are reports of some increase in the risk of cervical cancer with prolonged use of COCs. However, the relationship with the intake of COCs is not proven. There are contradictions regarding the extent to which these data are associated with screening for cervical pathology or with the characteristics of sexual behavior.

A meta-analysis of 54 epidemiological studies has shown that there is a slightly increased relative risk of developing breast cancer diagnosed in women who are currently taking COC. The increased risk gradually disappears within 10 years after the cancelation of these medications.

Women with hypertriglyceridemia (or a predisposition to this condition) may have an increased risk of pancreatitis while taking COCs.

The following conditions may develop or worsen both during pregnancy and when taking COCs but their relationship with Nexesta Fe has not been proven: jaundice, itching associated with cholestasis, gallstones, porphyria, systemic lupus erythematosus, hemolytic uremic syndrome, Chorea Sydenham, herpes during pregnancy, hearing loss associated with otosclerosis, depression, epilepsy, Crohn’s disease, ulcerative colitis.

Women with hereditary forms of angioedema have an increased risk for angioedema.

Although COCs may affect insulin resistance and glucose tolerance, the need for dose adjustment of hypoglycemic drugs in diabetic patients using low-dose combined oral contraceptives is usually not needed. However, diabetic patients should be carefully monitored while taking COCs.

Women with a history of pregnant chloasma have an increased risk of chloasma development. Women with a tendency to chloasma who are taking Nexesta Fe should avoid prolonged exposure to the sun and ultraviolet radiation.

Sex hormones can promote the growth of certain hormone-dependent tissues and tumors.

Taking ethinyl estradiol/norethindrone tablets may affect the results of some laboratory tests, including indicators of liver function, kidney, thyroid, adrenal glands, the concentration of transport proteins in the blood plasma, carbohydrate metabolism, clotting parameters and fibrinolysis. Changes usually do not go beyond the limits.

The effectiveness of Nexesta Fe can be reduced in the following cases: when you miss active pills, have gastrointestinal disorders or take certain medications (see “Interactions”).

Frequency and severity of menstrual bleeding

If irregular bleeding recurs or develops after the previous regular cycles, a thorough examination should be performed to exclude malignant tumors or pregnancy.

Some women may not have “withdrawal” bleeding during a period of taking inactive pills. If the contraceptive was taken as recommended, it is unlikely that the woman is pregnant. However, if the drug was used irregularly or you miss two “withdrawal” bleeding in a row, you need to exclude pregnancy as soon as possible.

Control examinations should be carried out once in 6 months.

Bear in mind that Nexesta Fe does not protect against HIV infection (AIDS) and other sexually transmitted diseases.

Nexesta Fe does not affect the ability to drive vehicles and work with mechanisms.