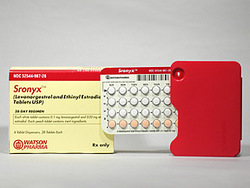 Sronyx (ethinyl estradiol/levonorgestrel) is an oral hormonal contraceptive which is used to prevent pregnancy.

The drug suppresses ovulation, increases the viscosity of the secretion of the cervix, which makes it difficult for sperm to penetrate the uterine cavity, and changes in the endometrium that prevent the implantation of a fertilized egg.

The drug is taken orally, without chewing, with a small amount of liquid.

Start taking tablets on the first day of your menstruation. Take 1 tablet per day for 28 days, preferably at the same time of day. During the intake of inert tablets, menstrual bleeding occurs. Begin the next package without interruption. It is important to comply with the order of taking tablets indicated on the blister. With good tolerability, the drug is taken as long as there is a need for contraception.

All the side effects that occurred in 2% or more women taking Sronyx contraceptive are listed below:

Absolute contraindications for Sronyx include:

If any of the above diseases or conditions develop against the background of taking Sronyx birth control pills, they should be immediately canceled.

Sronyx is contraindicated in pregnancy and lactation (breastfeeding).

Take the missed tablet within the next 12 hours. If the interval between doses exceeds 36 hours, contraception is unreliable. In such cases, to prevent possible intermenstrual bleeding, continue taking tablets from the already started package, with the exception of the missed tablet(s).

If you missed pills, it is recommended to use an additional, non-hormonal method of contraception (for example, a condom).

This rule does not apply to the last 7 tablets in the package since they do not contain hormones.

Before taking birth control pills, it is necessary to exclude pregnancy, to conduct a general medical examination and gynecological examination. Such examinations should be carried out regularly, every 6 months.

The use of oral contraception is not allowed until the liver functions are completely normalized.

Sharp pains in the upper abdominal areas, hepatomegaly and signs of intra-abdominal hemorrhage may indicate a liver tumor. In this case, discontinue using the contraceptive.

If you have vomiting or diarrhea, continue taking the drug and use an additional, non-hormonal contraceptive method.

Stop using the tablets at least 3 months before the planned pregnancy.

Sronyx should be discontinued in the following cases: