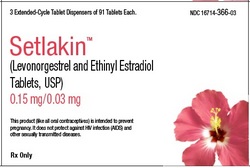 Setlakin is an extended-cycle contraceptive which contains females hormщnes, known as ethinyl estradiol and levonorgestrel, that are used to prevent pregnancy.

Setlakin suppresses ovulation, increases the viscosity of the secretion of the cervix, which makes it difficult for spermatozoa to penetrate into the uterine cavity, and changes the endometrium that prevents the implantation of a fertilized egg.

The drug provides a prolonged protection against unplanned pregnancy since it has no regular “hormone-free” periods. The drug also improves well-being due to a reduction in the number of menstruations and symptoms associated with menstrual periods (PMS, headache, etc.).

Each Setlakin pack contains 84 active tablets (ethinyl estradiol + levonorgestrel) and 7 inert tablets (no hormones). Take 1 tablet per day for 91 days at the same time and in the order indicated on the package (blister).

To achieve the most reliable contraceptive effect, the drug should be taken in accordance with the recommendations and at intervals not exceeding 24 hours.

Tablets should be taken with a small amount of liquid.

Setlakin tablets can cause the following side effects:

Do not use Setlakin for birth control if you have any of the conditions listed below:

Before applying the medication, we recommend that you consult a doctor.

The contraceptive effect of Setlakin tablets can be reduced by antibiotics (ampicillin, rifampicin, chloramphenicol, neomycin, polymyxin B, sulfonamides, tetracyclines).

When taking oral hormonal contraceptives, you may need to adjust the dosage regimen for hypoglycemic drugs and indirect anticoagulants.

Some drugs may decrease the effectiveness of Setlakin:

Setlakin is contraindicated in pregnancy and during breastfeeding.

If pregnancy is detected during the ruse of the contraceptive, the drug should be immediately discontinued. Extensive epidemiological studies have not revealed an increased risk of congenital malformations in children whose mothers received birth control pills prior to pregnancy or teratogenic effects with the occasional use of birth control pills in early pregnancy.

The contraceptive can reduce the amount of breast milk and change its composition, so its use is contraindicated until the termination of breastfeeding. A small number of active substances, ethinyl estradiol and levonorgestrel, can penetrate into breast milk and influence the child.

The risk of pregnancy increases.

If a woman did not have withdrawal bleeding during the 13th week, the possibility of pregnancy should be excluded before starting a new 91-day course of Setlakin.

If you have serious gastrointestinal disturbances (vomiting or diarrhea in the period up to 3-4 hours after taking birth control pills), the absorption of the drug may be incomplete and additional contraceptive methods may be required. In these cases, you should follow the above recommendations for missed tablets.

If you have cardiovascular diseases, you should consult a doctor before taking this drug.

You should stop taking the medication and consult a doctor if you have symptoms of venous or arterial thrombosis: unilateral pain in the lower limb and / or swelling: sudden severe chest pain; sudden shortness of breath; sudden coughing attacks; unusual headache, sudden partial or complete loss of vision; slurred speech or aphasia; dizziness; fainting; weakness or very significant loss of sensitivity on one side or in one part of the body; motor disorders; “sharp” abdomen.

The risk of thrombosis and thromboembolism increases: with age, in smokers (the risk is especially high in smoking women over 35 years of age).

There are reports of a slight increase in the risk of developing cervical cancer with prolonged use of birth control pills. However, this connection has not been proven.

Women with hypertriglyceridemia have an increased risk of developing pancreatitis during treatment with oral contraceptives.

The effectiveness of the drug can be reduced by missing tablets, vomiting and diarrhea, or as a result of some drug interactions.

A woman should be informed that Setlakin does not protect against HIV infection (acquired immunodeficiency syndrome – AIDS) and other sexually transmitted diseases.

When taking birth control pills, irregular (acyclic) bleeding (spotting or breakthrough bleeding) can occur, especially during the first 3 months. Therefore, any irregular bleeding should be assessed only after an adaptation period which lasts approximately 3 cycles. If the bleeding is permanent or lasts too long, a woman should consult a doctor.

If a woman did not have a menstrual bleeding during the 13th week (when taking 7 inert tablets), the possibility of pregnancy should be excluded.

A woman should stop taking tablets and immediately consult a doctor if she has signs of thrombosis, myocardial infarction or stroke.

Setlakin does not affect the ability to drive vehicles and operate mechanisms.