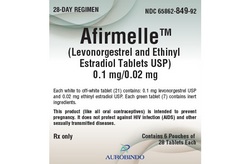 Afirmelle is an oral contraceptive which contains 2 female hormones, ethinyl estradiol and levonorgestrel, that are used to prevent pregnancy.

Ethinyl estradiol and levonorgestrel block the release of the hypothalamus, suppressing the secretion of the gonadotrophic hormones by the pituitary gland, which leads to inhibition of maturation and release of the ovum ready for fertilization. Ethinyl estradiol helps maintain a high viscosity of the cervical mucus, which makes it difficult for sperm to penetrate into the uterine cavity.

In addition to the contraceptive effect, the drug normalizes menstrual periods.

Take tablets following the directions and marks indicated on the back of the blister.

Take tablets at the same time of the day, from the first day of your menstruation, 1 tablet a day, for 28 days in a row, without interruption. Begin a new Afirmelle pack once you have taken the last tablet from the previous pack.

In some cases, Afirmelle can cause the following side effects:

Afirmelle for birth control is contraindicated in the following cases:

The drug is contraindicated for use during pregnancy and lactation period (breastfeeding).

If you missed an active tablet, take it within the next 12 hours. If the interval exceeds 36 hours, a contraceptive effect is not guaranteed. You should continue taking birth control pills in order to prevent premature menstruation associated with discontinuation of Afirmelle). During this period, you need to use other non-hormonal contraceptive methods. If you missed an inert tablet, discard it and continue taking the drug according to your usual scheme.

The use of the drug is allowed no earlier than 6 months after the former viral hepatitis provided that your hepatic functions are normalized.

If you feel a sharp pain in the upper abdominal areas, hepatomegaly or signs of intra-abdominal hemorrhage, you need to exclude a liver tumor. In this case, you should stop taking the drug.

If you have acyclic bleeding, you may continue taking birth control pills after excluding organic pathology.

If you have violations of the liver during the use of the contraceptive, you should consult a doctor.

Vomiting or diarrhea can reduce a contraceptive effect of the drug, so if you have these symptoms, take an additional pill. If these symptoms persist for a longer time, you should use additional methods of preventing pregnancy.

If you plan a pregnancy, the contraceptive should be discontinued at least 3 months before the planned pregnancy.

Under the influence of oral contraceptives with ethinyl estradiol, some laboratory parameters (functional parameters of the liver, kidneys, adrenals, thyroid gland, blood coagulation factors and fibrinolytic factors, levels of lipoproteins and transport proteins) can vary.

Afirmelle should be discontinued immediately in the following cases:

The drug does not affect the ability to drive a vehicle and work with mechanisms.