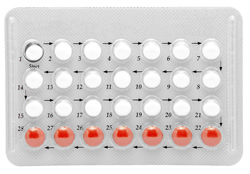 Ethinyl Estradiol/Folic Acid/Levonorgestrel is an oral contraceptive which is taken daily to prevent pregnancy.

The contraceptive effect of this drug is based on the interaction of various mechanisms, including the suppression of ovulation and changes in the endometrium and cervical mucus.

Tablets should be taken in the order indicated on the blister pack, every day at about the same time.

Take one tablet daily for 28 consecutive days. Each subsequent pack should be started without interruption. Withdrawal bleeding usually starts 2-3 days after taking the last inert pill and may not end when you start taking pills from the next pack.

If you take the drug for the first time:

Start taking tablets on the first day of your menstruation. You may also start taking pills on day 2–5 of your period, but in this case it is recommended to use additional non-hormonal methods of contraception for the first 7 days (the first cycle of the drug).

If you have previously used another combination hormonal contraceptive (COC, vaginal ring or transdermal patch):

If you have previously used contraceptives containing only gestogen (mini-pills, injections, implant):

You can switch from birth control pills on any day, from injections – on the day when the next injection is due, from the implant – on the day it is removed.

Tablets can be taken immediately. Additional contraceptive measures are not required.

Use after childbirth and after abortion in the second trimester of pregnancy:

The pack can be started 21-28 days after childbirth or abortion in the second trimester. If use is started later, it is necessary to use an additional back-up method of contraception during the first 7 days of taking pills.

Use in gastrointestinal disorders:

If vomiting or severe diarrhea occurs within 3–4 hours after taking the pill, the pill may not be completely absorbed. In this case, you must re-take tablet Leverett mini.

If you want your menstrual cycle to begin on another day of the week, the duration of the interruption in hormones can be shortened as needed. However, the shorter the interval, the higher the likelihood of spotting during the use of the second pack.

Do not use Ethinyl Estradiol/Folic Acid/Levonorgestrel if you have any of the following conditions:

Medicines that may affect the effects of COC:

In order to identify potential drug interactions, you should always study the information on the use of any concomitant drugs!

Drug interactions that lead to increased clearance of sex hormones can cause breakthrough bleeding and ineffective contraceptive protection. This effect has been detected in hydantoins (for example, phenytoin), barbiturates, primidone, carbamazepine and rifampicin. There are also suggestions regarding oxcarbazepine, topiramate, felbamate, griseofulvin, ritonavir, nevirapine, and preparations containing St. John’s wort. The mechanism of their action is probably based on the ability of these substances to increase the activity of “liver” enzymes. The maximum induction of enzymes, as a rule, is observed not earlier than 2-3 weeks after the start of use of these drugs but can persist for at least 4 weeks after their cancellation. Cases of the ineffectiveness of contraceptives have also been detected with the simultaneous use of antibiotics (for example, ampicillin tetracycline).

In the case of short-term use of any of these drugs, causing an increase in the activity of “liver” enzymes, it is recommended to use additional barrier methods of contraception from the moment you start taking these drugs, during the entire period of treatment and for 4 weeks after their withdrawal. Women who take these short-course antibiotics should temporarily use back-up methods of contraception during the concomitant use and for 7 days after discontinuation. If the next pack of the contraceptive is finished earlier than the period that requires the use of additional contraceptives, you should start taking active tablets from the next package without using placebo tablets.

In the case of long-term use of these drugs, women are recommended to use other contraceptives.

Effects of COC on other drugs:

Sex steroid hormones can increase plasma concentrations of cyclosporine, diazepam (and some other benzodiazepines), theophylline, glucocorticoids, which can lead to the development of toxic effects. Plasma concentration of clofibrate, paracetamol, morphine, lorazepam (and some other benzodiazepines) is reduced. Simultaneous intake of lamotrigine and COC can lead to a decrease in the plasma concentration of lamotrigine and impairment of the control of convulsive seizures in women who have started using COC.

The need for insulin or oral hypoglycemic drugs can be altered by affecting glucose tolerance.

Trolandomitsin may increase the risk of cholestasis when used together with COC.

Birth control pills are not used during pregnancy. There is little data about how COCs can affect the fetus.

Do not use this drug if you are breastfeeding since sex hormones can change breast milk production and composition. There is little data about how COCs can affect the baby.

If the delay between doses exceeds 12 hours, birth control will be reduced. In this case, the following rules should apply:

Based on this, the following guidelines should be followed:

You miss a tablet on Week 1:

You need to take the missed pill as soon as possible, as soon as you remember (even if it means taking two pills at the same time). The next pill is taken at the usual time. Additionally, you should use a back-up method of contraception (for example, a condom) during the next 7 days. If you had sexual intercourse within a week before the pill was missed, the likelihood of pregnancy must be considered. The more pills are missed and the closer they are to the phase of inert tablets, the greater the likelihood of pregnancy.

You miss a tablet on Week 2:

You need to take the missed pill as soon as possible, as soon as you remember (even if it means taking two pills at the same time). The next pill is taken at the usual time. If the pills were taken correctly within the 7 days preceding the missed pill, there is no need for additional contraceptive measures. Otherwise, as well as when missing two or more pills, you must additionally use back-up methods of contraception (for example, a condom) during the next 7 days.

You miss a tablet on Week 3:

The risk of reducing the contraceptive reliability is inevitable due to the upcoming break in taking active pills. You must strictly adhere to one of the following two options. Moreover, if all pills were taken correctly within the 7 days preceding the first missed pill, there is no need to use additional contraceptive methods.

If you have no withdrawal bleeding after missing active pills, you must exclude pregnancy.

If you miss any of the inert tablets, discard them and keep taking 1 tablet per day until you finish the pack. Additional birth control is not required.

Before taking Ethinyl Estradiol/Folic Acid/Levonorgestrel, it is necessary to conduct a full medical examination, exclude pregnancy and malignant neoplasms. With prolonged use, catch-up examinations should be carried out at least 1 time per year.

If you have risk factors, the potential risk and expected benefits of hormonal contraception should be carefully evaluated before taking the drug.

The risk of thrombosis and thromboembolism during pregnancy is higher than when taking low-dose COC.

The use of any COC increases the risk of developing VTE in female patients, compared with women who do not use them.

Preparations containing levonorgestrel have the lowest risk of developing VTE.

Venous thromboembolism can be fatal in 1-2% of cases.

Symptoms of venous thrombosis: unilateral swelling in the leg, pain or discomfort in the leg only in the upright position or when walking, a temperature increase in the affected limb, redness or discoloration of the skin on the leg.

Symptoms of pulmonary embolism: sudden onset of unexplained dyspnea or rapid breathing, sudden attack of cough, which may be accompanied by hemoptysis, acute chest pain, which may increase with deep breathing, severe dizziness, rapid or irregular heartbeat. Some of these symptoms (coughing and shortness of breath) are nonspecific and therefore may be mistakenly interpreted as signs of more frequent and less severe disorders (respiratory tract infections).

Other signs of vascular occlusion may include sudden pain, swelling, and blue limb.

Sometimes a sudden loss of vision can occur.

Cerebrovascular disorders: sudden weakness or numbness of the face, upper and lower extremities, especially on one side of the body, sudden gait disturbance, dizziness, loss of balance or coordination of movements, sudden confusion, speech or difficulty in perception, sudden deterioration of one or both eyes, sudden severe or prolonged headache for no apparent reason, loss of consciousness. Other signs of vascular occlusion: sudden pain, swelling or weak cyanosis of the extremities, symptoms of an acute abdomen.

Symptoms of myocardial infarction: pain, discomfort, pressure, heaviness, a feeling of compression or distension in the chest, arm or behind the sternum, discomfort with irradiation in the back, cheekbones, larynx, arm, stomach, fullness and distention in the stomach, feeling of suffocation sweating, nausea, vomiting, dizziness, severe weakness, anxiety, shortness of breath, rapid or irregular heartbeat.

Women taking combination oral contraceptives should consult a doctor immediately if they have signs of thrombosis.

There are reports of some increase in the risk of cervical cancer with long-term use of COCs, but there is conflicting evidence on the extent to which this may be due to other factors, including sexual behavior, the use of back-up methods of contraception and the human papillomavirus (HPV).

In rare cases, COC may cause benign liver tumors and (in very rare cases) – malignant tumors.

There are reports of cases of increased blood pressure caused by COC, especially with prolonged use and in older women. Women with hypertension in history or in the presence of kidney disease should consider other methods of contraception.

In women with hereditary angioedema, exogenous estrogens can provoke or aggravate the symptoms of this disease.

Women with a tendency to chloasma, especially in the history of pregnancy, should avoid prolonged exposure to the sun and exposure to ultraviolet radiation.

Effect on the menstrual period

During the first months of use, irregular bleeding/spotting may occur. Therefore, the assessment of any irregular bleeding should be carried out only after a period of adaptation of approximately three cycles.

If irregular bleeding recurs or develops after previous regular cycles, a thorough examination should be performed to rule out malignant tumors or pregnancy.

Some women may not develop withdrawal bleeding when taking inert tablets. If the drug was taken as directed, it is unlikely that the woman is pregnant. However, if COC has been taken irregularly or if a woman misses two withdrawal bleedings in a row, pregnancy should be excluded.

After discontinuing COCs, it may take some time before a normal cycle is established. Some women may have amenorrhea or oligomenorrhea (possibly with anovulation), if menstrual irregularities have occurred before.

The effectiveness of COCs can be reduced by missing pills, vomiting and diarrhea or as a result of drug interactions.

The drug contains lactose. Patients with rare hereditary disorders, such as galactose intolerance, deficiency of the enzyme Lapp-lactase, glucose-galactose malabsorption, who are on a lactose-free diet, should take into account the amount of lactose in the preparation.

The drug does not affect or has an insignificant effect on the ability to drive vehicles and work with potentially dangerous machinery.