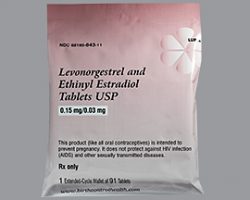 The contraceptive effect of combined oral contraceptive is based on the interaction of various factors. The most important of them is depressed ovulation. и изменения в эндометрии.

Each pack contains 21 active pills with medication and 7 placebo pills with no medication. Start taking tablets on the first day of menstrual bleeding. They should be taken in a row, every day at the same time. The contraceptive effect will come at once, and no additional contraceptive means are needed. After the 21st day, immediately proceed to placebo tablets. Bleeding usually begins on the 2-3 day of taking inert tablets. After a 28-day course, begin start taking pills from a new package.

For your convenience, the blister has the days of the week so you can take the drug according to the “calendar”. This way you will not get confused and will not miss the dose.

There were no reports of serious side effects due to an overdose of ethinyl estradiol and levonorgestrel. Based on the general experience of using combined oral contraceptives, the following overdose symptoms may appear: nausea, vomiting, mild vaginal bleeding. There are no antidotes, the treatment should be symptomatic.

Do not take Ethinyl Estradiol and Levonorgestrel contraceptive if you have any of the following contraindications (present of in the anamnesis):

The most common side effects caused by Ethinyl Estradiol and Levonorgestrel pills is a headache.

You can also experience the following adverse reactions:

The influence of other drugs on Estradiol and Levonorgestrel

In order to identify potential drug interactions, study the information on the use of any concomitant medications.

The interaction between oral contraceptives and other drugs can cause acyclic menstrual bleeding and/or inefficiency of contraception.

The contraceptive may interact with drugs that are inducers of hepatic enzymes (such as phenytoin, barbiturates, primidone, carbamazepine, rifampicin, bosentan, and HIV-medications like ritonavir, nelfinavir, and possibly oxcarbazepine, topiramate, felbamate, griseofulvin and preparations of plant origin on the basis of St. John’s wort). Induction of hepatic enzymes can enhance the clearance of sex hormones. The maximum induction of enzymes is usually achieved after 10 days and then can persist for at least 4 weeks after discontinuation of drug therapy.

When used with certain antibiotics (for example, penicillins, tetracyclines), the intestinal hepatic circulation of estrogens may decrease, with a subsequent decrease in the serum concentration of ethinylestradiol.

Troleandomycin with a concomitant administration with Estradiol and Levonorgestrel may increase the risk of intrahepatic cholestasis.

In the course of short-term therapy with any of the medicines or active substances mentioned above (except for rifampicin), you need to use the barrier method of contraception during treatment with the drug and for 7 days after its withdrawal.

If a woman receives rifampicin, the barrier method of contraception in addition to taking birth control pills should be used throughout the treatment period with rifampicin and for 28 days after it is discontinued.

Women who receive long-term treatment with drugs whose active substances are inducers of hepatic enzymes should use another reliable method of non-hormonal contraception.

Effect of Estradiol and Levonorgestrel on other drugs

Oral contraceptives may affect the metabolism of some other active substances. Accordingly, their plasma and tissue concentrations may increase (for example, when used with cyclosporine) or decrease (when used with lamotrigine).

The use of contraceptive steroids may influence the results of some laboratory tests, including biochemical parameters of the liver, thyroid, adrenal and kidney functions, the plasma level of proteins, for example, globulins binding corticosteroids and lipid/lipoprotein fractions, parameters carbohydrate metabolism, as well as the parameters of coagulation and fibrinolysis. Usually, the changes in laboratory indicators do not go beyond the limits of normal values.

If you missed a pill of Ethinyl Estradiol and Levonorgestrel, you need to know the details in order to understand what to do next: what tablet was missed, during which week of the period it was missed, and so on.

Important: If you think you are pregnant, stop taking birth control pills. If you do not have your menstruation within 14 days, you should take a pregnancy test and contact a gynecologist.

The risk of arterial thromboembolism or cerebrovascular accidents with the use of Ethinyl Estradiol / Levonorgestrel is increased by the following risk factors:

The presence of one major risk factor for venous disease or multiple risk factors for artery disease can also be a contraindication. Also, the possibility of anticoagulant therapy should be taken into account.

Some epidemiological studies indicate an increased risk of developing cervical cancer with prolonged use of COCs, but it remains unclear to what extent these behaviors have been affected by the nature of sexual behavior and other distorting factors, such as the presence of human papillomavirus (HPV) infection.

In rare cases, against the background of using Ethinyl Estradiol and Levonorgestrel, there was a development of benign, and in very rare cases, malignant liver tumors. In some cases, these tumors caused life-threatening intraabdominal bleeding.

Women with hypertriglyceridemia or an inherited predisposition to it have an increased risk of pancreatitis.

Despite the fact that many women taking this preparation had a slight increase in blood pressure, a clinically significant increase was rare. Immediate cancellation of the drug is justified only in these rare cases.

Acute or chronic liver disease may require cancellation of the contraceptive prior to the normalization of liver function.

Patients with diabetes require careful monitoring, especially in the early stages of COC use.

Women who are prone to focal hyperpigmentation should avoid sun exposure or exposure to ultraviolet radiation during COC administration.

The tablet contains lactose. Patients with congenital galactose intolerance, lactose or glucose-galactose malabsorption should not take this drug.

Before taking or the drug, you need to exclude pregnancy. It is necessary to measure blood pressure and perform a physical examination taking into account contraindications and special instructions. Periodicity and nature of the examination should be based on existing practical recommendations, taking into account the individual characteristics of the patient.

Remember that oral contraceptives do not protect against the infection of HIV (AIDS) and other sexually transmitted diseases.

The effectiveness of the contraceptive may be reduced, for example, if active pills are missed, gastrointestinal disorders occur when taking active pills or when other medications are used concomitantly.

Use of Ethinyl Estradiol / Levonorgestrel may cause acyclic spotting bleeding or menstrual bleeding may occur, especially in the first months of use. Th adaptation period lasts approximately three months.

If acyclic bleeding persists or occurs after three months, the probability of non-hormonal pathology should be considered. A woman should undergo a survey to exclude pregnancy or cancer, which may include curettage of the uterine cavity.

If the pregnancy occurred during the period of using the contraceptive, the drug should be canceled immediately. The results of extensive epidemiological studies indicated that the risk of birth defects in children whose mothers used COC prior to pregnancy did not increase.

The pills can affect lactation, reducing the amount and changing the composition of breast milk. Thus, in general, the use of COC by a nursing mother is not recommended.

The ability to drive a vehicle or operate potentially dangerous mechanisms

The contraceptive has no effect on the ability to drive and control machinery.