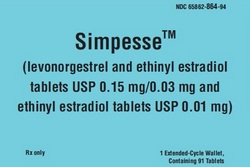 Simpesse is an extended-cycle contraceptive which contains ethinyl estradiol and levonorgestrel, that are used to prevent pregnancy.

The active substances in the composition of Simpesse suppress ovulation and change the viscosity of the secretion of the cervix, as a result of which it becomes impenetrable for spermatozoa.

Each pack contains 84 active tablets (with hormones) and 7 inert tablets (without hormones). Take 1 tablet daily, at the same time of a day and in the order indicated on the blister. Continue taking the drug for 91 days in a row.

Important: the contraceptive should be taken at intervals not exceeding 24 hours.

Begin a new package without interruption. The scheme of admission will be the same.

Simpesse tablets can cause the following side effects:

These phenomena are temporary and do not require any treatment).

With long-term use, the contraceptive can cause:

These reactions occur very rarely and require a doctor’s consultation.

Do not use Simpesse for birth control if you have any of the following conditions:

Metronidazole and ascorbic acid may increase the systemic effects of hormonal contraceptive components.

The contraceptive can weaken the effect of anticoagulants, hypotensive and hypoglycemic drugs, lorazepam and tazepam, tricyclic antidepressants, thyroxine, clofibrate.

Simpesse is contraindicated during pregnancy and lactation. If pregnancy is revealed during the use of birth control pills, they should be immediately discontinued.

If you missed an inert tablet (day 85-91), discard it. The contraceptive effect remains reliable.

Before using birth control pills, it’s recommended to undergo general medical and gynecological examination to exclude the presence of contraindications and pregnancy.

Women who have had a family history of bleeding disorders or thromboembolic disease at a young age should not use Simpesse.

AS long as you use the drug, you need to visit a gynecologist at least every 6 months.

The use of the medication is allowed no earlier than 6 months after the previous viral hepatitis (when the hepatic functions become normal).

If you need no menstrual bleeding after withdrawal of the drug, continued use is not allowed until you exclude pregnancy.

If you had vomiting or diarrhea within 1-4 hours after taking the drug, it is recommended to use an additional method of contraception (for example, a condom).

Women taking birth control pills have an increased risk of developing thromboembolism. This risk increases with age, mainly among women who smoke. Therefore, women over 35 who take Simpesse are not recommended to smoke.

If you plan a pregnancy, it is recommended to stop taking the contraceptive 3 months before the planned time of conception.

Stop using the drug immediately if you notice the following reactions: