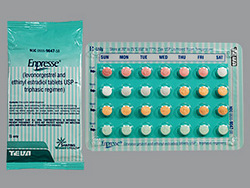 Enpresse is a hormonal contraceptive containing a combination of 2 hormones, levonorgestrel and ethinyl estradiol, that are used to prevent ovulation.

Enpresse is used as a contraceptive agent. Also, it’s used to eliminate a number of gynecological symptoms associated with the period, such as premenstrual tension, dysmenorrhea (menstrual disorder), polymenorrhea (a menstrual disorder characterized by prolonged and abundant menstruation, pain in the middle of the period, etc.)

The drug has an estrogen-progestin contraceptive effect. Levonorgestrel in combination with ethinyl estradiol inhibits ovulation, increases the viscosity of mucus in the cervix, making it difficult for sperm to enter the uterine cavity. With regular use, the preparation normalizes the menstrual period and helps prevent a number of gynecological diseases.

Each pack of Enpresse contains:

Take Enpresse daily at the same time of a day (preferably after breakfast or dinner), 1 tablet for 28 days, starting from the first day of the period (1 day of menstrual bleeding). Menstrual-like bleeding occurs when taking 7 inert tablets.

Start a new pack regardless of whether the vaginal bleeding has ended or is just beginning.

Taking the pills from each package starts on the same day of the week.

After the withdrawal of the drug, the functions of the sex glands are quickly restored, which ensures the ability to conceive.

Usually, after cessation of treatment, the first menstrual cycle is extended by 1 week. If the normal cycle is not restored within 2-3 months, it is necessary to consult a doctor.

If you used contraceptives containing only progestogen (“mini-pills”), you can switch to Enpresse on any day (without a break).

After termination of pregnancy in the first trimester, a woman can start taking the drug immediately and does not need additional contraceptive measures.

After childbirth or termination of pregnancy in the II trimester, the drug should be started no later than the 21st – 28th day. Additionally, you need to use a barrier method of contraception during the first 7 days.

In any case, before taking birth control pills, pregnancy should be excluded.

There is no specific antidote; symptomatic treatment is required.

Do not use Enpresse if you have any of the conditions listed below:

The relative risk of thrombosis increases with smoking over the age of 35; with prolonged immobilization, extensive injury; in impaired peripheral circulation; Crohn’s disease and ulcerative colitis, phlebitis of the superficial veins.

Barbiturates, some antiepileptic drugs (carbamazepine, phenytoin) can increase the metabolism of steroid hormones that make up the contraceptive.

A decrease in the effective concentration is observed with the simultaneous administration of certain antibiotics (ampicillin, rifampicin, tetracycline, griseofulvin) due to changes in the microflora in the intestine. Nonsteroidal anti-inflammatory drugs reduce the effectiveness of the drug.

The drug is contraindicated for use during pregnancy and lactation. If it’s necessary to use the drug during lactation, breastfeeding should be terminated. Levonorgestrel and ethinyl estradiol are excreted in breast milk in small quantities

If you miss a pill of Enpresse, the risk of pregnancy will be increased.

Before taking the tablets and every 6 months a woman should undergo a thorough general medical and gynecological examination, exclude pregnancy and coagulation disorders.

In cases of intermenstrual bloody discharge in the first few months of taking the drug, the course should not be interrupted, since mild bleeding disappears after the body adapts to the drug. With the recurrence of such secretions, an increase in their intensity, unusually strong and heavy menstrual-like bleeding, consultation with a physician is necessary. A consultation is also required if you have no menstrual-like reaction during the 7 no-hormone days.

When using the contraceptive, bear in mind hormonal birth control pills can change the usual course of the menstrual period, rectal temperature and properties of cervical mucus.

With vomiting/diarrhea within 3-4 hours after taking the active tablet, its contraceptive effect of Enpresse may decrease. In this case, you should NOT stop taking the drug but should use additional non-hormonal methods of contraception.

The drug is discontinued 6 weeks before the planned surgical intervention/long-term immobilization and resumed 2 weeks after the end of immobilization.

If you suspect a pregnancy, stop taking the tablets and visit a doctor.

Smoking women taking combination oral contraceptives have an increased risk of developing vascular diseases with serious consequences. The risk increases with age and with the number of cigarettes smoked per day (especially in women over the age of 35). The risk of thrombosis increases with high blood pressure.

Patients with chloasma should avoid exposure to the sun when using the contraceptive.