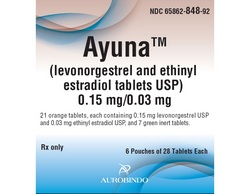 The contraceptive effect of Ayuna drug is based on the interaction of various mechanisms by inhibiting gonadotropin, oppressing ovulation, other effects include changes in mucus secreted by the cervix (which complicates penetration of the sperm into the uterus) and endometrium (which reduces the likelihood of implantation). With correct and constant use, the probability of pregnancy is 0.1% per year.

Tablets should be taken orally in the order given on the package, every day at about the same time, with water. Take one pill a day for 28 days in a row. Begin the next package without breaks. Cancellation bleeding usually occurs when you take inactive tablets (22-28). Bleeding, as a rule, begins on day 2-3 after the last tablet has been taken.

How to start taking Ayuna tablets?

If you did not take any hormonal contraceptives in the previous month:

Switching from other combined oral contraceptives:

Start taking Ayuna pills the day after the last active tablet was taken from the previous pack.

Switching from only-gestagen contraceptives (“mini-pills”, injections, implants) or with the progestogen-releasing IUDs:

After an abortion in the first trimester of pregnancy:

You can start taking birth control pills immediately. If this case, you do not need additional contraceptive methods.

After delivery or abortion in the second trimester of pregnancy:

Start taking the drug on the day 21-28 after delivery or abortion in the second trimester of pregnancy. If you start talking tablets later, it is necessary to use an additional barrier method of contraception during the first 7 days. However, you need to exclude pregnancy or wait for the first menstruation before taking Ayuna for birth control.

Symptoms that may occur in an overdose: nausea, vomiting, spotting or metrorrhagia.

There is no specific antidote for ethinyl estradiol and levonorgestrel, symptomatic treatment is required.

Ayuna pills can cause the following side effects:

Do not use Ayuna for birth control in the presence of any of the following contraindications:

Effects of other drugs on Ayuna:

The reduced concentration of ethinyl estradiol in the blood can lead to an increased incidence of breakthrough bleeding and a decrease in the effectiveness of the drug.

Sometimes you need to use additional non-hormonal birth control methods for several weeks, depending on the substance, its dose, duration of administration and the rate of withdrawal from the body.

The following substances can reduce the concentration of ethinyl estradiol in serum:

Ethinyl estradiol may affect the exchange of other medicinal substances-inhibitors of microsomal liver enzymes or substances that induce conjugation of the drug in the liver, in particular, glucuronation. Accordingly, their concentration in plasma and tissues may increase (cyclosporine, theophylline, corticosteroids).

Hypericum perforatum, herbal remedies containing Hypericum perforated, should not be combined with Ayuna, as their interaction can reduce the contraceptive effect. In connection with this, cases of unexpected breakthrough bleeding and unwanted pregnancy were reported.

Some antibiotics can also reduce the contraceptive effect of the drug (ampicillin and other penicillins, tetracycline), but there is not data of the mechanism of action.

The following substances can increase the concentration of ethinyl estradiol in serum:

Trolandomine may increase the risk of intrahepatic cholestasis when combined with tablets containing ethinyl estradiol and levonorgestrel.

Effects of Ayuna on other drugs

Patients who combine flunarizine with oral contraceptives have an increased risk of galactorrhea.

There is evidence that ritonavir reduces the concentration of ethinyl estradiol in serum.

To identify the potential interaction between medications, it is necessary to consult a doctor or at least study the leaflets of the drugs.

Ayuna is not used in the period of pregnancy and breastfeeding.

If the pregnancy is detected during the use of birth control pills, they should be immediately withdrawn.

Taking ethinyl estradiol and levonorgestrel tablets can reduce the amount of breast milk and change its composition, therefore, the drug is contraindicated during lactation. A small amount of the active ingredients can be excreted in milk but there is no proof of their negative impact on the health of the baby.

The following instructions apply to cases of missing active tablets of Ayuna (1-21 pills). If you missed an inert pill (22-28), throw it away since it contains no medication.

If the delay in taking an active pill does not exceed 12 hours, the contraceptive effect remains reliable. Take the missed pills as soon as you remember about your mistake. Nex pills are taken according to the usual scheme.

If the delay in taking an active pill exceeds 12 hours, the contraceptive effect cannot be considered reliable. In this case, following the given instructions:

You missed an active pill during the week 1:

Take the missed pills as soon as you remember about your mistake (this may mean taking two pills per day). Take the next pills according to the usual scheme. In addition, you need to use a barrier birth control method (condoms) for the next 7 days. If you had sexual intercourse a week before missing a pill, you may be already pregnant.

You missed an active pill during the week 2:

Take the missed pills as soon as you remember about your mistake (this may mean taking two pills per day). Take the next pills according to the usual scheme.

You missed an active pill during the week 3:

The risk of a decreased contraceptive effect is inevitable due to the upcoming phase of taking inert tablets.

You should strictly follow one of the given options. If you took the previous 7 pills according to the usual scheme and without mistakes, you do not need to use barrier birth control methods.

If you missed taking the pills and do not have the expected bleeding cancellation in the phase of taking inert tablets, you need to exclude pregnancy.

Before using the drug, it is recommended to undergo a thorough general medical and gynecological examination and exclude pregnancy. In addition, you need to exclude violations of the blood coagulation system. In the case of long-term oral contraception, it is necessary to visit a gynecologist every 6 months.
If you have vomiting or diarrhea within up to 4 hours after taking birth control pills (containing ethinyl estradiol and levonorgestrel), it’s recommended to use additional contraceptive methods. In these cases, you should read the recommendations when massing a pill.

If you want to delay menstruation, you should skip inactive tablets and continue taking active pills from the new Ayuna pack without interruption. Tablets from this new pack can be used for as long as you want. You may have spotting or breakthrough uterine bleeding.

If you want to change the day of your period on another day of the week, you can shorten the nearest phase of taking inert tablets. The shorter the interval, the higher the probability that you will not have withdrawal bleeding this period.

If you are planning a surgery, it is recommended to stop taking birth control pills at least 4 weeks before the procedure and resume taking them 14 days after the surgery.

You should stop taking the contraceptive and consult a doctor if you have symptoms of venous or arterial thrombosis or cerebrovascular disorders. The risk of thrombosis and thromboembolism increases:

Women in the postpartum period have an increased risk of thromboembolism.

The increase in the frequency and severity of a migraine during the use of Ayuna may be the basis for the immediate discontinuation of birth control pills.

There are reports of an increased risk of developing cervical cancer with long-term use of tablets containing ethinyl estradiol and levonorgestrel. Its link with combined oral contraceptives has not been proven.

Women with hypertriglyceridemia or predisposition to it may have an increased risk of developing pancreatitis.

There is a slightly increased relative risk of developing breast cancer diagnosed in women who used birth control pills. Its link with the use of combined oral contraceptives has not been proven.

Acute or chronic liver dysfunction may require the withdrawal of the drug until the liver function becomes normal. Recurrent cholestatic jaundice requires discontinuation of the drug as well.

Combination oral contraceptives may affect insulin resistance and glucose tolerance. Women with diabetes should be carefully monitored during the use of Ayuna.

Women with a tendency to chloasma should avoid prolonged exposure to the sun and ultraviolet radiation when using oral contraceptives.

Drugs on the basis of ethinyl estradiol and levonorgestrel may affect the results of some laboratory tests. Changes usually remain within the limits of normal values.

Some women may not have withdrawal bleeding in the phase of taking inert tablets. If pills are taken as recommended, the risk of pregnancy is minimal. However, if you had mistakes in taking pills or you do not have 2 bleeding cancellations in a row, pregnancy should be excluded.

Ayuna does not protect against HIV infection and other sexually transmitted diseases!

The medication does not affect the ability to drive vehicles and work with machinery.