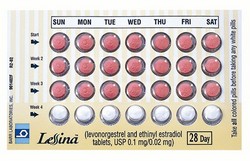 Lessina is a monophasic microdose birth control drug. It contains levonorgestrel and ethinyl estradiol that affects the ovulation in the best way preventing the unwanted pregnancy.

Lessina is prescribed as an oral contraception.

Lessina is a microdose monophasic birth control with levonorgestrel and ethinylestradiol. The main effect of this birth control preparation is an inhibition of ovulation and a change in the viscosity of the cervical secretion. Finally, spermatozoa entering the uterine cavity is hindered. The application of hormonal birth control results in more regular and painless menstruation.

Lessina is applied within 28 days without any breaks. The first 21 pills contain ethinylestradiol and levonorgestrel. The latest 7 pills are placebo containing no hormone. The pill should be taken at one and the same time washed down with a little water. The menstruation will start when taking the second or third placebo pill.

Smoking in combination with taking combined birth control drugs magnifies the risk of serious cardiovascular negative circumstances. This risk is increased with the age and is dependent on the number of cigarettes smoked per day. In the case of the increased consumption (according to the results of epidemiological studies, smoking of 15 or more cigarettes a day is associated with a significant increase in risk) and is especially high in women over 35 years of age. Women taking combined oral contraceptives are strongly recommended to quit smoking. For smokers over 35, other contraceptive methods should be offered.

Among women using birth control drugs containing various combinations of hormones, the incidence of breast cancer has been slightly increased. Due to the fact that breast cancer in women under the age of 40 is rare, an additional number of such cases are few in relation to the overall risk of breast cancer.

There are cases when a woman misses to take a pill. If the interval is less than 12 hours the pill should be taken immediately. The contraceptive effect is kept. There is no need to apply additional methods to protect yourself from unwanted pregnancy.

If the interval is greater than 12 hours you should take the pill at the time of this understanding. The contraceptive effect may be reduced, in this case. In this case, it is better to apply additional contraceptive methods.

Lessina is contraindicated in pregnancy and during breastfeeding. If pregnancy is diagnosed while taking this medication, then it should be immediately discontinued.

Taking combined oral contraceptives can reduce the amount of breast milk and change its composition, so, as a rule, their use is contraindicated during breastfeeding.