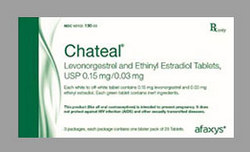 Chateal is a hormonal contraceptive which contains 2 female hormones, ethinyl estradiol and levonorgestrel, that are used to prevent pregnancy.

Chateal belongs to the group of combined medicines containing hormones secreted by the sex glands, intended for systemic use, with a contraceptive effect.

The use of this drug causes a contraceptive effect due to the fact that ethinyl estradiol and levonorgestrel have several mechanisms that interfere with the fertilization of the egg.

The contraceptive inhibits the process of ovulation and thickens mucus secreted in the cervical canal of the cervix.

Each Chateal pack contains 21active tablets and 7 inert tablets. Inert tablets are designed to ensure continuity of the drug. They contain no hormones.

Chateal tablets can cause the following side effects:

Chateal contraceptive is not used in women with the following conditions:

Interactions between Chateal and other medications can lead to serious bleeding and/or inefficiency of the oral contraceptive.

The drug is not used in pregnant women.

If there is a need to take Chateal for birth control, lactation (breastfeeding) should be suspended for the duration of treatment.

If you missed 1 active tablet:

If you missed 2 active tablets in a row during the first or second week:

If you missed 2 active tablets in a row during the third week:

If you missed 3 or more active tablets (during the first 3 weeks):

If you missed any of the 7 inert tablets during the 4th week:

If you missed any tablet from the package, and the expected menstruation did not occur, visit a doctor. Do not take pills until you get permission from your doctor.

Before starting the course of taking Chateal tablets, you need to undergo a general medical and gynecological examination. It is necessary to measure blood pressure, conduct a laboratory examination of urine for glucose, monitor liver function, examine the mammary glands and perform a cytological analysis of the vaginal smear to exclude pregnancy.

During the treatment, you need to undergo a medical examination approximately every 6 months.

Oral hormonal contraceptives can be used 6 months after the previous viral hepatitis.

If you have severe pain in the upper abdomen, an increase in the liver or the signs of intraperitoneal bleeding, you need to exclude a liver tumor. In this case, you must stop taking the drug.

Some studies have found an increase in the incidence of cervical cancer among women who have been taking ethinyl estradiol and levonorgestrel contraceptives for a long time.

If you have no menstruation, pregnancy should be excluded.

If you have a liver disorder, you need to undergo medical supervision every 2-3 months.

If you have vomiting or diarrhea, the contraceptive should be continued. In addition, you need to use a non-hormonal method of contraception.

The use of any combination oral contraceptive increases the risk of venous thromboembolic disease. The risk of these diseases reaches a maximum in the first year of taking medications.

The likelihood of thromboembolic disease when using oral contraceptives containing ethinylestradiol and levonorgestrel is 20 cases out of 100,000 women per year.

Some factors increase the risk of thromboembolic diseases: smoking, obesity, varicose veins, cardiovascular diseases, diabetes, migraine. Before using Chateal tablets in the presence of these factors, it is necessary to consult a doctor.

The risk of thromboembolic diseases associated with the use of combined oral contraceptives increases with age and is exacerbated with smoking. Therefore, women over the age of 35 are recommended to completely quit smoking.

Chateal should be discontinued immediately in the following cases:

The drug does not affect the ability to drive a car or work with machines.