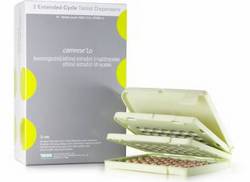 CamreseLo is a combination hormone medication which is used to prevent pregnancy. The drug contains 2 female hormones, ethinyl estradiol and levonorgestrel.

The contraceptive effect of CamreseLo is due to the complementary mechanisms of the active substances, ethinyl estradiol and levonorgestrel. They suppress ovulation, increase the viscosity of the secretion of the cervix, prevent the implantation of a fertilized egg.

When using this extended-cycle contraceptive, the amount of menstrual bleeding decreases to 4 per year. In the last 7 days (days 85-91), when 10 mcg of ethinylestradiol is used instead of placebo, menstruation-like bleeding occurs.

Tablets are taken in the order indicated on the back of the blister. Take 1 tablet per day, at the same time, starting from the first day of your period, for three months (91 days). Begin a new 91-cycle of the contraceptive once you have taken the last tablet from the previous blister.

In case of an overdose, the body may react in the form of dyspepsia and metrorrhagia. There is no specific antidote, which could be used in case of an overdose of CamreseLo. Treatment is prescribed depending on the symptomatology to remove unwanted symptoms.

In some cases, the medication can cause the following side effects:

CamreseLo is contraindicated for use if the patient is diagnosed with:

Do not use this contraceptive if you are smoking and older than 35 years, because you have an increased risk of vascular disorders that may lead to thromboembolism.

Ethinyl estradiol and levonorgestrel can interact with the following drugs:

Consult a doctor before combining CamreseLo with any medications.

This drug is not prescribed during pregnancy and lactation (breastfeeding).

Becoming pregnant while taking birth control requires immediate drug discontinuation. However, studies have not revealed an increased risk of defects in children whose mothers took sex hormones before pregnancy or at the early stages of pregnancy.

Oral contraceptives can reduce the amount of breast milk and change its composition, therefore, CamreseLo is contraindicated for use during lactation.

If you miss a pill, you should take it within the next 12 hours. Otherwise, you should continue taking birth control pills at the usual time of the next day, ignoring the missed pill. Missing tablets increases the likelihood of spotting.

When using a biphasic contraceptive, a reliable contraceptive effect occurs only in the second cycle of drug administration, therefore it is necessary to use other non-hormonal contraceptive methods in the first half of the cycle.

Fertility is restored in 1-3 menstrual cycles after discontinuation of the medication.

After childbirth or abortion (miscarriage), you can use birth control pills only after the first normal menstrual period.

Before taking the tablets and every 6 months, it’s recommended to undergo general medical and gynecological examination.

If you have diarrhea or vomiting, you need to take an additional pill of CamreseLo because the contraceptive effect can be reduced. Besides, it’s recommended to use additional non-hormonal methods of contraception.

Stop taking birth control pills if you have the following symptoms:

In addition, you should cancel oral contraception 3 months before the planned pregnancy and 6 weeks before the scheduled surgery followed by prolonged immobilization.

Moderate spotting during the course does not require the withdrawal of the drug.