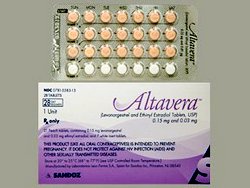 Altavera is a combination birth control pill containing 2 female hormones: ethinyl estradiol and levonorgestrel, that are used to prevent ovulation.

Altavera is a combined oral contraceptive containing ethinyl estradiol and levonorgestrel. The therapeutic effect of the drug is associated with the inhibition of pituitary secretion of gonadotropic hormones. Levonorgestrel blocks the release of follicle-stimulating and luteinizing hormones of the hypothalamus. As a result of the oppression of the pituitary gland by gonadotropic hormones, the maturation of the egg and its release from the ovary slows down. Ethinyl estradiol enhances the contraceptive effect of the drug while maintaining a high viscosity of the cervical mucus. This protects the uterine cavity from a free entry of spermatozoa. Regular use of birth control pills, in addition to the contraceptive effect, helps to normalize the menstrual period, prevent the development of tumors and other gynecological diseases.

A tablet is taken orally, with water. A woman determines the daily intake time on her own and strictly observes it throughout the course. It’s recomended to take the drug after breakfast or dinner. Since the contraceptive effect is ensured by maintaining a constant concentration of hormones in the blood plasma, the interval between doses should not exceed 36 hours. A tablet is taken daily, starting from the 1st or the 5th day of menstrual bleeding, for 28 days on hte order specfied on the blister. Menstrual bleeding occurs 2-3 days after you have started to take inert pills. After 28 days, when the package is empty, you need to begin a new pack, even if menstrual bleeding continues.

In some cases, Altavera tablets can cause the following side effects:

Do not use Altavera for birth control if you have any of the following conditions:

Altavera can interact with the following medications:

Altavera contraceptive is contraindicated for use during pregnancy and lactation. If conception occurred during the period of contraception, the drug should be canceled immediately.

If you decide to use this drug during lactation, breastfeeding should be discontinued.

If you missed an active pill, take it immediately, as soon as you remember about your mistake. If a delay does not exceed 12 hours, the contraceptive effect of Altavera is preserved. If a missed dose is taken in a period exceeding 36 hours from the time of taking the previous pill, the contraceptive effect is reduced. In this regard, you should continue taking birth control pills and simultaneously use barrier methods of contraception until the end of the menstrual period.

If you missed an inert pill, discard it and continue taking the pills at the usual time.

If a woman has vomiting or diarrhea after taking a pill, there is a risk of incomplete absorption of the drug into the blood and a violation of the hormonal background. If vomiting or diarrhea disappear within one day, it is recommended to take an additional 1 pill from the package and continue the treatment. If vomiting and diarrhea last for several days, the contraceptive effect of the drug is reduced, therefore, you need to use barrier-type contraceptive methods until the end of the menstrual period.

During the period of using the drug, the examination should be performed once every 6 months.

Recovery of fertility after discontinuation of the contraceptive occurs quickly enough (after 1-3 menstrual period).

After childbirth or abortion, the use of this oral contraceptive is recommended after the first independent menstrual period.

The risk of developing vascular pathologies with serious consequences (stroke, myocardial infarction) is increased if the hormonal contraceptive is used against the background of smoking, especially at the age of over 35 years.

Spotting of a moderate nature during the course of contraception is not the reason for discontinuing the drug.

The reasons for the immediate cessation of Altavera use include conception, a newly developed migraine headache, the appearance of early signs of phlebitis and phlebotrombosis in the form of unusual pain or bloating of the veins on the legs, visual impairment, cerebrovascular disorders, sensation of stitching painsin the chest during breathing or coughing of unknown etiology, increased blood pressure, jaundice.

Women planning a pregnancy should stop taking birth control pills and use other contraceptives within three months. It is possible to become pregnant only after three menstrual periods.

With a planned surgical intervention followed by a prolonged immobilization, the use of Altavera tablets should be discontinued no later than 1.5 months before surgery.