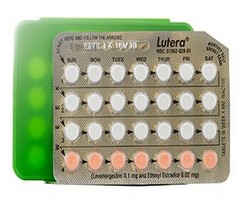 Lutera blocks the release of the follicle-stimulating hormone and luteinizing hormone of the pituitary gland, interrupting the process of ovulation and imitating the physiological hormonal cycle. The drug excludes all the undesirable effects associated with the hyperfunction of estrogens and progestins: menstrual disorders, hyperplastic endometrial processes, fibrocystic changes in the mammary glands, ovulatory syndrome and premenstrual tension syndrome.

The tablets have a contraceptive estrogen-gestogenic action. When used regularly, the drug normalizes the menstrual cycle and helps prevent a number of gynecological diseases, including those of a tumorous nature.

Each pack contains 21 active tablets with hormones (levonorgestrel 0.1mg, ethinylestradiol 0.02mg) and 7 pills with no medication. Take 1 active pill every day for 21 days in a row. Ater that, take an inactive pill every day for 7 days. After you have taken the last inactive tablet, start taking pills from a new pack without interruption. If you do not have a period, consult a doctor.

According to this scheme, Lutera is used as soon as you want to prevent pregnancy. When switching to this preparation from another oral contraceptive, a similar scheme is used.

After an abortion, it is recommended to start taking the medication on the same day or the day after the operation.

After giving a birth, you should start taking the drug no earlier than the first day of menstruation after the first two-phase period.

Cases of undesirable effects due to an overdose of Lutera is not known.

Do not use Lutera if you have any of the following conditions:

The use of Lutera tablets is associated with an increased risk of the following adverse reactions:

Lutera my interact with the following medications:

What if I miss a pill of Lutera?

If you for any reason did not take the pill at a certain time, you should take it within 12 consecutive hours. The inhibition of ovulation cannot be considered stable if the break between the two tablets takes more than 36 hours. However, in order to prevent premature bleeding, you should continue using Lutera, with the exception of the missed tablets from the already started package. In this case, it is recommended to use additional non-hormonal contraceptives (except for a “calendar” method).

This does not apply to 7 inactive tablets that do not contain hormones.

Smoking women taking this hormonal contraceptive have an increased risk of developing vascular diseases with serious consequences (myocardial infarction, stroke). The risk increases with age and depending on the number of cigarettes smoked (especially in women older than 35 years).

At least three months before the planned pregnancy, the drug should be discontinued. This contraceptive is contraindicated in pregnancy and breastfeeding.

Product
Friday, February 19, 2021
★★☆☆☆
“ Lutera was the first contraceptive that I bought. 3 months after my hair started to fall out. I later found out that this birth control gave me telogen effluvium (a condition where you have increased hair fall). I would prefer avoiding this birth control all together and choose a low androgen pill. This experience has been deteriorating and definitely not worth it.”
- Katherine Johnson
Product
Friday, February 5, 2021
★★★★☆
“ I have changed many birth control pills and this option is the best! The only adverse effect I have suffered is breast growth ( tenderness). The periods are very mild, no convultions, mild bleeding for 3 days. The first week of taking the pill, I felt a lite nausea. I have taken this pill for 2 years now, and it is great.”
- Alice Alvarez