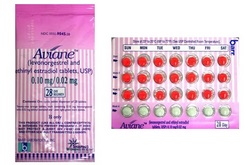 Aviane is a combination of female hormones (levonorgestrel and ethinyl estradiol) used to prevent unwanted pregnancy.

Aviane has a progestagenic and anti-estrogenic activity, due to which the process of ovulation is inhibited, and pregnancy does not occur. Preparations with levonorgestrel and ethinyl estradiol make cervical mucus more viscous, which makes it difficult for the sperm to enter the uterus. In addition, they affect the growth of the endometrium, slowing it, so even if the fertilization of the egg occurs, it will not be able to gain a foothold in the uterus because of the small thickness of the inner mucosa. Regular intake of the contraceptive slows the production of luteinizing and follicle-stimulating hormones, lowers the function of the yellow body.

Take Aviane exactly as prescribed by your doctor. Do not take more or less or more than recommended.

You will receive the first tablet on the first day of your period or on the first Sunday after the start of the period. You may need to use additional birth control, such as condoms or spermicide when you first start using Aviane.

Take one tablet daily at the same time of the day. When the tablets are over, start a new package the next day. You can get pregnant if you miss one tablet.

Aviane 28-day birth control pack contains 21 active pills with hormones and 7 “reminders” to keep you on a regular basis. Your period usually starts when you use these reminders.

You may have a breakthrough bleeding, especially during the first 3 months. Tell your doctor if this bleeding continues or is very painful/abundant.

Use additional birth control if you have a severe vomiting or diarrhea.

When taking Aviane pills, you need to visit your doctor regularly.

Aviane is contraindicated in the following conditions:

Take Aviane with caution if you have any of the conditions mentioned below:

Smoking increases the risk of serious cardiovascular side effects from the use of Aviane. This risk increases with age and the incidence of smoking (15 or more cigarettes per day) and is highly relevant in women over 35 years of age. Women using this oral contraceptive should be strongly advised not to smoke

The above-mentioned side effects may worsen with an overdose of the drug, so you should strictly adhere to the regimen and the number of tablets.

Aviane is contraindicated during pregnancy and breastfeeding.

If the pregnancy is detected during the use of this contraceptive, the drug should be immediately canceled. Numerous epidemiological studies have not revealed an increased risk of developmental defects in children born to women who received Aviane before pregnancy, or the presence of teratogenic effects when the drug was used during early pregnancy.

The combination of levonorgestrel + ethinyl estradiol, like other COCs, can reduce the amount of breastmilk and change its composition, so the use of this combination is contraindicated until the end of breastfeeding. A small amount of sex hormones and/or their metabolites can penetrate into breast milk and influence the health of the child.

Before starting Aviane and, subsequently, every 6 months. it is recommended to have a general medical and gynecological examination, including cytological analysis of the smear from the cervix, assessment of the mammary glands condition, determination of blood glucose, cholesterol and other liver function parameters, blood pressure control, urinalysis).

The use of the drug by young women with a thromboembolic disease is not recommended.

The use of oral contraception is allowed no earlier than 6 months after viral hepatitis, provided that hepatic functions are normalized.

When you have sharp pains in the upper abdominal areas, hepatomegaly and signs of intra-abdominal bleeding, this may be due to a liver tumor. If necessary, the drug should be discontinued.

If the hepatic function worsens during the reception of Aviane pills, the therapist’s consultation is necessary.

In the case of vomiting or diarrhea, the drug should be continued with using additional, non-hormonal method of contraception.

Smoking women taking hormonal contraceptives have an increased risk of developing vascular diseases with serious consequences (myocardial infarction, stroke). The risk increases with age and depending on the number of cigarettes smoked (especially in women older than 35 years).

Aviane should be discontinued in the following cases:

The influence Aviane on the ability to manage a vehicle and other mechanisms:

The drug does not affect the ability to drive a vehicle or operate mechanisms associated with an increased risk of injury.