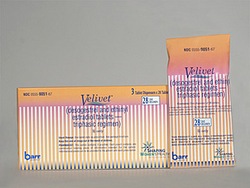 Velivet is a triphasic contraceptive drug the main components of which are ethinyl estradiol and desogestrel. The ovulation suppression is the main aim of this medication successfully implemented.

Velivet (ethinyl estradiol/desogestrel) is an oral birth control for preventing unwanted pregnancy. This drug changes the hormonal balance in the body, preventing the release of the egg during ovulation. The result is that the onset of pregnancy is almost excluded. The drug can also be prescribed to regulate the menstrual cycle and ease pain symptoms during menstruation. The physician may prescribe this birth control medication also for the treatment of other diseases not listed above.

Desogestrel inhibits the synthesis of gonadotropic hormones, mostly LH, thus prevents the maturation of the follicle. In other words, it blocks ovulation.

Ethinyl estradiol is a synthetic analog of the follicular hormone estradiol, which regulates and controls the menstrual cycle.

Along with these central and peripheral mechanisms preventing the maturation of an ovum capable of fertilization, the contraceptive effect is achieved due to an increase in the viscosity of cervical secretion, which makes it difficult to enter the uterine cavity by spermatozoa.

Additionally to birth control properties, such a combination has a number of effects that can be considered when selecting a method of contraception. Breakthrough reactions become more regular, flow less painful and are accompanied by less ample bleeding. The latter circumstance leads to a decrease in the frequency of concomitant iron deficiency anemia.

To ensure effective and safe protection from unwanted pregnancies, Velivet 28 should be applied strictly as prescribed by the physician. The standard recommended dosage is 1 tablet once a day. Individual dosage is chosen in accordance with the patient’s health condition and the symptoms’ severity. These pills should be washed down with a full glass of water and can be taken on an empty stomach. In case of stomach upset, it is recommended to take it after a meal or a snack. It is forbidden to crush or chew tablets, as this may alter the drug effect.

When using Velivet 28, patients may experience side effects such as:

If you experience any anxiety or severe symptoms, you should immediately consult your doctor to make changes in the frequency and dose of the drug and prevent the development of further complications.

You should provide for your doctor an information about the presence of such diseases as obesity, varicose veins, heart failure, history of depressive disorder, cholelithiasis in the anamnesis, or renal dysfunction. With these diseases, a dose adjustment may be necessary to prevent unwanted complications.

If an allergic reaction or a hypersensitivity reaction occurs, seek medical attention immediately. As a rule, such reactions are manifested in the form of urticaria, edema, skin rashes, chest pains, as well as difficulty in breathing and swallowing.

Some combinability with drugs can lead to breakthrough bleeding and/or a reduction in contraceptive action. The list includes the drugs that induce microsomal enzymes, which leads to increased clearance of sex hormones (eg, hydantoin, barbiturates, primidone, carbamazepine, rifampicin, rifabutin and oxcarbazepine, possibly topiramate, felbamate, ritonavir, griseofulvin and preparations containing St. John’s Wort). The maximum level of induction is usually achieved no earlier than 2-3 weeks after the beginning of the treatment but can last up to 4 weeks after the drug is discontinued. When using drugs that induce microsomal enzymes, a barrier method of contraception should be used in addition to the birth control pills during the course of treatment and within 28 days after discontinuation of their use.

It has also been established that antibiotics, such as ampicillin and tetracycline, reduce the contraceptive effect, but the mechanism of interaction is not specified. Women who take any of these drugs need to additionally use a barrier or other contraceptive methods.

Women who take antibiotics (except for rifampicin and griseofulvin) should additionally use the barrier method of contraception during the course of treatment and within 7 days after the antibiotic cancellation.

If the duration of taking the concomitant drug exceeds the number of birth control pills in the package, you must start the next package without interruption between them.

Specialists recommend increasing the dose of a steroid contraceptive to women undergoing a long-term treatment with drugs that induce hepatic enzymes. If a high dose of the contraceptive is not recommended or if such a high dose is insufficient or dangerous, for example, resulting in irregular bleeding, another method of contraception is recommended.

Herbal preparations containing St. John’s wort (Hypericum perforatum) may lead to the disappearance of the contraceptive effect while maintaining the effect for a minimum 2 weeks after St. John’s wort withdrawal.

Any birth control pills can decrease the tolerance to glucose increasing the demand for insulin or oral antidiabetics.

Oral contraceptives can influence the metabolism of other medications. Their concentration may increase (eg, cyclosporine) or decrease (eg lamotrigine) respectively, in plasma and tissues.

The 1st week. A woman should immediately take the skipped pill, even if she has to take 2 pills at a time. Then it is necessary to continue regular application at the habitual time of a day. The next 7 days should be followed by the use of a barrier method of contraception, for example, a condom. If there was a sexual intercourse in the previous 7 days, the risk to become pregnant should be accounted. The more pills are missed and the closer it is to the end of the course, the higher the risk of pregnancy is.

2nd week. A woman should immediately apply the skipped pill, even if she has to take 2 tablets at one and the same time. After that, you should continue applying the preparation regularly at the habitual time of a day. In case of a proper use of the pills for 7 days before the skipped pill, there is no need to use additional contraceptive methods, but if more than 1 tablet is missed, an additional contraceptive method should be used within next 7 days.

3rd week. The risk of decreasing the birth control effect is very high. However, the pregnancy can be prevented by adjusting the regimen of taking the pills. Thus, there is no necessity to use additional contraceptive methods if 1 of the following 2 means is used, ensured that all the tablets are correctly applied within 7 days prior to the skipped pill. Otherwise, a woman should apply the additional contraception within 7 days to protect herself from an unexpected pregnancy. The following two steps should be followed:

Celivet category for the fetus according to the FDA is X. It is contraindicated in pregnancy. In the case of pregnancy when taking a combination of desogestrel + ethinyl estradiol a woman should arrest taking it. This combination can affect lactation, because it can decrease the amount and alter the breast milk components. The combination is contraindicated until the end of breastfeeding. A small amount of sex hormones and/or their metabolites can be excreted into breast milk.

Product
Thursday, April 8, 2021
★★★★☆
“ Switched to this birth control 4 months ago from Yasmin pills. I have no side effects other than breast swelling before periods and I reduced sex drive.”
- Deneen Merritt
Product
Thursday, March 25, 2021
★★★★★
“ I have been on this BC for about a year, no mood swings, no cramps, and I'm happy. I don't know Kelnor has made me lose weight... that might not be a side effect, still, I love it)))!!”
- Martha Taylor
Product
Friday, March 19, 2021
★★★☆☆
“ The pill was effective, no severe side effects, my period was light, painless and short. However, I had to stop taking it as it decreased my libido.”
- Luella Shepherd
Product
Tuesday, March 2, 2021
★★★★★
“ Velivet works great, I haven't experienced any severe side effects. I have been using it for over 4 years.”
- Helen Thompson
Product
Tuesday, February 16, 2021
★★☆☆☆
“ Made me very nauseous, gave me migraines. Moreover, I lost my appetite. I'm switching to another pill tomorrow!”
- Marlyn Pratt
Product
Friday, February 5, 2021
★★★★★
“ I've been on Velivet for 3 years. No awful side effects, no weight gain, no mood changes. I've been happy with this pill.”
- Cruz Gaspar