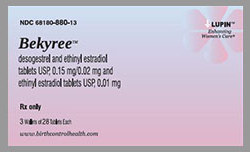 Bekyree (desogestrel and ethinyl estradiol) is an oral hormonal contraceptive indicated for the prevention of unwanted pregnancy.

The contraceptive effect of the drug is due to the inhibition of the ovulation process, which is confirmed by the absence of the ovulatory follicle during an ultrasound and the absence of an increase in the values of luteotropic hormone (LTG) and progesterone in the blood in the middle of the menstrual period. At the same time, desogestrel, as well as other progestogens, has the ability to increase the viscosity of cervical mucus, preventing the spermatozoa from progressing. Pearl’s Index is 0.4. The use of the drug leads to a decrease in the content of estradiol in the blood plasma to values corresponding to the early follicular phase. Progestagens affect carbohydrate and lipid metabolism.

Tablets are started on the first day of the menstrual period. Take 1 tablet a day for 28 days, if possible at the same time of a day. Begin a new pack without interruption, even if the bleeding has not stopped. This method of taking tablets is followed as long as it is necessary to prevent pregnancy. If tyou take tablets correctly, the contraceptive effect is maintained for a period of taking inert tablets.

The first dose of the drug:

Taking the drug after childbirth:

Women who do not breastfeed should start taking birth control pills 21 days after delivery. In this case, there is no need to use other methods of contraception. If a woman had sexual contact after childbirth, she should wait until the next menstruation. If a woman decides to take pills later than 21 days after delivery, then additional contraceptive methods should be used in the first 7 days.

Taking the drug after an abortion:

After an abortion, pills should be started on the first day, in this case, there is no need to use additional methods of contraception.

Switching from another oral contraceptive:

Switching from mini-pills containing only progestogen:

The first pill must be taken on the first day of the period.

You do not need to use additional methods of contraception. If menstruation does not occur while taking mini-pils, you can start taking Bekyree on any day of the period, but in this case, additional contraceptive methods should be used in the first 7 days.

In the above cases, the following non-hormonal methods are recommended as additional methods of contraception: use of a cervical cap with a spermicidal gel, a condom or abstaining from sexual contact. The use of the calendar method, in this case, is not recommended.

If there is a need to postpone menstruation, then birth control pill should be continued from the new package without taking inert tablets. This does not reduce the contraceptive effect of the drug.

After taking large doses of desogestrel and ethinyl estradiol, the following symptoms of overdose were reported: a severe headache, dyspeptic disorders, cramps of the calf muscles.

Treatment: if an overdose is detected in the first 2-3 hours or a large number of tablets have been taken, it is necessary to wash the stomach. The drug does not have a specific antidote, the treatment is symptomatic.

In some cases, Bekyree pills can cause the following side effects:

If you have severe side effects, it is necessary to interrupt the course of taking the drug: arterial and venous thromboembolic diseases (myocardial infarction, stroke, deep vein thrombosis of the lower extremities, thromboembolism of the lungs, thromboembolism in the hepatic, mesenteric, renal vessels or in one of the wipes,; severe or moderate severity, sex-hormone-dependent tumors, breast cancer, reactive systemic lupus erythematosus, Sydenhem chorea, a malignant liver tumor in women who take hormonal contraceptives for a long time.

Contraceptives are contraindicated in the following cases:

In the presence of any of the following conditions, the benefits or the possible negative effects of taking oral contraceptives are individually assessed in each case:

The condition of a woman must be carefully controlled. If any of these conditions appear or worsen while taking the drug, you should stop taking pills and switch to another, non-hormonal method of contraception.

Oral contraceptives can reduce tolerance to carbohydrates, which increases the need for insulin or oral antidiabetic agents.

Use of Bekyree during pregnancy and lactation is contraindicated.

Teratogenic effect of the drug is not found if the woman took birth control pills at the beginning of pregnancy.

Hormonal contraceptives reduce the release of milk, change the composition of milk and enter mother’s milk in small quantities, so this drug is not indicated for use during a breatfeeding period.

Before starting the use of birth control pills, you should collect a detailed family and personal history and undergo general and gynecological examinations (blood pressure measurement, laboratory tests, mammary gland and pelvic examination, cytological smear examination) to exclude possible contraindications for use and pregnancy. These studies need to be repeated periodically. Periodic studies are important, as risk factors or contraindications are identified at the beginning of taking the tablets. When deciding whether to take contraceptives, it is necessary to evaluate the ratio of potential risk and apparent benefits in the form of oncoproteactive properties in relation to ovarian and endometrial cancer.

Under the influence of oral contraceptive pills – in connection with the estrogen component – the level of certain laboratory parameters (functional parameters of the liver, kidneys, adrenal glands, thyroid gland, blood coagulation factors and fibrinolytic factors, the level of lipoproteins and transport proteins) may change.

It is necessary to monitor the status of a woman with the purpose of timely detection of thromboembolic complications.

The risk of arterial or venous thromboembolic disorders increases:

In these cases, the course of taking the tablets is temporary discontinued: it is desirable to stop taking the medication 4 weeks before the surgery and to restore it 2 weeks after the remobilization.

The effectiveness of Bekyree may decrease if irregular bleeding or spotting occurs after several months of its use. If a woman has no related disorders and pregnancy is doubtful, then the drug should be continued until the package is empty. If you do not have menstrual bleeding in the second cycle, then you need to stop taking the pills and resume it only after the pregnancy is excluded.

If vomiting or diarrhea occurs after taking an active pill, then the absorption of the drug may be incomplete. If the symptoms disappeared within 12 hours, then you need to take an additional pill. After this, you should continue taking the pills as usual. If symptoms persist for more than 12 hours, additional contraceptive methods should be used during vomiting or diarrhea and for the next 7 days.