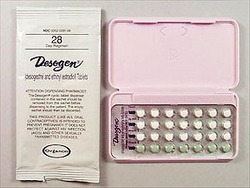 Desogen is a combination hormone birth control pill which is used to prevent pregnancy. It contains 2 hormones: a progestin (desogestrel) and an estrogen (ethinyl estradiol).

Desogen is a monophase oral contraceptive containing a combination of estrogen and progestogen. The drug contains a synthetic gestagenic and estrogenic components that are more active than natural sex hormones. They work by preventing the release of follicle-stimulating and luteinizing hormones, which hinders the process of ovulation. The effect is enhanced by increasing the viscosity of cervical mucus, which makes it difficult to penetrate the spermatozoon into the uterine cavity. A distinctive feature of the drug is the minimal content of the estrogen component, which reduces the risk of developing estrogen-dependent side effects such as nausea, mammary glands, weight gain, thromboembolic complications, etc. The progestogen content of the generation lll is associated with the absence of adverse metabolic effects, primarily carbohydrate and lipid exchanges. In general, Desogen has a minimum number of side effects and good tolerability with proper use.

Start taking birth control pills on the first day of menstruation. Take 1 tablet at exactly the same time for 28 days, without any breaks. Menstrual bleeding occurs 1-2 days after you have taken the last active pill. One the pack is empty, start taking the pills from the next pack (even if the bleeding has not stopped). For your convenience, the days of the week are indicated on the blister.

When switching to Desogen after another oral contraceptive, a similar scheme is used.

The instructions for use state that the common symptoms of drug overdose are nausea and uterine bleeding. A woman feels weak, dizzy, her blood pressure drops. In the first 2-3 hours after the detection of an overdose, it is recommended to rinse the stomach and take activated charcoal. There is no specific antidote for ethinyl estradiol and desogestrel combination.

Desogen contraceptive is contraindicated in the following conditions:

Adverse events occur rarely. In connection with the minimum content of the estrogen component, the risk of acyclic spotting increases. Desogen should be taken correctly to avoid side effects (regularly, at the same time of the day, without missing the tablets).

In some cases, the medication can cause the following side effects:

However, these phenomena are usually temporary and disappear after 2-3 month of continuous use. With a longer period of use, pigment spots on the skin can rarely occur.

The likelihood of these side effects increases when taking hormonal medications without consulting specialists. The risk of negative reactions with the right selection of drugs is minimal.

Desogen pills should not be used in combination with:

Birth control pills should be used with caution in combination with:

It is important to remember that in connection with the minimal dose of estrogen, the risk of ovulation and/or bleeding is increased when the tablet is missed.

Combined oral contraceptives inhibit lactation, so they are not the right contraceptive choice when breastfeeding. A small amount of active substances can be excreted in breast milk.

After delivery, Desogen can be used after 21 days (non-breastfeeding women). If a woman is breastfeeding, the medication can be started after 5 months.

Desogen is not recommended for women who have a family history of thromboembolic disease.

At the time of taking the drug, medical supervision is required at least every 6 months.

After viral hepatitis suffered, the use of oral contraception is allowed no earlier than 6 months, provided that hepatic functions are normalized.

Benign or malignant liver tumors were very rarely observed against the background of the continuous use of sex hormones (more than 8 years). When you have a sharp pain in the upper abdomen, hepatomegaly and signs of intra-abdominal hemorrhage, there may be a suspicion of a liver tumor. In this case, the drug should be discontinued until the cause is determined.

In case of violations of the liver functions during the use of the drug, it is necessary to monitor the condition of the women every 2-3 months.

In the absence of menstrual bleeding, continued use of Desogen contraceptive is allowed only after exclusion of pregnancy.

If you have vomiting or diarrhea, continue taking tablets, but it is recommended to use an additional, mechanical method of contraception.

In women taking oral contraceptive preparations containing estrogens, the probability of developing thromboembolism of different localization may increase. This risk increases with age, mainly among smokers. In this regard, women over 30 years of age who take Desogen are advised to quit smoking.

If a woman is planning a pregnancy, the drug should be canceled at least three months before the expected conception period.