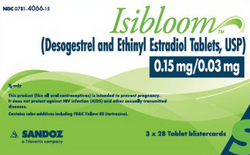 Isibloom is an oral contraceptive containing desogestrel and ethinyl estradiol indicated for the prevention of pregnancy.

Isibloom is a combination oral contraceptive which inhibits the synthesis of gonadotropins and suppresses ovulation. In addition, the movement of spermatozoa through the cervical canal slows down, and a change in the state of the endometrium prevents the implantation of a fertilized egg. Ethinyl estradiol is a synthetic analogue of endogenous estradiol, desogestrel has a pronounced gestagenic and antiestrogenic action, similar to endogenous progesterone, weak androgenic and anabolic activity. The drug has a beneficial effect on lipid metabolism: it increases the concentration of high-density lipoprotein in the blood plasma without affecting the content of low-density lipoprotein. The drug reduces the amount of blood loss during menstrual bleeding (with initial menorrhagia), normalizes the menstrual period, has a beneficial effect on the skin (especially in acne vulgaris).

Tablets are taken orally, from the first day of the period. Take 1 tablet a day for 28 days, if possible at the same time of day. After taking the last active tablet, you will l have a menstrual-like bleeding as a result of the withdrawal of the drug. Begin a new package without making a break (on the same day of the week). This pill regimen is followed as long as there is a need for contraception. When complying with the rules of admission, the contraceptive effect is maintained for 7 hormone-free days.

In the case of an overdose, you may experience nausea, vomiting, spotting. The drug does not have a specific antidote, treatment is symptomatic. If overdose symptoms occur in the first 2-3 hours after taking a tablet, gastric lavage may be indicated.

If you have the following side effects after taking Isibloom, you should stop using the drug:

arterial or venous thromboembolism of the hepatic, mesenteric, renal, retinal arteries and veins;
Chorea Sydenham (passing after the abolition of the drug).

Other side effects are less severe but more common. The feasibility of continuing hormonal contraception is decided individually by a doctor, based on the benefit/risk ratio:

Isibloom is contraindicated for use in the presence of the following conditions/diseases:

Use of Isibloom during pregnancy and breastfeeding is contraindicated.

If the delay in taking an active pill is no more than 12 hours, you should take the missed pill and then continue taking pills at the usual time. If the delay exceeds 12 hours, then contraceptive reliability in this period is not guaranteed and you need to use additional contraceptive methods.

Missing active pills increases the likelihood of ovulation and/or bleeding, so in such cases, it is recommended to use additional methods of contraception. If you missed any inert tablets, you may throw them away since they do not contain any medication.

When using Isibloom for birth control, medical supervision is required at least every 6 months. After suffering viral hepatitis, use of the drug is possible no earlier than after 6 months (with normalization of liver function).

In the case of vomiting or diarrhea, the use of a barrier method of contraception is required.

When using oral hormonal contraceptives, you should stop smoking (increased frequency of thromboembolism of different localization, especially in women over 35 years of age).

The drug (ethinyl estradiol/desogestrel) cannot be used by men.

Since the drug can be potentially dangerous for certain groups of patients, it is necessary to inform your doctor about pregnancy, breastfeeding, the presence of allergies and other diseases (see “Contraindications”), as well as the use of any other medicines, nutritional supplements and herbal medicines.

If you experience an allergic reaction or a hypersensitivity reaction, you should immediately seek medical attention.

Product
Wednesday, May 5, 2021
★★☆☆☆
“ This pill caused spotting, frequent mood changes, migraines, nausea, anxiety. I’m finishing the pack and calling my doctor”
- Amilia: Haley
Product
Tuesday, April 20, 2021
★★★★★
“ My experience with Isibloom is great. 5 months and no complaints. Periods are light and short. I also appreciate breasts increased by one size!))) No noticeable weight gain, no mood changes, no cramps. In general, a great experience!”
- Mildred Mendieta
Product
Wednesday, April 7, 2021
★★★★☆
“ I’ve only been on this birth control for about 3 months and the only adverse reaction I have is cramping before periods. But my skin cleared up very noticeably. I will continue to use it.”
- Doris Anderson
Product
Friday, March 26, 2021
★★★☆☆
“ I’ve been taking Isibloom for 7 months now and the only side effect I’ve had has been hair loss. I don’t know why that is. No cramps, depression, acne, spotting, moods or something like this.”
- Pamela Brooks
Product
Friday, March 12, 2021
★★☆☆☆
“ Isibloom gave me the worst nausea I've had in my life. Going to call my doctor and ask for something else. Everyone is different but this pill is not for me.”
- Jennie Welch
Product
Friday, February 26, 2021
★☆☆☆☆
“ I switched to this pill. The first week was fine, but then I started to suffer from major cramps and nausea. Next I had two weeks of continuous spotting. Had to quit it. Would not recommend.”
- Ina Patterson
Product
Tuesday, February 9, 2021
★★★★☆
“ Isibloom was ok. My acne got better. However I felt a little dizzy during the first 2/3 months of taking it. It didn’t cause mood swings. So I’d recommend it as BC.”
- Monique Sammons
Product
Saturday, November 9, 2019
★★☆☆☆
“ Starting taking COCs 2 years ago for my own purpose, I was looking for a lot of different information on the Internet. I had found answers, not to all my questions. Indeed, someone is losing weight and cleaning the skin, while someone is generally claiming that COC is a kind of slow death. So, what side effects I found: decreased libido, acne on the cheekbones, which indicates something related to the genitourinary system, a temperature of 37.2 - 37.5, which lasts a year, a very strong weakness. At some moment, I stopped drinking pills, because something was going wrong with the body. Then I visited a doctor and it turned out this preparation is a contraindication for me.”
- Lily
Product
Sunday, October 13, 2019
★★★☆☆
“ I took Isibloom for 6 years. In the first three years, I took breaks in admission for a couple of months annually (as I later found out that it was very harmful). I tool this drug without breaks for the next 2 years, during the same period health problems accidentally emerged that developed on the background on hormonal contraceptives. I took a break for a year to restore my body. Then I took it another year and finally decided to say goodbye to Isibloom and other COCs. These pills are harmful to health. But remember, the body is individual for every woman. Consult your gynecologist first.”
- Isabella
Product
Saturday, August 24, 2019
★☆☆☆☆
“ I had stable periods all my life. I didn’t know acne or any other female problems. The cycle is stable lasting 28 days. After the second labor, the body could not recover, the periods were unstable, I suffered the wild pains (the painkillers were useless). I visited 3 different gynecologists and they all recommended Isibloom. No one asked for hormone tests. Improvements were as follows: stable periods, painless, hair began to look better and thicker, lost weight (a couple of kgs). Having taken this COC exactly for 9 months, in a couple of months my condition worsen. At first, I lost my hair, than acne on my temples, forehead, nose, chin, and then through the neck and back appear. Acne, both small and large subcutaneous pimples in large quantities. There were mood swings, terrible premenstrual syndrome, depression and all the signs of a lack of female sex hormones. I have been treated and is still recovering. I do not recommend taking this drug before you do not undergo a complete medical screening.”
- Sophia
Product
Monday, July 22, 2019
★★★★☆
“ Actually, I have been taking Isibloom for almost 5 years. I chose this type of pills on the recommendation of my gynecologist. If you also plan to choose COCs as contraception, the consultation should be carried out. There are no painful critical days when I started taking Isibloom. My skin condition improved, although I had not complained about pimples before. The regular cycle is the biggest advantage of this drug. I stopped taking it for half a year already. To be honest, this is such a relief because taking them at the same time every day was terribly annoying. I came to this decision when my periods days were shortened (from 5 to 3). It became scary as if the body loses its important functions. It was difficult to withdraw it, both psychologically and physically. But still, the effect of this drug is confirmed”
- Emily
Product
Wednesday, July 3, 2019
★★★★★
“ Birth control pills Isibloom - is popular among gynecologists and women. I want to note right away that medications cannot be taken without prior consultation with your doctor. I started taking these birth control pills about 2.5 years ago on the recommendation of my gynecologist as the method of contraception. These were my first oral contraceptives. The efficiency is 100%, periods are less painful. The drug did not affect the condition of the hair. The face skin has become better.”
- Paige