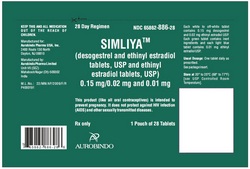 Simliya is a hormonal birth control preparation intended for a pregnancy prevention. It contains two hormones suppressing an ovulation and egg maturation.

Simliya is intended for an oral hormonal contraception.

This birth control drug is a combined oral contraceptive. Its main contraceptive effect is a suppression of gonadotropin synthesis resulting in the prevention of an ovulation. Additionally, when magnifying the cervical mucus viscosity, the movement of spermatozoa through the cervical passage slows down. A change in the endometrium state prevents a fertilized egg attachment.

When using the drug, it is observed a significant decrease in the amount of menstruation (with the initial menorrhagia). Finally, the menstrual cycle is normalized, and a favorable effect on the skin is noted (especially with acne vulgaris).

Simliya is a 28-days course. The drug is prescribed for a daily intake – 1 tablet at one and the same time containing 2 hormones: desogestrel and ethinyl estradiol. There is no a 7-day break. You continue taking birth control pills. It contains ethinyl estradiol but in a lower dosage. When taking this almost placebo pills the menstruation comes.

Side effects caused by Simliya, the appearance of which requires immediate discontinuation of the drug:

Medications that force hepatic enzymes, such as hydantoin, barbiturates, primidone, carbamazepine, rifampicin, oxcarbazepine, topiramate, felbamate, griseofulvin, drugs containing St. John’s Wort decrease the effectiveness of oral contraceptives and magnify the risk of breakthrough bleeding. The maximum level of effect is usually achieved no earlier than 2-3 weeks but can last up to 4 weeks after the drug withdrawal.

Ampicillin, tetracycline reduce the effectiveness of birth control drugs (the mechanism of interaction is not established).

If it is necessary to make a combination, it is recommended to use an additional barrier method of contraception throughout the course of treatment and for 7 days (for rifampicin – for 28 days) after drug discontinuation.

Oral contraceptives can decrease tolerance to carbohydrates, increase the need for insulin or oral antidiabetic drugs.

If the woman forgets to take the pill on time, and ша no more than 12 hours have passed, you just need to take a forgotten pill, and then continue the reception at the usual time. If more than 12 hours have passed between taking the tablets, contraceptive reliability is not guaranteed in this cycle, and additional methods of contraception are recommended.

If you miss one tablet on the first or second week of the cycle, you need to take 2 tablets the next day and then continue with regular reception, using additional contraceptive methods until the end of the cycle.

The use of the drug during pregnancy and breastfeeding is contraindicated.