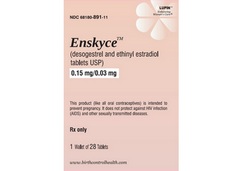 Enskyce is a combination birth control pill containing 2 hormones: ethinyl estradiol and desogestrel, that are used to prevent pregnancy.

Enskyce protects a woman from unwanted pregnancy. This happens for the following reasons: under the influence of the medicine, the production of hormones responsible for reproduction (gonadotropins) is interrupted. This results in the blocking of the ovulation process. Slime, which is on the cervix, under the action of the drug changes its composition and becomes a serious obstacle, which prevents spermatozoa from penetrating into the uterus. In some cases (very rarely) ovulation still occurs, but this does not lead to fertilization of the egg, as it does not have the ability to firmly adhere to the walls of the uterus due to the thinning of the endometrium under the influence of the drug.

Also, the remedy regulates lipid metabolism in the blood, which prevent the development of atherosclerosis symptoms, and improves the condition of the skin.

The first tablet should take on the first day of the period. Take 1 pill at the same time of a day for 28 days in a row (skipping is not recommended, otherwise the effect of contraception may not work).

After you have used all active 21 tablets, take 7 inert tablets (“reminders”). During this period, bleeding should occur. Once you have taken the last pill from the blister, begin a new pack, regardless of the beginning and end of menstruation.

If you follow the directions given above, the drug will work from the first day. If the use of tablets started from the 2nd to the 5th day of the menstrual poriod, you will need to use additional contraception methods for a whole week. If you started taking Enskyce tablets on the fifth day of your period, the drug will not be effective.

If a woman is recommended by a doctor to use this contraceptive after abortion (scraping), she can start taking the pills on the same day. If a woman has recently given birth to a child, she can use this contraceptive 21 days after delivery. But this can be done only in cases where a young mother does not breast-feed the baby. If she begins to use the drug after the specified period, she will need to use additional contraception methods.

If you previously used another hormonal birth control drug containing 28 tablets, you can use Enskyce according to the instructions immediately after their termination. If the previous pack contained 21 tablets, the use of Enskyce begins exactly one week after the end of the course of the previous medication.

If a woman used drugs containing progesterone, it is recommended to take Enskyce on the first day of the menstrual period if you have a menstrual bleeding.

In some cases, birth control pills can cause adverse reactions:

If you have any of the mentioned side effects after taking Enskyce tablets, consult a doctor.

Enskyce contraceptive is contraindicated in the presence of any of the conditions mentioned below:

The use of Enskyce during pregnancy and during breastfeeding is contraindicated.

The contraceptive should be taken without missing the days, at the same time of a day. Otherwise, its effect on the body can be reduced.

Product
Thursday, March 25, 2021
★★★★★
“ This pill is fantastic! I’ve been taking it for about 5 months now and have had no problems except minor anxiety. I have lost some weight on this medicine as well! The pill makes my periods less painful and less abundant. I’ve had no problem with libido. I definitely recommend Enskyce to anyone who is looking for a new contraceptive.”
- Cleo Brown
Product
Friday, March 12, 2021
★★★★☆
“ I have had none of the side effects that others have described above. I've been taking this contraceptive for a year now. I only had very slight breast tenderness when on my first pack, but very soon my body adjusted to the product.”
- Maria Yarbrough
Product
Friday, February 26, 2021
★★★☆☆
“ I've been taking this pill for about 6 weeks. I've been depressed, angry, and feel like crying all the time. My doctor said I’ll be fine it’s just my body getting used to the contraceptive. I haven’t had weight gain! I’m very happy.”
- Laverne Martin
Product
Thursday, February 11, 2021
★★★★★
“ I absolutely LOVE this pill. I have had NO side effects. I have taken so many other BC pills in the past and nothing worked well; I was depressed, anxious, moody all the time... However, Enskyce works for my body. Girls, give it a go. Some pills work different for some people, but you never know until you try.”
- Melissa Yamamoto
Product
Monday, November 30, 2020
★☆☆☆☆
“ It gave me full blown depression. It made me lose my libido, no interest whatsoever in sex, couldn’t even get wet if I tried. Started getting intrusive thoughts and lost interest in a lot of my hobbies. Took Enskyce for over 6 months. Please do not do this to yourself ladies ♥️”
- Lola R