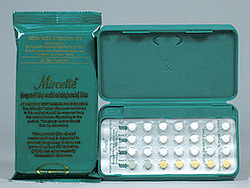 Mircette is a biphasic combination contraceptive containing 2 hormones: desogestrel and ethinyl estradiol that are used to prevent pregnancy.

Mircette tablets are indicated for oral contraception and menstrual disorders.

Mircette suppresses ovulation and increases the release of cervical mucus. The drug is able to regulate the menstrual cycle, prevents ripening of the follicle, thereby blocking ovulation.

Besides, the preparation prevents the maturation of the egg and increases the viscosity of mucus enveloping the cervix, thereby creating an obstruction for spermatozoa.

Mircette is produced in the form of tablets.

The tablets are taken orally in the order indicated on the blister. Take 1 pill daily for 28 days in a row, at a certain time of the day, with water. Take tablets from the next blister as soon as you finish the previous blister.

If you did not take COCs for the last 30 days, you’d better take Mircette on the first day of your period. Also, you can start taking the drug on the 2-5 day of your period, but during a week, you should use additional methods of contraception (such as condoms).

In case of correct and consistent use of the previous contraceptive method and with reliable information on the absence of pregnancy, you can switch to Mircette on any convenient day of the period.

In all the cases described above, during the first 7 days of applying Mircette, barrier contraceptives should be used.

After an abortion in the first trimester, you can start taking birth control pills immediately, without using any additional contraceptives.

After an abortion or delivery in the second trimester, it is recommended to start taking tablets after 21-28 days. If you need a later application of the drug, you need to use barrier contraceptives during the first 7 days.

With the simultaneous administration of a large number of Mircette tablets, there may be nausea, sometimes resulting in vomiting, as well as bloody vaginal discharge in young girls. There were no serious adverse effects of taking excessive doses of the drug. Treatment is symptomatic.

Mircette is contraindicated in the following conditions:

If you have any of the abovementioned painful conditions when using Mircette for birth control, you should immediately stop taking pills and seek medical help.

If you have any of the following risk factors/conditions, the physician must carefully weigh the expected benefits of taking Mircette tablets and the potential risk of adverse effects on women and prescribe the drug with extreme caution in:

Mircette birth control pills sometimes cause the following side effects:

The simultaneous use of birth control pills with other medications can lead to a decrease in the effectiveness of contraceptives, as well as the occurrence of acyclic bleeding.

If you are taking a COC with any of the aforementioned remedies, you should use additional, barrier contraceptives or completely switch to another contraceptive method.

If a woman develops severe gastrointestinal disorders, the absorption of active ingredients of Mircette (ethinyl estradiol and desogestrel) may occur in an incomplete volume, which requires an additional use of barrier contraceptives. When vomiting occurs within 3-4 hours after taking a pill, it is necessary to take an additional pill from another blister.

Changing the timing of the menstrual period

To delay menstruation, you need to miss inert tablets in a blister. This allows you to delay menstruation for any desired period of time. During this period, some women may have spotting (abundant or smearing). Renewal of normal conventional drug administration is possible after a mandatory 7-day interval.

The following recommendations are applicable in the case of missing an active pill. If you missed an inert pill, you may just throw it away and continue taking pills according to a generally accepted intake schedule.

With a 12-hour delay in taking a pill, the contraceptive effect of Mircette remains the same. The missed tablet must be taken in a 12-hour period and then you should follow the generally accepted schedule. Use barrier contraception in the first 7 days.

If a tablet is delayed for more than 12 hours, the contraceptive effect of the drug may decrease.

In the absence of the expected menstrual bleeding, you should exclude pregnancy.

Pregnant women should not take Mircette for birth control. When pregnancy occurs during the period of using the drug, it is necessary to interrupt the reception of the tablets. The studies did not reveal an increase in the likelihood of birth defects in infants whose mothers were taking COCs prior to pregnancy, as well as the teratogenic effects of COCs in case of their unintended use at the beginning of pregnancy.

Hormonal contraceptives can affect lactation by changing the composition and amount of breast milk, as well as releasing a number of sex steroids and/or metabolic products with it. In this regard, Mircette is contraindicated during breastfeeding.