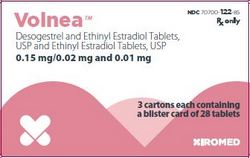 Ethinyl estradiol / desogestrel strengthens the central and peripheral effects of cyproterone acetate on ovulation, retains a high viscosity of the cervical mucus, making it difficult for spermatozoa to penetrate into the uterine cavity and contributing to a reliable contraceptive effect.

Each Volnea pack contains 21 active pills and 7 inert pills. Take 1 tablet daily, at about the same time, with a small amount of water, in the order indicated on the blister pack. Tablets are taken continuously for 28 days. Take tablets from the next package when the previous one is empty. The “withdrawal” bleeding usually occurs 2-3 days after the start of taking inert tablets and does not necessarily end at the start of the next package.

Volnea contraceptive may cause the following side effects:

Volnea tablets are contraindicated for use in the following conditions (present or in the history):

If any of these conditions occur against the background of taking Volnea contraceptive, the drug should be immediately withdrawn.

The drug is not intended for use in men.

Volnea can interact with inducers of microsomal hepatic enzymes (hydantoins, barbiturates, primidone, carbamazepine and rifampicin, oxcarbazepine, topiramate, felbamate and griseofulvin), ampicillin, rifampicin and tetracyclines. This interaction can lead to breakthrough uterine bleeding or decrease the contraceptive reliability of the drug.

Volnea drug is contraindicated during pregnancy.

If the pregnancy occurred during the use of birth control pills, stop using them immediately. According to preclinical research, it is impossible to exclude unwanted effects on the fetus due to the hormonal action of the active components.

Ethinyl estradiol/desogestrel can affect lactation: reduce the amount of milk and change its composition. Small amounts of contraceptive steroids and their metabolites can be excreted with milk. This can affect the baby. The use of Volnea during breastfeeding is contraindicated.

If a delay is less than 12 hours: take the pill right as soon as you remember, even if you have to take two tablets in one day. Take the rest of the tablets at the usual time.

If a delay is more than 12 hours: take the last of the missed tablets as soon as you remember. Check which of the tablets you missed:

Before you start taking birth control pills a woman should consult a specialist.

If you have any conditions/risk factors mentioned below, the benefits of taking the drug should be evaluated individually for each woman and discussed with a doctor.

The risk of venous thromboembolism associated with the use of Volnea is not established.

Epidemiological studies have also revealed a link between ethinyl estradiol/desogestrel intake and an increased risk of arterial thromboembolism.

In rare cases, women taking oral contraceptives experienced thrombosis of blood vessels. There is no data on the connection between these phenomena and the use of hormonal contraceptives.

Symptoms of venous or arterial thrombotic/thromboembolic conditions or acute disorders of cerebral circulation:

The presence of one serious risk factor for venous disease or several risk factors for artery disease can also be a contraindication. You should also consider the possibility of anticoagulant therapy. Women who use oral contraceptives should be properly instructed about the need to inform the doctor in case of suspicion of symptoms of thrombosis. In the event that thrombosis is suspected or confirmed, the use of birth control pills should be discontinued.

Other conditions that were accompanied by undesirable vascular disorders:

An increase in the frequency or severity of a migraine during Volnea intake may be an indication for the immediate withdrawal of combined oral contraceptives.

The most significant risk factor for developing cervical cancer is a persistent infection caused by the human papillomavirus (HPV). In epidemiological studies, long-term use of combined contraceptives containing ethinylestradiol has been shown to increase this risk, but it remains unclear to what extent this effect is related to other factors.

In rare cases, women who took combined oral contraceptives observed the development of benign liver tumors and even less often – malignant. In some cases, these tumors led to life-threatening intra-abdominal bleeding. If you have intense pain in the upper abdomen, an increase in the liver or symptoms of intra-abdominal bleeding, it is necessary to exclude liver tumor.

In women with hypertriglyceridemia or a corresponding family history, the risk of developing pancreatitis when taking combined oral contraceptives is increased.

In women with hereditary angioedema, exogenous estrogens can induce or enhance symptoms of edema.

In acute and chronic violations of liver function, it may be necessary to cancel combined oral contraceptives until the liver function is normalized.

In rare cases, women taking ethinyl estradiol/desogestrel contraceptives complained of chloasma. Women who are prone to chloasma should avoid exposure to sun and ultraviolet light while taking combined oral contraceptives.

Volnea tablets contain lactose monohydrate and anhydrous lactose. Patients with rare hereditary diseases, such as galactose intolerance, lactase deficiency, or glucose-galactose absorption impairment who follow a lactose-free diet, should not take this drug.

Allergic reactions may occur in women who are allergic to soy lecithin.

Before taking Volnea drug, you should exclude pregnancy and contraindications for use.

It is necessary to measure blood pressure and, in the presence of indications, conduct a physical examination taking into account contraindications and cautions. The interval between the control medical examinations is determined in each case individually, but not less than once in 6 months.

Women should be informed that combined oral contraceptives do not protect against HIV infection (AIDS) and other sexually transmitted diseases.

The effectiveness of the contraceptive may be reduced in the case of missing tablets, gastrointestinal disorders or undesirable drug interactions.

A woman may have acyclic bleeding, especially in the first months of admission. Therefore, any irregular bleeding should be assessed after a three-month adaptation period.

If acyclic bleeding recurs or begins after several regular periods, one should take into account the possibility of developing non-hormonal disorders and take measures to exclude pregnancy or cancer, including therapeutic and diagnostic curettage of the uterine cavity.

In some women, menstruation does not occur during the placebo phase. If Volnea was taken in accordance with the instructions for use, it is unlikely that a woman is pregnant. However, if the admission rules were violated before the first missed menstrual-like “withdrawal” bleeding, or if two bleedings are missed, pregnancy should be excluded before continuing hormonal contraception.

Use in liver function violations

Use in renal dysfunction

Influence on the ability to drive vehicles and manage mechanisms

Volnea does not affect the ability to drive vehicles and work with mechanisms.