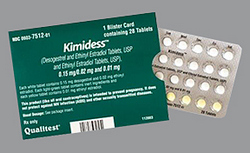 The use of Kimidess is indicated in women of childbearing age for oral contraception.

Kimidess is a combination oral contraceptive (COC). Its action is based on the interaction of various factors, including the change in cervical secretion and suppression of ovulation. In addition to contraceptive properties, the drug has a number of other actions that can be taken into account when choosing a method of contraception. Menstrual periods become more regular and less painful, which reduces the likelihood of developing iron deficiency anemia.

The tablets are taken orally with plenty of water. Take 1 tablet daily, always at the same time for 21 days, strictly following the specified order of priority on the blister. Begin taking tablets from the next blister as soon as the previous one is empty (even if the menstruation has not stopped).

When switching from another combined hormonal contraceptive, you should start taking Kimidess the day after the last active tablet of the previous drug was taken.

When switching from the transdermal patch or vaginal ring, Kimidess should be taken on the day of their removal, but not later than the proposed next application or the introduction of a new ring.

When switching from drugs, mini-pills can be taken on any day of the menstrual period.

When switching from progestagen-releasing intrauterine system or implant, mini-pills can be taken on the day they are removed,

When switching from injection contraception, the pills can be taken on the day of the next procedure.

Each of these transitions should be accompanied by the use of an additional barrier method of contraception during the first 7 days.

After an abortion in the first trimester, taking tablets should begin on the day of surgery without the use of additional contraception.

You can start using Kimidess 21-28 days after an abortion in the second trimester or delivery. If the use is started in a later period, the first 7 days should be supplemented with non-oral contraceptives. If a woman had sexual intercourse after an abortion or childbirth, she should exclude pregnancy before using Kimidess or postpone its use until the first menstruation.

In some cases, Kimidess can cause the following side effects:

Do not use Kimidess contraceptive if you have any of the following conditions:

If these pathologies develop during the period of Kimidess use, the drug must be canceled.

If you need to use other medicines together with this contraceptive, you should first get a doctor’s consultation to avoid a decrease in the drug’s contraceptive effectiveness and the development of unwanted side effects.

Possible Kimidess interactions with other drugs:

Kimidess is contraindicated in pregnancy. The intake of oral contraceptives, which preceded pregnancy, does not increase the risk of various fetal defects. Unintentional use of hormonal contraceptives in the early stages of pregnancy does not have a teratogenic or mutagenic effect, does not affect the sex of the fetus. When pregnancy is established or suspected, the drug should be canceled.

If you are planning a pregnancy, the medication should be discontinued 3 months before the intended date of conception.

If you need no scheduled menstrual bleeding, you need to exclude pregnancy.

The drug is contraindicated during breastfeeding. If you need to use the drug during this period, you should stop breastfeeding. Ethinyl estradiol and desogestrel suppress lactation and affect the quality of milk. A small amount of active substances can be excreted in breast milk.

Delay in taking a dose of Kimidess can reduce the effectiveness of contraception. If a delay is less than 12 hours and the woman took the pill in this time interval, contraception is not violated, the use should be continued as usual. If a delay exceeds 12 hours, the following rules should be followed:

The use of birth control pills should be started only after consultation with a gynecologist, who will weigh the desired effect and the possible risk of the therapy.

A doctor should prescribe the drug on the basis of a detailed medical history and conduct a thorough examination based on common practice, including the measurement of blood pressure, examination of the abdominal cavity organs, mammary glands and pelvis (including cervical examination). A doctor may recommend additional examinations. During oral contraception, such examinations should be conducted at least once every 6 months.

The patient should be informed about the need to seek immediate medical attention if his condition worsens or when signs of risk factors appear.

A woman should know that Kimidess tablets can increase the risk of developing venous and arterial thrombotic and thromboembolic pathologies, such as deep vein thrombosis, myocardial infarction, pulmonary embolism, stroke, sometimes with a fatal outcome. These diseases occur extremely rarely and often in the first year of taking combined oral contraceptives.

If you develop thrombosis or have symptoms of cerebrovascular disorders, you need to stop taking contraceptive tablets.

Consider the possible impact of the prolonged use of the drug on the increased risk of cervical and breast cancer.

With hypertriglyceridemia, including a family history, there is a risk of developing pancreatitis.

With the development of persistent arterial hypertension on the background of hormonal contraception, Kimidess should be canceled and hypertension therapy should be prescribed.

You can resume oral contraception only after reaching a normal stable blood pressure.

In case of recurrence of cholestatic jaundice, acute or chronic functional disorders, the drug should be canceled before the liver function is normalized.

The contraceptive effect of the preparation can be disturbed by missing tablets, gastrointestinal disorders, or combined use of certain medicines.

If you have a continuing irregular bleeding, you need to exclude pregnancy and tumors. For this, it is necessary to conduct appropriate studies, which may include diagnostic scraping.

If you have no menstrual bleeding, you need to see a doctor to exclude pregnancy.

The drug does not protect against sexually transmitted infections (including HIV (AIDS).

Hormonal contraceptives can influence the results of laboratory tests (the changes are usually within the limits of normal values).

Each tablet contains a small amount of lactose. The drug represents an unlikely threat of complications in women with lactose intolerance.

The use of Kimidess does not affect the ability of a patient to drive vehicles and work with mechanisms.

The drug is not prescribed for patients under the age of 18 since its safety and effectiveness in adolescent girls have not been studied.