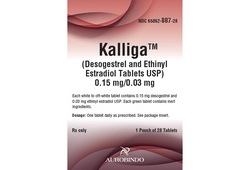 Kalliga is a birth control pill which contains 2 hormones, desogestrel and ethinyl estradiol. The drug is used to prevent unwanted pregnancy.

The drug reduces gonadotropin production and suppresses ovulation. It also increases the viscosity of the cervical mucus, making it difficult for sperm to move along the cervical canal, and the state of the endometrium changes, preventing implantation of a fertilized egg into the uterine wall.

Regular intake of Kalliga for at least 3 months reduces the symptoms of premenstrual syndrome (PMS), eliminates chest pains shortly before menstruation and abdominal pain during menstruation. The medication can be recommended for girls who have an irregular menstrual cycle.

Besides, long-term use of the drug reduces the risk of hormonal disorders (mastopathy), endometriosis, cancer (ovarian cancer, uterine cancer).

The first pill should be taken on day 1 of your menstrual cycle (that is, on the first day of your period). In this case, the pills act immediately and you do not have to use additional contraceptives.

If you start taking birth control pills on the day 2-5 of menstruation, the contraceptive effect will come only after 7 days of daily intake. Condoms should be used for the first 7 days.

It is recommended to take tablets daily at the same time (no matter what time of day). So the effect of the tablets will be the highest.

All active pills of Kalliga contain the same dose of hormones, so if you mix up the pills, nothing terrible will happen. The main thing is to take one tablet once a day.

After you start taking 7 inert tablets, menstrual-like bleeding (menstruation) should be expected.

During the 7 no-hormone days, there is no need to use additional contraceptives.

Regardless of whether you had menstruation, you need to begin a pack without breaks.

Switching from another COC:

If the package of the previous oral contraceptives contained 28 pills, then you should start taking Kalliga on the day after you have taken all the pills from the previous blister.

Switching from a hormonal patch or a vaginal ring:

You can switch to Kalliga from other hormonal contraceptives. To do this, take the first pill on the day when the vaginal ring or hormonal patch is to be removed, or on the day when you have to insert a new ring on a schedule or glue a new patch.

Switching from an intrauterine device (IUD):

You can take the first pill on the day you removed the intrauterine device. During the next week, it is recommended to use additional methods of contraception to avoid pregnancy.

Use after an abortion:

An overdose of desogestrel and ethinyl estradiol can cause a severe headache, dyspeptic symptoms and calf muscle cramps. There is no specific antidote, the treatment is symptomatic.

In some cases, Kalliga can cause the following side effects:

With prolonged use (extremely rare), combination oral contraceptives may cause chloasma, hepatocellular adenoma.

Simultaneous use of Kalliga with drugs that induce hepatic enzymes (barbiturates, hydantoin, primidone, rifampicin, carbamazepine, topiramate, griseofulvin, oxcarbazepine, felbamate, St. John’s wort medication, topiramate, griseofulvin) reduces the effectiveness of contraception and increases the risk of rashes. The maximum degree of induction of any of these drugs is achieved after 2-3 weeks of use but can last up to 4 weeks after discontinuation of the drug.

Since tetracycline and ampicillin reduce the effectiveness of combination oral contraceptives, it is necessary to use additional barrier methods of contraception when they are combined with Kalliga during the entire period of therapy and 7 (for rifampicin – 28) days after their cancellation.

The contraceptive can reduce the tolerance to carbohydrates, increase the need for oral antidiabetic agents or insulin.

The drug is not used during pregnancy and breastfeeding.

If you get pregnant when on the pills, stop taking the drug immediately and consult your doctor. As a rule, birth control pills do not affect the development of the fetus, so there is no need to have an abortion. If you plan to keep the pregnancy, you need to start taking folic acid as soon as possible.

If you forgot to take a pill in a timely manner and the delay is less than 12 hours, you just need to take the missed pill and continue taking the drug at your usual time. If the delay exceeds 12 hours, the reliability of contraception in this cycle is not guaranteed and the use of additional methods of contraception is recommended.

When missing one tablet on the 1st or 2nd week of the cycle, it is necessary to take 2 tablets the next day and then continue regular intake, using additional contraceptive methods until the end of the cycle.

When you skip a pill on the 3rd week of the cycle, you must take the missed pill, continue taking the drug regularly and discard 7 inert tablets. It is important to remember that missing an active tablet of Kalliga increases the risk of ovulation and / or bleeding and therefore, additional contraceptive methods are recommended.

Kalliga is a reliable means of hormonal contraception.

Use of the drug should be started after a complete general medical and gynecological examination, including a detailed personal and family history, laboratory tests, measurement of blood pressure, examination of the pelvic organs, mammary glands, cytological analysis of cervical smear. Conclusion about the possibility of using the drug is made by a gynecologist on the basis of this data. After informing the patient about the possible negative effects and benefits of hormonal contraception, the doctor gives her the right to make a final decision.

When using birth control pills, examination by a gynecologist and careful individual health monitoring should be regular (at least 2 times a year).

A woman should know that the reason for the immediate cancellation of the drug is the appearance of one of the following deviations: diseases or conditions that contribute to renal, cardiovascular insufficiency; deviations in laboratory tests assessing the liver function; pathology of the hemostasis system; migraine; epilepsy; gynecological diseases or estrogen-dependent neoplasm; severe depression; diabetes without vascular complications; sickle cell anemia.

While taking oral hormonal contraceptives, there is an increased risk of developing venous and arterial thromboembolic pathologies, especially in women over 35 years or with thromboembolic diseases in the family history (parents, sisters, brothers). The risk increases with intensive smoking, dyslipoproteinemia, obesity, diabetes mellitus with vascular lesions, valvular heart disease with hemodynamic disorders, arterial hypertension, atrial fibrillation, during prolonged immobilization associated with extensive surgical intervention (including surgery on the lower extremities) or after severe injury.

The use of contraceptive should be stopped 4 weeks before the planned operation and resume taking 2 weeks after remobilization. After birth, the likelihood of venous thromboembolic diseases increases.

Contraceptive use can be considered as one of the many risk factors for breast cancer. With long-term use of the drug, there were rare cases of the development of benign or malignant neoplasms of the liver. This should be taken into account in the differential diagnostic evaluation of abdominal pain, which may be associated with intraperitoneal bleeding or an increase in liver size. Women with this pathology in history during pregnancy are at risk of developing chloasma, so they are advised to avoid direct sunlight or ultraviolet radiation.

The effectiveness of the preparation may be affected by the simultaneous use of other drugs, in which case the use of additional barrier contraceptive methods is required.

The effect of the drug is reduced on the background of irregular spotting or breakthrough bleeding that appeared several months of using the contraceptive. In this case, it is necessary to continue taking the pills until the end of the next cycle. If you have no menstrual-like bleeding after taking 7 inert tablets, stop taking the pills until pregnancy is excluded.

The action of tablets can cause a change in the laboratory indicators of the function of the kidneys, adrenal glands, liver, thyroid gland, the level of transport proteins and lipoproteins, hemostasis indicators.

After acute viral hepatitis, the use of the drug can be started after the complete restoration of liver function (6 months or more).

Kalliga does not protect against sexually transmitted diseases, including HIV infection (AIDS).

The effect of the drug does not affect the ability to drive vehicles and work with mechanisms.

The contraceptive effect of the medication can be reduced by vomiting, diarrhea, large doses of alcohol, certain medications.

Spotting while taking birth control pills is sometimes normal. For example, such secretions do not cause concern if you just started taking pills (the first or second pack), in the middle of the package and in the first few days after the start of the next pack.

If you missed pills before the appearance of brown secretions, the contraceptive effect of the preparation may be reduced, which means you should use condoms in case of sexual intercourse.

In some situations, spotting while taking Kalliga may indicate some diseases.

If you are planning to undergo an operation, you must stop taking the tablets at least 4 weeks before the surgery. If the operation is urgent, you must tell your doctor that you are taking birth control pills. Desogestrel and ethinyl estradiol thicken the blood, contributing to the formation of blood clots. If your doctor knows about taking birth control pills, he will give you blood thinners.