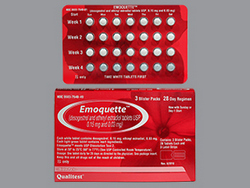 Emoquette is a combination hormone contraceptive which is used to prevent pregnancy. The drug contains 2 hormones: desogestrel and ethinyl estradiol.

The main indication for the use of Emoquette oral contraceptive is to prevent unwanted pregnancy. But there are a number of other factors in which the drug is recommended for use:

It is recommended to start the medicine only after consulting a gynecologist. Do not engage in self-treatment.

The effect of Emoquette is related to the mechanism of action: the active ingredients, ethinyl estradiol and desogestrel, block the release of factors of luteinizing and follicle-stimulating hormones of the hypothalamus, oppression of the pituitary gland by gonadotropic hormones. This leads to inhibition of maturation and release of the ovum (ovulation). Ethinyl estradiol retains a high viscosity of the cervical mucus, which makes it difficult for sperm to enter the uterine membrane. In addition to the contraceptive effect, the drug can normalize the menstrual period by replenishing the level of endogenous hormones with constituents.

In addition, Emoquette tablets have the following positive effects on the female body:

The drug is taken at the same time every evening. Tablets are swallowed whole, not chewed, washed down with water. Take 1 pill every day for 28 days. For your convenience, the blister indicates the days of the week. So a woman controls the use of the medicine on a daily basis and does not allow breaks. You can take birth control pills as long as contraception is needed.

If there is no menstrual bleeding during the expected time, this may indicate a pregnancy. Before the new course, you need to make sure that you are not pregnant, and only then continue taking the pills.

When switching from another contraceptive, the regimen does not change.

After an abortion, start taking the pills the same day or next day after the procedure.

After delivery, you can take the medication only if you do not breastfeed.

How to take Emoquette for the first time? If the woman is just starting treatment with this contraceptive, she should take 1 tablet on the first day of her period.

Emoquette is a low-toxic drug, cases of overdose are unknown. But if a woman took a dose of medication that exceeds the therapeutic rate several times, unpleasant symptoms can arise including dizziness, nausea and vomiting. Girls can observe bloody discharge, similar to the menstrual bleeding.

If you have such symptoms, measures must be taken to suppress them.

This means for contraception can also affect the mood of women.

In the presence of diseases that are contraindications to Emoquette, the use of birth control pills must be discontinued. These include:

In rare cases, Emoquette can cause side effects:

If you have one of the side effects, you should decide whether to use this contraceptive.

There are a number of medications that depress Emoquette’s contraceptive effect. The combined reception of these drugs can cause heavy bleeding and serious violations in the work of the female reproductive system. These drugs include:

Birth control pills do not have the desired effect when combined with penicillin, tetracycline, chloramphenicol, neomycin and laxatives.

Emoquette can also lower the therapeutic effect of certain medicines:

The use of Emoquette during pregnancy and during breastfeeding is contraindicated.

During the period of breastfeeding, it is necessary to decide whether to discontinue using the drug or stop breastfeeding.

Product
Friday, November 6, 2020
★☆☆☆☆
“ I have never had any issues with a pill like i have had with EMOQUETTE. It's supposed to be a generic form of reclipsen and it is the total OPPOSITE! My periods last 14 days straight (never had that happen to me on reclipsen), My sex drive no longer exists, I'm constantly falling asleep, I'm so nauseous i can't eat certain foods anymore. I'm constantly crying or sad no matter what. Whether its a movie i'm watching, or just feeling overwhelmed with regular house work or school i get so upset. I just started to develop head aches recently and I don't know if it's because of the pill but im constantly drinking water. I've been period free for five days and IT STARTED UP AGAIN!!! DO NOT RECCOMEND this pill to anybody.”
- emily
Product
Friday, November 15, 2019
★☆☆☆☆
“ I have been taking Emoquette for a year. It made my periods regular but caused acne, nausea, and pains during menstruation. Soon I will switch to another birth control. I think different bodies react differently to this pill. Maybe it will work out for you!”
- Gabriella
Product
Sunday, November 3, 2019
★★★★★
“ I switched to Emoquette because of hair loss. I'm very satisfied with this birth control pill. I have no side effects which I had on the previous pill. I also have my hair has become better. I am very happy!”
- Millie
Product
Sunday, October 13, 2019
★★★★★
“ Emoquette is definitely one you need to buy if you are going to need it for birth control. I've been using it for 9 months. No issues.”
- Abbie
Product
Sunday, September 29, 2019
★★★★★
“ When I first started Emoquette I got so sick! But my doctor explained that I have to eat before taking this, so do not take on an empty stomach! This pill improved my acne. And I would definitely recommend this pill to women who want to gain a few pounds! No depression, mood swings or something like that. My period lasts from 3 to 5 days, no pain, good sex drive!”
- Daisy
Product
Sunday, September 1, 2019
★☆☆☆☆
“ Emoquette gave me headaches, dizziness, nausea, fatigue, and extreme mood swings. I took it for 3 months, thinking it would get better soon but it didn't. Don't recommend this pill”
- Camilla