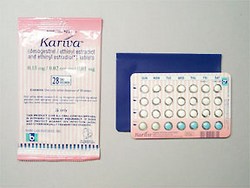 The drug is prescribed as a means of contraception.

Kariva is a combined oral birth control whose main contraceptive effect lies in the inhibition of gonadotropin synthesis and ovulation suppression. Additionally, by increasing the cervical mucus viscosity, the movement of spermatozoa through the cervical canal slows down. As a result, a change in the endometrium prevents the fertilized egg implantation. This birth control preparation has a beneficial effect on lipid metabolism increasing the concentration of high-density lipoprotein (HDL) in blood plasma, without influence on the content of low-density lipoprotein (LDL). On the background of Kariva use, there appears a significant decrease in the amount of monthly lost blood (with the initial menorrhagia), the menstrual cycle is normalized, and a favorable effect on the skin is noted (especially with acne vulgaris).

For an oral administration. Kariva is taken from the first day of the menstrual cycle. The regimen includes 1 tablet a day for 28 days necessary at the same time. After taking the last pill from the package. There is no need to make a 7-day break. The drug should be taken even if the menstruation starts.

The first pill should be taken on the first day of the menstrual cycle. In this case, no additional methods of contraception are recommended. You can start taking pills from the 2nd-5th day of menstruation, but in this case, in the first cycle of using the drug, you need to get additional contraceptive methods in the first 7 days of taking the birth control pills.

If more than 5 days have passed since the onset of menstruation, the start of application should be postponed until the next menstruation.

Non-breastfeeding women can start taking pills no earlier than 21 days after labor, after consulting a doctor. In this case, there is no need to use additional contraceptive methods.

If after the birth had already had sexual contact, the pills may be taken after the first menstruation starts.

If a decision is made to take the drug later than 21 days after the birth, then in the first 7 days it is necessary to use additional methods of contraception.

After an abortion, in the absence of contraindications, the taking of tablets should begin from the first day, and in this case, there is no need for additional methods of contraception.

Side effects, the appearance of which requires an immediate discontinuation of the drug:

Rare side effects caused by Kariva are:

Very rare side effects are:

There are other side effects, less severe, but more frequent. The viability of continuing Kariva use is decided individually after consultation, based on the benefit/risk ratio.

Drugs that induce hepatic enzymes such as hydantoin, barbiturates, primidone, carbamazepine, rifampicin, oxcarbazepine, topiramate, felbamate, griseofulvin, and medicines containing St. John’s wort reduce the effectiveness of oral contraceptives and increase the risk of breakthrough bleeding. The maximum level of induction is usually achieved no earlier than 2-3 weeks but can last up to 4 weeks after drug discontinuation. Ampicillin, tetracycline may reduce the contraceptive effectiveness. It is recommended to use an additional barrier method of contraception throughout the course of treatment and for 7 days (for rifampicin – within 28 days) after drug withdrawal.

Oral contraceptives can reduce tolerance to carbohydrates, increase the need for insulin or oral antidiabetics.

If the woman forgot to take Kariva pill on time, and no more than 12 hours have passed, a woman just needs to take a skipped pill, and then continue the reception at the usual time. If more than 12 hours have passed between taking the tablets – this is considered a missing tablet, contraceptive reliability is not guaranteed, and additional contraceptive methods are recommended. If you miss one tablet on the first or second week of the cycle, you need to take 2 tablets the next day and then continue a regular application, using additional contraceptive methods until the end of the cycle.

If you miss a pill on the 3rd week of the cycle, you must take a skipped pill, continue a regular intake without breaks.

It is important to remember that in connection with the minimal dose of estrogen, the risk of ovulation and/or bleeding is increased when a pill is missed and therefore additional methods of contraception are recommended.

The drug use during pregnancy and breastfeeding is contraindicated. During the period of breastfeeding, it is necessary to decide whether to withdraw the drug or stop breastfeeding.