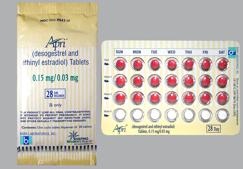 The contraceptive effect of desogestrel + ethinyl estradiol combination is based on the interaction of various factors, the most important of which are suppression of ovulation and a change in the secretion of cervical mucus.

The estrogen component ethinyl estradiol is a synthetic analogue of the follicular hormone estradiol, which regulates the menstrual cycle.

In addition to contraceptive properties, Apri has a number of effects that can be taken into account when choosing a method of contraception. The drug makes menstruations more regular and less painful.

To ensure effective and safe treatment results, Apri should be used strictly as directed by the physician. The standard dosage is 1 tablet once a day. Individual dosage is selected depending on the patient’s health status and the severity of the symptoms. Tablets should be taken with a full glass of water and can be taken on an empty stomach. In case of stomach upset, it is recommended to take a pill after a meal or a snack. Do not divide or chew tablets, as this may alter the effect of the drug.

The first pill should be taken on the first day of the menstrual period. In this case, you do not need to use additional methods of contraception. Tablets can be taken with the 2nd-5th day of menstruation, but in this case, additional contraceptive methods should be used in the first 7 days of taking the tablets. If more than 5 days have passed after the onset of menstruation, it is necessary to postpone the start of Apri drug until the next menstruation.

Taking the drug after childbirth:

Taking the drug after an abortion:

After an abortion, start taking the pills from the first day. There is no need to apply additional methods of contraception.

Switching to Apri from after another oral contraceptive (21 or 22 or 28-day drug):

The first tablet should be taken the next day after the end of the course of the previous drug. You do not need to make a break or wait for the menstruation. There is no need to apply additional methods of contraception.

Switching to Apri from after progestogen-only “mini-pills”:

The first tablet must be taken on the first day of the cycle. There is no need to apply additional methods of contraception.

If you need to delay menstruation, start taking active tablets from the new package, without taking 7 no-medication pills. Breakthrough and spotting bleeding may occur, but this does not reduce the contraceptive effect of the drug. Regular reception of Apri can be resumed after an ordinary 7-day break.

After taking large doses of the contraceptive, such symptoms of an overdose can occur: a severe headache, dyspeptic disorders, convulsions of the calf muscles.

Treatment: if an overdose is observed in the first 2-3 hours or a large number of tablets have been taken, it is necessary to rinse the stomach. The drug does not have a specific antidote, the treatment is symptomatic.

A woman taking Apri needs to be carefully monitored. If any of the following conditions are aggravated or manifested during the use of the birth control pills, stop taking the drug and choose another, non-hormonal method of contraception.

In the presence of any of the following conditions, in each case, the benefits or possible negative effects of taking Apri pills are individually assessed:

Apri contraceptive may cause the following side effects:

You may not worry if you have missed an inert pill since it contains no hormones.

If you forgot to take an active pill on time and no more than 12 hours passed, you just need to take the missed pill and then continue to take them at your usual time. If more than 12 hours have elapsed between doses, this is considered a missed tablet. Contraceptive reliability is not guaranteed in this cycle.

It is important to remember that missing a pill of Apri may increase risks of ovulation and/or bleeding, therefore it is recommended to apply additional methods of contraception.

Apri is contraindicated for use in pregnancy. You should stop using the drug 3 months before the planned pregnancy. In case of unexpected pregnancy, the drug should be canceled.

Epidemiological studies have shown that the incidence of developmental malformations does not increase in children born to women who took hormonal contraceptives like Apri before pregnancy. If a woman uses the drug in the early stages of pregnancy, a teratogenic effect is not revealed.

The use of oral contraceptive is contraindicated during breastfeeding, because it reduces the secretion of breast milk, changes its composition. In addition, small amounts of active substances, desogestrel and ethinyl estradiol, are excreted in breast milk.

Before using Apri contraceptive, it is necessary to undergo general medical (detailed family and personal history, measurement of blood pressure, laboratory tests) and gynecological examination (including examination of mammary glands, pelvic organs, cytological analysis of cervical smear). Such a study is carried out regularly, every 6 months.

The effectiveness of the drug is reduced in case of missing tablets, with vomiting and diarrhea, as well as with the simultaneous use of other medicines.

The efficacy of Apri can be reduced if intermenstrual bleeding occurs after a few months of its use. If menstrual bleeding does not appear within the expected time, the use of the drug can be continued only after the exclusion of pregnancy.

The risk of arterial or venous thromboembolic disease increases with age, with smoking, with a history of thromboembolic disease, obesity (body mass index above 30 kg / m 2), with hypertension, heart valve disease, fibrillation atria, with diabetes, with prolonged immobilization (after a large surgical intervention, after surgery on the lower limbs, after a serious injury).

Impaired renal function: With caution and only after a thorough evaluation of the benefits and risks of use.

Influence on the ability to drive vehicles and control mechanisms: no data.

Product
Tuesday, February 16, 2021
★★★☆☆
“ I like this Apri brith control pill! I was quite surprised reading all these negative reviews. I realized every single woman has a personal experience with Apri, and is affected everyone in a different way. Personally, I’ve had no problems although it’s only been a few weeks of its intake. My mood swings (from when I was BC free) have gone down dramatically. I feel much more chilled out and content. No cramping, headaches, etc. but slight anxiety. I have noticed a little weight gain but this is not dramatic for me. Initially I was holding depo which made me bleed everyday straight for 3 months and suffered from pains from time to time.”
- Lisa Wilcox
Product
Sunday, January 24, 2021
★☆☆☆☆
“ I had normal, regular, unpainful periods before putting on Apri. Over the course of 2.5 years of taking it I gained 50 pounds even with regular exercise and dieting even though I struggled to gain even 5 pounds before starting Apri. I did not feel like myself emotionally. I finally had enough and decided to withdraw it and the weight never went away even with continued diet and exercise. Most importantly: MY PERIODS NEVER CAME BACK. I started growing dark, thick hairs on my neck, chest, and stomach that also never went away.”
- Barbara McMillan