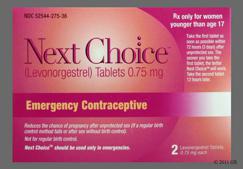 Next Choice is an emergency contraception. The main component – levonorgestrel – aims at preventing unwanted pregnancy in case of unprotected sexual intercourse.

Next Choice can be applied in some cases after sexual intercourse. The list includes the following conditions:

Next Choice is comprised of levonorgestrel – a synthetic derivative of the hormone testosterone. Its main action is a suppression of the ovulation process. As clinical trials display, a pill intake decreases the risk of pregnancy at least for 50%, and if you apply Next Choice within the first 24 hours, then generally the percentage of protection from an unwanted pregnancy is increased up to 95%.

A single intake of 0.75 mg of the drug ensures the maximum concentration of the substance in the blood after 1-3 hours. The synthetic hormone has a high degree of binding to plasma proteins – about 55%.

This birth control drug metabolism occurs in the hepatic tissues. The result lies in the pharmacologically inactive metabolites’ formation. The half-life is approximately 24 hours. The medicine is excreted in the form of inactive metabolites with urine and insignificantly – with caloric masses.

Next Choice contains 2 pills in a package. The first pill should be taken within 48 hours, and then after 12 hours – the second pill is mandatory for an intake. The drug can be used on any day of the menstrual cycle. Tablets are taken orally regardless of food intake.

A woman should avoid repeated Next Choice use orally within the same menstrual cycle because of the possibility of menstrual function disorders. Do not use an oral form as a means of regular and continuous contraception. Such a continuous application leads to a reduction in the drug effectiveness and the increase in adverse reactions. If menstruation is delayed more than 5-7 days after emergency contraception, the diagnosis of pregnancy should be excluded or confirmed. Moreover, in the case of uterine hemorrhages, a gynecological examination is recommended.

In adolescents under 16 years of age, emergency contraception is possible only in exceptional cases (including in the case of rape) and only after consulting a gynecologist.

The results of some recent studies show that in women taking contraceptives containing only progestin, an increased risk of venous thrombosis is possible. However, these results are not sufficiently determined. However, when symptoms of venous thrombosis appear, immediate appropriate diagnostic and treatment measures should be taken.

In clinical trials, the most common women who took levonorgestrel orally (0.75 mg) were:

With the simultaneous administration of inducers of cytochrome P450 isoenzymes, the levonorgestrel metabolism may increase and the effect may reduce.

The effectiveness of hypoglycemic drugs and anticoagulants (coumarin derivatives, phenyndion) is reduced by Levonorgestrel.

Levonorgestrel and medications containing this synthetic element may become riskful as the toxicity of cyclosporine may be increased due to the metabolism suppression.

Next Choice and pregnancy

Next Choice does not cause abortion if the pregnancy has been already diagnosed. Moreover, they do not harm either the pregnant woman or the fetus. This fact was proved by trials. The trials were conducted with the help of women who became pregnant when taking levonorgestrel, or who used it accidentally after the pregnancy onset.