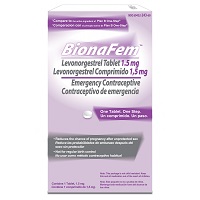 Emergency (postcoital) contraception (after unprotected sexual intercourse or the unreliability of the contraceptive method used).

BionaFem is a synthetic progestogen with a contraceptive effect. It has pronounced progestational and antiestrogenic properties. With the recommended dosage regimen, levonorgestrel suppresses ovulation and fertilization if sexual contact occurred in the pre-ovulation phase, when the possibility of fertilization is greatest. It can also cause changes in the endometrium that prevent implantation. The drug is not effective if implantation has already occurred.

BionaFem is taken orally at 1.5 mg (1 tab.) as soon as possible, but no later than 72 hours after unprotected intercourse (the effectiveness of emergency contraception with delayed use of the drug is significantly reduced). If vomiting occurs within 3 hours after administration, this emergency contraceptive should be taken again at a dose of 1.5 mg (1 tab.). The drug can be used at any time of the menstrual cycle. In the case of an irregular menstrual cycle, pregnancy must be excluded. After taking this drug before the next menstruation, local barrier methods of contraception (for example, a condom) should be used. The use of the drug during repeated unprotected intercourse during one menstrual cycle is not recommended due to an increase in the frequency of acyclic spotting/bleeding.

Take BionaFem with caution in the following cases:

The simultaneous use of drugs-inducers of liver enzymes accelerates the levonorgestrel metabolism.

Levonorgestrel reduces the effectiveness of hypoglycemic and anticoagulant (coumarin derivatives, phenindione) drugs. It increases plasma concentrations of corticosteroids. Women taking these drugs should consult a doctor.

Drugs containing levonorgestrel may increase the risk of cyclosporin toxicity due to the suppression of its metabolism.

No date recorded. The drug contains only 1 pill that cannot be missed.

BionaFem is contraindicated in pregnancy. If pregnancy happens when using the emergency method of contraception, based on the available data, no adverse effect of the drug on the fetus was recorded. Levonorgestrel is excreted in breast milk. After taking the drug, breastfeeding should be discontinued for 24 hours.