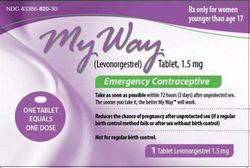 My Way is an emergency birth control pill containing a high dose of progestin (levonorgestrel) which prevents pregnancy if taken within 72 hours after unprotected sexual intercourse.

Emergency contraception in women with a regular menstrual period after unprotected sexual intercourse, and also in cases when the regular contraceptive method cannot be considered reliable. My Way drug is recommended for use as an alternative hormonal contraceptive in the following emergency situations:

My Way is a postcoital hormonal contraceptive for oral administration. It’s a synthetic progestogen with pronounced gestagenic and antiestrogenic properties. The drug causes inhibition of ovulation, changes in the endometrium, prevents the implantation of a fertilized egg, increases the viscosity of cervical mucus, which prevents the progress of sperm.

The drug is taken orally in the first 72 hours after unprotected intercourse.

To achieve a more reliable effect, the tablet should be taken as soon as possible after unprotected sex (within 24 hours).

If you have vomiting or diarrhea within 3 hours after taking a morning-after pill, the same dose of levonorgestrel should be taken.

This contraceptive can be taken at any day of the period.

After taking the pill, it’s recommended to use barrier birth control methods until you have the next menstruation. It’s not recommended to use emergency contraceptive pills during one menstrual period (this may cause acyclic bleeding).

My Way can cause the following side effects:

My Way contraceptive has contraindications for use. They include:

A relative contraindication: the age under 16.

Barbiturates (including primidone), phenytoin, carbamazepine, Hypericum perforatum, rifampicin, ritonavir, rifabutin, griseofulvin can reduce the contraceptive effects of My Way levonorgestrel pill. If you take or plan to take the mentioned drugs, who receive these drugs, you should consult a doctor.

Emergency contraceptive may cause an increase in the toxicity of cyclosporine due to the possible inhibition of cyclosporin metabolism.

Pregnant women should not use My Way pills. The drug does not cause termination of pregnancy.

In case of unsuccessful use of emergency contraception and the onset of pregnancy, the adverse effect of progestogens on the fetus was not revealed. There are no clinical data on the possible consequences of taking a dose of levonorgestrel exceeding 1.5 mg.

Levonorgestrel is excreted in breast milk. The potential impact of this substance on a baby may be reduced if a breastfeeding woman takes a morning-after pill immediately after feeding a baby, avoiding feeding after each intake of My Way medication for at least 8 hours.

After taking the drug, a gynecologist’s consultation is mandatory for three weeks.

Overdose may increase side effects. There is no antidote. Gastric lavage and symptomatic treatment are recommended.

A morning-after pill is not taken more than once every 3 months, otherwise, the hormonal background of the woman will be disrupted and this will lead to menstrual irregularities and even infertility.

This birth control method can be used in emergency circumstances, it cannot be used as a regular contraception.

The effectiveness of the drug decreases over time.

If you do not remember the time of unprotected sex, or more than 72 hours elapsed, there is a possibility that conception has already occurred. In this regard, the use of a morning-after pill may be ineffective in preventing pregnancy.

If the menstrual period is delayed for more than 5 days or you have unusual bleeding on the day of expected menstruation, it is necessary to exclude pregnancy.

The nature of bleeding may vary slightly but in most women, the next menstruation begins within 5-7 days from the estimated time.

The use of a levonorgestrel 1.5 pill is not recommended for women with severe impairment of liver function.

The effectiveness of My Way may be reduced by severe malabsorption syndromes, for example, Crohn’s disease. Women with these diseases should consult a doctor if they need an emergency contraception.

This birth control tablet contains lactose monohydrate, so if you have rare hereditary disorders of tolerance to galactose, you should not use this drug.

Emergency contraception does not protect a woman from sexually transmitted diseases.

The drug is not recommended for use in children under the age of 16 without a doctor’s supervision since the data on women under this age is extremely limited.

The ability to drive vehicles and work with other mechanisms:

The effect of My Way on the ability to drive vehicles and work with mechanisms has not been investigated but a woman should not exclude the possibility of dizziness.