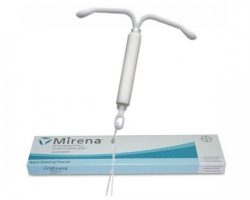 Mirena is a T-shaped intrauterine contraceptive device (also known as an IUD) inserted into the uterus and containing the levonorgestrel hormone. Every day the device releases a certain small dose of a hormone into the uterus cavity. The hormone acts only within the uterus and is practically not absorbed into the blood. This significantly reduces the risk of side effects of hormonal preparations. The preparation does not suppress the ovaries and provides a curative effect, which we will discuss below.

Mirena IUD is inserted to prevent unwanted pregnancy. In addition, the device is used for very severe menstrual bleeding for an unclear reason. As a gestagenic topical agent, the intrauterine device is used to prevent endometrial hyperplasia, for example, in a severely leaking climax or after bilateral ovariotomy.

Mirena is sometimes used in the therapy of menorrhagia if there are no hyperplastic processes in the uterine mucosa or extragenital pathologies with pronounced hypercoagulation (thrombocytopenia, Willebrand disease).

The principle of the hormonal device is similar to the action of combined oral contraceptives, hormonal implants and contraceptive injections. Levonorgestrel blocks the ovulation (the release of the egg from the ovary) and delays the development of the mucous membrane of the uterus, thereby making it difficult to implant the fetal egg.

Mirena contains 52 mg of levonorgestrel. The device is inserted into the uterine cavity and remains effective for 5 years.

Mirena can be used in women receiving hormone replacement therapy, in combination with oral or transdermal estrogen preparations that do not contain progestins.

Mirena should be used with caution in the conditions listed below (only after a consultation with a specialist). You should discuss the expediency of removing the device if you have any of the following conditions:

There are several side effects of Mirena, which are observed in almost every tenth woman. They include:

All the above signs are most clearly manifested in the first months of using Mirena IUD. Over time, their intensity decreases, and, as a rule, uncomfortable symptoms pass without a trace.

The metabolism of levonorgestrel can be enhanced by the simultaneous use of substances that are inducers of enzymes, especially cytochrome P450 isoenzymes involved in the metabolism of drugs, such as anticonvulsants (for example, phenobarbital, phenytoin, carbamazepine) and agents for the treatment of infections (eg rifampicin, rifabutin, nevirapine , efavirenz). It is unknown whether these drugs change the effectiveness of Mirena but probably this interaction is not dangerous since the contraception device has mainly a local action. Avoid excessive alcohol doses since they may reduce the contraceptive effect. Do not use Mirena if you smoke cigarettes. Smoking increases the risk of serious cardiovascular side effects from contraceptive pills, including heart attack, blood clots or stroke.

The use of Mirena is contraindicated in pregnancy.

Pregnancy in women who have this device inserted is an extremely rare phenomenon. But if there was a loss of the IUD from the uterine cavity, the woman is no longer protected from pregnancy and should use other methods of contraception before consulting a doctor.

Some women have no menstrual bleeding during the use of Mirena. The absence of menses is not necessarily a sign of pregnancy. If you do not have menstruation, and at the same time notice other signs of pregnancy (nausea, fatigue, tenderness of the mammary glands), you need to see a doctor for examination and do a pregnancy test.

If a woman gets pregnant during the use of Mirena IUD, it is recommended to remove the device since any intrauterine contraceptive increases the risk of spontaneous abortion, infection, or premature birth.