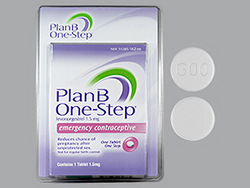 Plan B One-Step is recommended for use as an alternative hormonal contraceptive in the following emergency situations: with unprotected intercourse, if the contraceptive method used cannot be considered reliable (rupture, misalignment or misuse of the male condom, shearing, rupture or premature removal of the diaphragm or cervical plate, unsuccessful application of interrupted sexual intercourse method, erroneous calculation of ovulation days in case of the calendar method application, loss of an intrauterine contraceptive, missing 3 or more tablets when taking a hormonal oral contraceptive for continuous use), rape.

Plan B One-Step is not used as a regular method of contraception and should only be taken as an emergency contraceptive.

Before you take the medication, consult a doctor or a pharmacist since emergency contraception is not indicated to everyone.

Plan B One-Step is a synthetic progestogen with pronounced gestagenic and antiestrogenic properties. It causes inhibition of ovulation, changes in the endometrium, prevents the implantation of a fertilized egg, increases the viscosity of cervical mucus, which prevents the progress of sperm.

How to take Plan B One-Step?

Plan B One-Step has a one-dose regimen (1 pill) which contains 1,5 mg of levonorgestrel.

The drug can be used at any time of the menstrual period. In the case of an irregular menstrual cycle, you must first exclude pregnancy.

If you are less than 18 years of age, visit a doctor or gynecologist. You need a prescription for buying Plan B One-Step emergency contraception.

Open the package and take the pill as soon as possible with a small glass of water for rapid dissolution.

Consult your doctor if you vomit within two hours after taking the pill. There is a risk that the tablet did not have time to act on your system, so you should consult a doctor about whether you should take another dose of Plan B One-Step.

Start using another reliable contraceptive (low-hormonal oral contraceptives or condoms) so that you do not need emergency contraception in the future.

The use of the drug with repeated unprotected intercourse during one menstrual period is not recommended (due to increased frequency of acyclic bleeding).

Avoid overdose – do not take more than 1 pill of emergency contraception since an overdose of levonorgestrel can increase the severity of side effects. There is no specific antidote for levonorgestrel. Symptomatic therapy is required.

Do not take Plan B One-Step pill if you have any of the following contraindications:

With caution: diseases of the liver and biliary tract, jaundice (including in the anamnesis), Crohn’s disease, lactation.

Expect that you will experience mild nausea. This is a fairly common side effect of this drug and does not require medical intervention if you do not vomit within two hours after taking the pill.

Seek immediate medical attention if you experience rare but serious side effects such as abdominal pain, chest pain, blurred vision, speech problems, or yellowing of the skin and pupils. Some women experience delay of menstruation (no more than 5-7 days, if menstruation is delayed for a longer period, pregnancy should be excluded)

Preparations containing levonorgestrel may increase the risk of toxicity of cyclosporine due to the suppression of its metabolism.

Missing of a dose of Plan B One-Step increases the risk of becoming pregnant. Consult your gynecologist if you have missed a dose of the drug. The time of intake is very important for this contraceptive to be effective.

Plan B One-Step and pregnancy

The drug is contraindicated in pregnancy. If the pregnancy occurred when using this emergency method of contraception, then based on the available data, the adverse effect of the medicine on the fetus is not revealed.

Levonorgestrel is excreted in breast milk. After taking the preparation, breastfeeding should be stopped for 24 hours.

How long can I wait to take Plan B One-Step?

The sooner you take a pill, the more likely it will prevent pregnancy. Some people call such emergency contraceptive a “next day pill”. But it does not oblige you to wait until the next day. You can drink a tablet immediately or use it within 3 days after unprotected intercourse.

How often can I take Plan B One-Step?

This is not a regular method of contraception. Try to use it as rarely as possible, only in case of emergency. But never forget: this method has fewer side effects and health risks than abortive pills or medical abortion. So, this hormonal preparation should not be taken more than once during a single menstrual period. If it is used more than once during the menstrual period, it is likely to disrupt your menstrual cycle. Emergency contraception does not work as well as regular methods of contraception. Your doctor can tell you about long-term contraceptive methods that are more effective in protecting you from pregnancy.

Can I take Plan B One-Step if I’m already pregnant?

If you are already pregnant, the pill simply does not work, and besides, it may harm the fetus. If you think you are pregnant, contact your doctor as soon as possible. If you have already taken a pill after your last sex and now find yourself pregnant, do not take the drug again.

What should I do if I get sick after taking a pill?

How do I know if Plan B One-Step pill works?

You will understand that the tablet worked when you get the next menstruation and the period turns out to be normal.

When should I see a doctor?

The drug does not replace permanent methods of contraception. In most cases, it does not affect the nature of the menstrual period. However, acyclic bleeding may occur and menstruation may be delayed for several days. If your menstruation delays for more than 5-7 days and changes its nature (poor or abundant bleeding), you must exclude pregnancy. Pain in the lower abdomen, fainting can indicate an ectopic pregnancy.

Adolescents under 16 years in exceptional cases (including rape) need a consultation with a gynecologist to confirm pregnancy.

After emergency contraception, a gynecologist’s consultation is recommended to select the most acceptable method of permanent contraception.

Emergency contraception does not protect against sexually transmitted diseases.

The preparation may become less effective is a woman has disorders of the gastrointestinal tract (for example, Crohn’s disease),

The influence of Plan B One-Step on the ability to drive vehicles and mechanisms was not studied.

Emergency contraception does not prevent pregnancy in all cases.

If there are doubts about the time of unprotected intercourse or if more than 72 hours have elapsed since the unprotected contact during this same menstrual period, there is a possibility that conception has already occurred. In this regard, the use of emergency contraception with a second sexual intercourse may be ineffective in preventing pregnancy.

If pregnancy occurred after the use of Plan B One-Step, you should consider the possibility of an ectopic pregnancy. The absolute likelihood of ectopic pregnancy is low because this drug prevents ovulation and fertilization.

There are limited data that require further confirmation that the contraceptive effect of Plan B One-Step may decrease with increasing body weight or BMI. For all women, regardless of their body weight and BMI, emergency contraception should be taken as soon as possible after unprotected intercourse.

This drug contains lactose and should not be used in patients with rare hereditary disorders of tolerance to galactose, lactose intolerance or glucose-galactose malabsorption syndrome.

Levonorgestrel increases the possibility of menstrual irregularities and in some cases leads to earlier or later ovulation. These changes can affect the dates of the fertile period but there is no fertility data for long-term follow-up.

Plan B One-Step is not recommended for use in children. Data on women under the age of 16 are very limited.