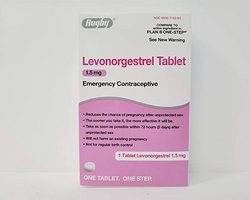 Rugby Levonorgestrel Tablet is an emergency contraceptive pill that is used to prevent pregnancy after unprotected sexual intercourse. It contains 1.5mg levonorgestrel ad is considered a cheaper alternative to Plan B that contains the same active ingredient.

Rugby Levonorgestrel Tablet is used in the following cases:

As a means of emergency contraception, Rugby Levonorgestrel Tablet does not have absolute contraindications for use and therefore is indicated for all women of reproductive age.

You should remember that emergency contraception is a one-time measure aimed at preventing unwanted pregnancy, and therefore it cannot be used constantly. It is also necessary to pay attention to the high pregnancy rate when using this method of contraception. At the same time, in certain situations, it is the only way to prevent an unwanted pregnancy and to avoid an abortion.

The tablet contains 1.5 mg of levonorgestrel, due to which it has a contraceptive effect: the probability of pregnancy is 1.1%. The drug suppresses ovulation and fertilization if sexual intercourse occurred in the preovulatory phase of the menstrual cycle, i.e. during the period of the greatest likelihood of fertilization. The drug does not have an abortive effect. If blastocyte implantation occurred prior to taking the pill, pregnancy can be maintained because the drug does not have a teratogenic effect.

Levonorgestrel does not significantly affect blood coagulation factors, the metabolism of fats and carbo-hydrates, subject to the recommended dosage regimen. The maximum concentration of levonorgestrel in blood serum after taking the tablet is reached after 2 hours. If sexual intercourse occurred in the preovulatory phase of menstruation, then levonorgestrel in the specified dose causes inhibition of ovula-tion. The drug also causes a regression of proliferative processes in the endometrium, preventing the im-plantation of blastocytes. Before taking this emergency contraceptive, pregnancy must be excluded.

When the tablet is taken more than 72 hours after intercourse, its effectiveness decreases.

The medicine can be used at any time of the menstrual cycle. If you have irregular periods, pregnancy must be excluded.

After taking Levonorgestrel Tablet, barrier methods of contraception (for example, a condom) should be used until you have the next period. The use of the drug with repeated unprotected intercourse during one menstrual cycle is not recommended due to an increase in the frequency of acyclic blood-spotted discharge / bleeding.

Emergency contraception is a one-time measure aimed at preventing an unwanted pregnancy, and therefore it cannot be used constantly.

After taking this contraceptive, medical monitoring of patients is required, which includes:

You should have your period within a week when you expect it + – 7 days. If your period has been delayed for more than 3-4 weeks after taking the levonorgestrel tablet, do a pregnancy test or a blood test for hCG and consult a doctor.

Severe adverse reactions after acute overdose of high doses of emergency contraceptives have not been described. Do not exceed the recommended dose! If you have an overdose, you can ex-perience nausea and breakthrough bleeding. There is no specific antidote, treatment should be symptomatic.

Rugby Levonorgestrel Tablet can cause side effects that appear in the first day and pass within 24 hours: swelling of the mammary glands, general weakness, dizziness. Nausea and vomiting are ob-served in very rare cases but if vomiting occurs within the first 3 hours after taking the drug, then you need to take a new dose of levonorgestrel 1.5 mg. If you have any severe and/or lasting adverse effects after taking this contraceptive, consult a doctor.

Do not use this medicine if you are under 16 years of age, if you are pregnant, have severe liver failure, lactose intolerance, lactase deficiency or glucose / galactose malabsorption, or hypersensitivity to the components of the drug.

Use the tablet with caution if you have diseases of the liver or biliary tract, Crohn’s disease, jaundice (including a history), or if you are breastfeeding.

If you are using any of the mentioned drugs, consult a doctor.

Emergency contraceptives based on levonorgestrel are contraindicated for use during pregnancy. It just makes no sense as such drugs are used to prevent pregnancy and not stop the existing one. However, if a pregnant woman takes this tablet, the drug is unlikely to affect the fetus.
Levonorgestrel is excreted in breast milk. Stop breastfeeding for 24 hours after taking the tablet.

The tablet should be taken as soon as possible but no later than 72 hours after unprotected intercourse. The effectiveness of emergency contraception is significantly reduced in this case.

This drug is intended solely for emergency contraception and does not replace regular con-traception. Repeated use of levonorgestrel 1.5 mg tablet during one menstrual cycle is not recommended.

If you have gastrointestinal disorders (for example, with Crohn’s disease), the effectiveness of the contraceptive may decrease.

The effect of the drug on the ability to drive vehicles and other mechanisms has not been studied.

Adolescent girls under 16 years of age can use this contraceptive only in exceptional cases (including rape). Before use, they need to consult a gynecologist.

Emergency contraception does not protect you and your partner from sexually transmitted dis-eases.