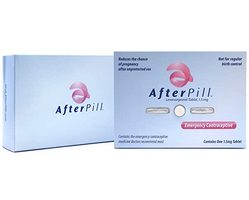 AfterPill is an emergency birth control pill that reduces the chance of pregnancy after unprotected sex. It contains 1.5mg levonorgestrel, the same medicine as Plan B.

AfterPill refers to emergency contraceptive methods that can be used to prevent pregnancy after sexual intercourse.

Emergency contraception may be used by any woman or girl of reproductive age. There are also no age limits for its use, however, there are some contraindications.

Levonorgestel – the active ingredient of AfterPill – delays the release of the egg from the ovary (prevents ovulation). The same hormone is used in many conventional contraceptives. The pill prevents pregnancy and is effective if you are not pregnant yet (within 3 days after sexual inter-course). If you are already pregnant, the pill will not harm your pregnancy. The sooner you take the pill after unprotected sex, the more effective it will be.

After using this pill, the menstrual period usually occurs within 1 week of the expected time. Some-times menstruation can occur earlier or later than usual. Bleeding may also be less or more abun-dant. Or you may have a slight spotting bleeding between your periods. In some cases, your period may be delayed for 1-5 days. If your period is delayed for more than 5 days, you need to consult a doctor.

The effectiveness of AfterPill depends on the number of hours that have passed since you had unprotected sex:

The pill should not be taken more than once during one menstrual cycle.

If you are already pregnant, then emergency contraceptive pills based on levonorgestrel will not work and will not harm either an already existing pregnancy or the fetus.

You will understand that the pill worked when your next period starts and it turns out to be normal.

If you think you are pregnant, see your doctor as soon as possible.

Serious adverse effects after acute overdose of large doses of levonorgestrel have not been re-ported. In case of an overdose, nausea and breakthrough bleeding can occur. There are no specific antidotes. treatment should be symptomatic.

To avoid an overdose, never take more than 1 pill of emergency contraception at once.

AfterPill is a safe way to prevent pregnancy within 72 hours after unsuccessful use of a contra-ceptive or unprotected intercourse, which has a low incidence of side effects.

If will unlikely have any serious or long-term side effects after taking the contraceptive pill. As a rule, you can continue your day in the usual way.

If you have any severe and/or long-lasting side effects after taking this medication, consult your doctor.

Do not take AfterPill if you have individual sensitivity to the components of the drug. It is not recommended to pre-scribe this pill to children under 16 years since the clinical experience with teenage girls under the age of 16 is insufficient.

It should be noted that this pill is a means of emergency contraception, therefore it is by no means suitable for regular use! Before use, it is necessary to read the instructions and determine the time elapsed since unprotected sex as accurately as possible.

If you are taking any of the mentioned drugs, you should seek medical advice before using emer-gency contraception.

Pregnant women should not use AfterPill. It will not cause interruption of pregnancy. According to limited epidemiological data, the drug does not have an undesirable effect on the fetus. At the same time, there are no clinical data on the possible consequences of taking levonorgestrel in doses of higher than 1.5 mg.

if there is a need for emergency contraception during lactation, you can use AfterPill. However, you should refrain from breastfeeding for 24 hours after taking the drug (levonorgestrel is practically not excreted in breast milk).

It is recommended to take this medicine only within 72 hours after unprotected intercourse. After this period, the effectiveness of this drug reduces significantly.

If you missed a pill within this period, consult a doctor im-mediately as you may be pregnant and may need other methods of preventing pregnancy that you cannot use at home.

The medicine will not protect you from HIV and other sexually transmitted diseases (STDs).

Levonorgestrel increases the possibility of menstrual irregularities, which in some cases leads to earlier or later ovulation. These changes can affect the dates of the fertile period, but there are no data on fertility with long-term follow-up.

AfterPill is not a regular method of contraception. Try to use it as rarely as possible, only in emergency cases. But never forget: this method has far fewer side effects and health risks than abortion pills or medical abortion.

Severe malabsorption syndromes, for example, Crohn’s disease, can have a negative effect on the effectiveness of levonorgestrel. If you are suffering from such diseases, consult a doctor.

The effect of levonorgestrel 1.5 mg on the ability to drive vehicles or work with mecha-nisms has not been investigated.