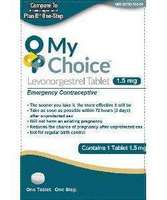 Use of My Choice levonorgestrel tablet is indicated for women with a regular menstrual period for emergency postcoital contraception. This drug is an alternative to traditional contraceptives.

Taking a tablet is recommended after unprotected sexual intercourse, as well as in cases when there are doubts about the reliability of using previously used contraceptives:

The drug is intended for women who have already started menstruating.

The main effect of My Choice contraceptive is gestagenic and antiestrogenic. Due to this, levonorgestrel suppresses the ovulation. When fertilization occurs in the pre-evolutionary phase, the probability of becoming pregnant is particularly high. In this case, the anti-estrogenic effect has a depressing effect on the egg cell, as a result, it dies.

The medication causes changes in the endometrium, which helps prevent implantation. The drug is ineffective if the implantation process has already begun.

My Choice tablet is intended for oral use. The result from its application will come only if you take the tablet in the next 72 hours after unprotected intercourse. If possible, take the pill within 12 hours.

The intake of the preparation is not associated with the last meal, nor with the phase of the menstrual period. The tablet is taken with water.

An overdose of a levonorgestrel 1.5 pill can intensify side effects. In case of an overdose, one should not be treated independently, the doctor should prescribe symptomatic therapy, which will eliminate the unpleasant consequences of using emergency contraception.

My Choice drug is contraindicated in the following diseases and conditions:

To avoid a decrease in the drug effectiveness, it is not recommended to use My Choice tablets in cases of concurrent administration of medicines used in the treatment of fungal infections and thromboses, or containing drugs conflicting with the active substance of the contraceptive, in particular, St. John’s Wort.

Levonorgestrel is a strong hormone, which can lead to the side effects listed below:

All these symptoms usually disappear after 12-48 hours. If this does not happen, you need to see a doctor.

There is a group of drugs that are not recommended to use together with My Choice pills. Otherwise, the effect of the drugs may reduce. These include hypoglycemic and anticoagulant drugs, glucocorticosteroids, as well as drugs that contain lansoprazole, nevirapine, oxcarbazepine, tacrolimus and some other components.

To avoid the wrong drug combination and not to harm your health, it is necessary to consult a doctor before using levonorgestrel emergency contraception.

Levonorgestrel penetrates into breast milk, so you should refrain from breastfeeding after taking the drug.

My Choice cannot be used as a regular contraceptive. Some women decide to use this drug constantly as it proved to be effective. This can cause serious damage to health and poses a threat of the impossibility to become pregnant in the future.

Emergency contraception does not protect a woman from sexually transmitted diseases. Therefore, if unprotected sexual intercourse posed the threat of infection, you need to see a doctor for diagnosis and testing.

The use of levonorgestrel 1.5 in children under the age of 16 is not recommended due to a lack of clinical experience but in some cases, the drug may be prescribed to girls under the age of 16. Only the doctor can do this after weighing all possible risks. After taking the medication, it is recommended to stay in the hospital under constant medical supervision for 24 hours.

A pregnancy that occurred against the background of using My Choice tablet may be ectopic, especially in women with pain in the lower abdomen, with fainting, the presence of ectopic pregnancy in the anamnesis, after surgery on the pelvic organs or their inflammation. Therefore, levonorgestrel 1.5 mg tablet is not recommended for women who have a risk of developing an ectopic pregnancy.

It is recommended to exclude pregnancy before applying the contraceptive. To do this, simply do a pregnancy test. There are cases when women took this birth control pill without knowing that they were pregnant, as a result of which the fetus died.

The preparation contains lactose. Patients with a rare hereditary intolerance to galactose, a deficiency of Sami lactase (Lappa), or a syndrome of malabsorption of glucose and galactose should not use the drug.

Studies on the possible impact on the ability to drive vehicles and work with mechanisms have not been conducted.