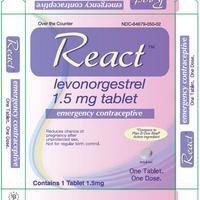 React is a preparation for an emergency contraception. The main component is levonorgestrel.

Emergency contraception in women with a regular menstrual cycle after unprotected sexual intercourse, and also in cases when the contraceptive method used cannot be considered reliable.

React may be used as an alternative hormonal contraceptive in the following emergency situations:

React – postcoital hormonal contraceptive for oral administration. It is a synthetic progestogen with expressed gestagenic and antiestrogenic properties. It provides an inhibition of ovulation, changes the endometrium, prevents the fertilized egg implantation. Moreover, it increases the cervical mucus viscosity, which prevents the sperm transferral through the uterine.

Given the recommended dosage, levonorgestrel does not significantly affect blood coagulation factors, fat and carbohydrate metabolism.

React is prescribed for an oral application. It is necessary to take 1 pill in the first 72 hours after unprotected sexual intercourse.

To reach a greater effect, the tablet should be taken as fast as possible after an unprotected intercourse (no later than 72 hours).

If vomiting takes place within 3 hours after the dose applied, the additional dose is not required. The effect is kept.

This emergency contraceptive drug can be used at any time of the menstrual cycle. In the case of an irregular menstrual cycle, you must first exclude pregnancy.

After taking an emergency contraceptive before the next menstrual period, barrier contraception methods should be applied (for example, a condom, a cervical cap). It is contraindicated to take Reach within one and the same menstrual cycle. If there is one more unprotected sexual intercourse try to find another method to protect from an unwnated pregnancy.

Take a caution when applying this drug in the following cases:

Transient side effects that occur at different frequencies and do not require any treatment:

The effectiveness of emergency contraception such as React can be decreased if you are also on an enzyme inducer preparations, such as some drugs used to treat:

If you have been treated with these medicines for the last 4 weeks, it is recommended to use non-hormonal emergency contraception, namely an intrauterine device with copper, or an increase in levonorgestrel dosage. Ask your doctor or pharmacist how to act in this way.

React is contraindicated during pregnancy. If the pregnancy occurred when using an emergency method of contraception, then scientific data shows no negative effects on the fetus are not revealed.

Levonorgestrel penetrates the breast milk. After taking the drug, breastfeeding should be stopped for 24 hours.