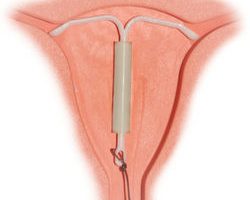 Skyla is a contraceptive intrauterine system, the rod of which looks like an elastic cylinder made of plastic and contains the hormone levonorgestrel. In order for the system to better fit the shape of the uterus, it is made in the T-shape. The levonorgestrel hormone contained in the intrauterine device is the most studied gestagene (semi-natural progesterone), and it is successfully used in various contraceptives. Skyla is over 99% effective.

The IUD device controls the monthly development of the inner shell of the uterus and also prevents the movement of semen into the uterus. When levonorgestrel enters the uterine cavity, it has a local effect on the endometrium, thereby preventing proliferative changes and decreasing its implant function. Thus, the endometrium can not reach the necessary maturity, as a result, pregnancy does not occur. Levonorgestrel promotes an increase in the viscosity of the mucus of the cervical canal, thus protecting the uterus from sperm penetration and thereby impeding the fertilization of the ovum. It can also be noted that levonorgestrel has a small systemic effect – the suppression of ovulation in an unlimited number of cycles.

The system is inserted into:

To introduce a device into the uterine cavity, some training will be required since this procedure refers to medical intervention. Before installing the system, it is necessary to undergo examination and cure all chronic gynecological diseases.

The IUD device is inserted on a 3-4 day of the period, because during this time the cervix is ajar, and this facilitates the process of introducing a contraceptive. In addition, the system can be installed immediately after an abortion, but on condition that the interrupted pregnancy was not more than 12 weeks.

In the first 3 years, Skyla releases 14 mcg of levonorgestrel daily. Gradually, the release of the active substance decreases and makes 5 mcg per day after 3 years.

Do not use Skyle if you have any of the following diseases or conditions:

In the very first months after the installation of the Skyla IUD, some side effects may occur. They tend to disappear within a couple of months and do not require additional therapy. One of the possible side effects is a change in menstrual bleeding, which indicates a physiological response to the effect of the device. Often there are irregular intervals between bleeding, spotting, heavy bleeding or pain during menstruation, complete cessation of menstruation, or prolonged menstruation. 12% of women had ovarian cysts in the period of using Skyla.

The use of the system can cause skin allergic reactions in some women. If such contraception proves to be not effective, there is the risk of developing an ectopic pregnancy. The intrauterine device can be very harmful, due to the fact that in some cases t may cause diseases of the pelvic organs, perhaps even serious ones. In addition, the use of the IUD can perforate the wall of the uterus.

Observations showed that using Skyla was accompanies by the following side effects: 1-10% of women complained of abdominal pain, nausea, pelvic or back pain, acne, weight gain, fluid retention, headache, mammary gland, nervousness, mood instability, depression, inflammation of the cervical canal. Less than 1% of women had infections of the genitals, hair loss or excessive growth, decreased sexual desire, itchy skin. And less than 0.1% of women complained of a migraine, urticaria, skin rash, bloating, eczema. Similar side effects have also been reported in cases of using Skyla for hormone replacement therapy in combination with estrogens.

Skyla can interact with:

Skyla is contraindicated in pregnant women. But if you suddenly become pregnant during its use, the system should be immediately removed. If the device remains in the uterus during pregnancy, there is a high risk of premature birth or an infected miscarriage. During a breastfeeding period, the use of this contraception method is possible – gestagens do not affect the quality and quantity of breast milk.