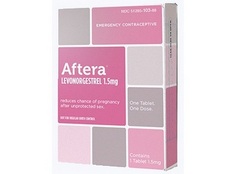 Aftera is a levonorgestrel morning-after pill which helps to prevent pregnancy when used within 72 hours after unprotected sexual intercourse.

Aftera levonorgestrel pill is only used an emergency contraception and is recommended for women with a regular period.

The active substance of the drug is levonorgestrel 1.5 mg, a synthetic progesterone. The consequence of taking such a high dose is a kind of hormonal impact on the woman’s body.

We can distinguish three mechanisms of action:

How to take a morning-after pill?

If vomiting occurs within 3 hours after taking a pill, the same dose of levonorgestrel should be taken again. You can use the drug on any day of your menstrual period.

If you have a regular sex life (sexual acts at least once a week or several a month), it is recommended to choose other methods of contraception that are safe.

When to expect menstrual bleeding after taking Aftera?

Menstruation should occur in accordance with an individual calendar, however, in some cases, there may be a minor period failure. Acceleration or delay of menstruation for 2-3 days after using a morning-after pill should not cause any concern.

In some cases, minor bleeding may occur in the middle of the period due to sudden hormonal changes and premature rejection of the endometrium. After using a pill in the second half of the period, brown discharge often appears.

If you used the drug and the bleeding did not occur on time, you need to wait a few days, because the drug may a delay menstruation. When the delay lasts more than a week, you need to visit a doctor and exclude pregnancy.

Use of a morning-after pill does not exclude the possibility of taking combined oral contraceptives. However, do not forget that you need to start using the latter from the first day of menstrual bleeding, in the opposite case, the effect will be reduced.

How effective is levonorgestrel emergency contraception?

The chances for successful termination of pregnancy depend directly on the time of taking a tablet after sexual intercourse:

The intake of food does not affect the efficacy of levonorgestrel 1.5 mg pill. Therefore, it does not matter when a woman takes a pill – before or after meals.

Contraindications for Aftera include:

The drug is used with caution:

Since levonorgestrel 1.5 mg pill contains a high hormone dose, its use can adversely affect the health of women. There is a high probability of uterine bleeding, which can only be surgically treated. The use of emergency contraception may cause disorders of the menstrual period, hormonal imbalance and anovulation. These effects can also cause infertility. A large dose of levonorgestrel can also cause side effects:

Common side effects of Aftera:

The interaction can decrease the contraceptive effect of a levonorgestrel morning-after pill.

The active ingredient of the drug penetrates into breast milk. Its maximum concentration is achieved in three hours after taking a tablet. The half-life shows a different time: 11 to 45 hours. A woman should stop breastfeeding for 24 hours after using the contraceptive pill.