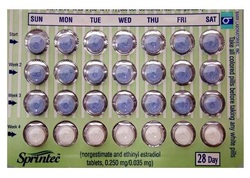 Sprintec is a combination oral contraceptive, the effect of which is determined by the central and peripheral mechanisms. Suppressing the secretion of gonadotropins, the drug prevents the maturation of eggs in the ovaries and ovulation. In addition, the drug increases the viscosity of cervical mucus, which makes it difficult for sperm to penetrate the uterus, and acts on the epithelium of the endometrium, reducing the likelihood of implantation.

The blister shows the days of the week. For the convenience of checking the regularity of taking tablets, it is recommended to start each new cycle with a tablet marked with a given day of the week and continue without interruption the entire reception cycle.

These contraceptive pills are most effective if taken at the same time of day, for example, in the evening.

Do not take Sprintec for birth control if you have any of the following conditions:

Sprintec may cause the following side effects:

When menstrual bleeding occurs, Sprintec use should be continued. If the bleeding does not stop, then a survey should be carried out to eliminate organic causes. Similar recommendations apply to bloody discharge, which may appear irregularly during several cycles of taking the pills or for the first time after prolonged use of the pills. If bleeding does not occur after you have taken the last pill, it is necessary to exclude the presence of pregnancy before starting a new package.

Important: Smoking cigarettes increases the risk of cardiovascular side effects from Sprintec use. This risk increases with age.

Contraceptive effectiveness of Sprintec pills may decrease in women taking antibiotics (ampicillin, tetracycline, rifampicin), barbiturates, antiepileptic drugs (hydantoin, carbamazepine), griseofulvin and phenylbutazone. The first manifestation of this interaction is menstrual bleeding. In such cases, other methods of birth control should be used.

If you miss an active pill of Sprintec, take it as soon as possible. The deviation from the usual intake time up to 12 hours provides a reliable contraceptive effect. The effectiveness of the drug decreases with a delay in taking the tablet for more than 12 hours. If the usual time of taking the drug is more than 12 hours or more than one pill is missed, the drug should be immediately resumed leaving a missing tablet in the package. However, before the end of this cycle, additional means of protection from pregnancy should be used (condoms, vaginal contraceptive suppositories, etc.). In such situations, one can not rely on the method of “safe days” or “temperature” method of contraception.

The drug is contraindicated for women who are pregnant.

The use of this hormonal contraceptive at an early stage of pregnancy can cause malformations of the fetus.

Small amounts of the drug may be excreted in breast milk. Influence of Sprintec on a body of the infant is improbable. However, breastfeeding women should not use hormonal contraceptives for oral administration until they stop breastfeeding.

You should use non-hormonal contraceptives during a breastfeeding period.